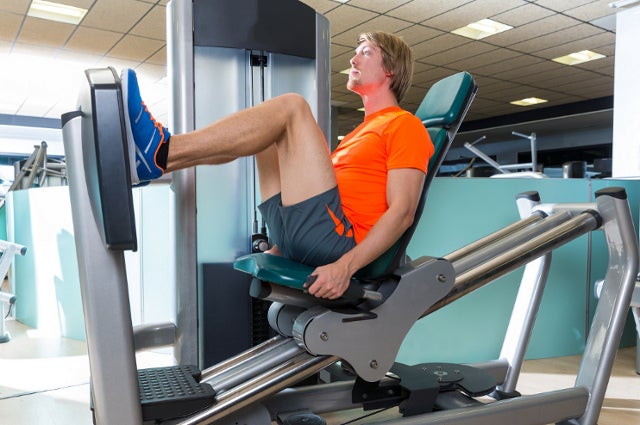 Scientists at Tufts have determined that leg muscle power—the capability of the leg muscles to rapidly exert force—is a more accurate gauge of the severity of knee osteoarthritis than simple leg strength, a finding that could lead to better diagnosis and treatment of the often debilitating disease.

Led by Kieran F. Reid, an exercise physiologist at the Jean Mayer USDA Human Nutrition Research Center on Aging (HNRCA) at Tufts, the study, which appeared in the journal Arthritis and Rheumatology, examined the relationships between leg muscle strength, leg muscle power and perceived knee pain in people with osteoarthritis of the knee.

“The key difference between training for building strength versus power is the speed at which the training is performed,” says Reid. “You can train on the same machines to develop strength and power, and with the same exercises—leg curl, leg extension, bicep curl, etc.—but to develop muscle power you have to perform the exercise very fast or as fast as you possibly can.”

Reid’s team collaborated with Chenchen Wang, a research professor at Tufts School of Medicine and director of the Center for Complementary and Integrative Medicine at Tufts Medical Center, who was running a yearlong trial to compare the benefits of tai chi versus physical therapy in patients with knee osteoarthritis. Reid’s team gathered their data by measuring the leg muscle strength and power of the study’s 190 men and women, who were aged 41 to 90 at the beginning of it.

Reid and his colleagues found people with greater leg muscle power reported less knee pain and better quality of life. Muscle strength, however, was linked to lower quality of life under some circumstances. Reid doesn’t believe those data are contradictory.

“We think power is a better way to evaluate the overall performance of skeletal muscle compared to strength,” he says.

Their findings bring some clarity to the scientific literature about the role of musculature in knee osteoarthritis. While some studies have found an association between more muscle strength and reduced pain—that is, stronger people felt better—others saw just the opposite. Measuring muscle power could eliminate the noise in the data.

Reid’s team assessed the strength and power mainly of participants’ quadriceps—the big muscles on the front of the thigh—but also that of other leg muscle groups including those in the buttocks, hamstring and calf. Participants were asked to perform a set of leg exercises known as a double leg press extension on an exercise machine. Seated, the subject brings knees to chest and presses a weighted plate away from the body.

“It is a very functional exercise that mimics activities of daily living,” says Reid. “When you walk, you plant your foot against the ground and exert force. The leg press exercise better simulates this action, versus a seated leg curl, for example.”

What’s more, improving muscle power instead of just focusing on strength training might prove to be a more useful clinical goal, says Reid, who works in the Nutrition, Exercise Physiology and Sarcopenia Lab at the HNRCA.

“In previous studies, we’ve found that, compared to muscle strength, muscle power is a stronger predictor of performance in tasks that are really important to older people and their physical independence, such as being able to get up out of a chair or climb a flight of stairs,” he says.

Focusing on building up muscle power could prove critical to staving off both osteoarthritis and mobility problems in an aging population that will only continue to grow as people live longer. While Reid’s team found that people with greater muscle power reported less pain and better quality of life, overall, the participants in the study were pretty frail. With an average age of around 60, this group’s muscle power was more in line with “mobility-limited older adults with a mean age of about 80 years,” the researchers write. Whether that’s a cause or an effect of their knee pain, Reid can’t say without further research.

But Reid wouldn’t hesitate to prescribe them exercise, especially based on his previous experience as a scientist on the Lifestyle Interventions and Independence for Elders study, led by Roger Fielding, a senior scientist and director of the Nutrition, Exercise Physiology and Sarcopenia Laboratory. That study, which focused on sedentary men and women ages 70 to 89, “really showed for the first time that we can prevent or delay mobility loss in at-risk older persons using a structured exercise intervention,” says Reid.

“We’re big advocates of having older people exercise,” says Reid, adding that more research is needed to determine the safest and most effective way to build muscle power in older people with knee osteoarthritis. “We know from the data that the older population tends to be the most sedentary, but they are also the most likely to benefit from exercise interventions,” he says.