The Diet and Disease Connection

Nutrition student learned firsthand about how food, microbiota and genetics affect our health 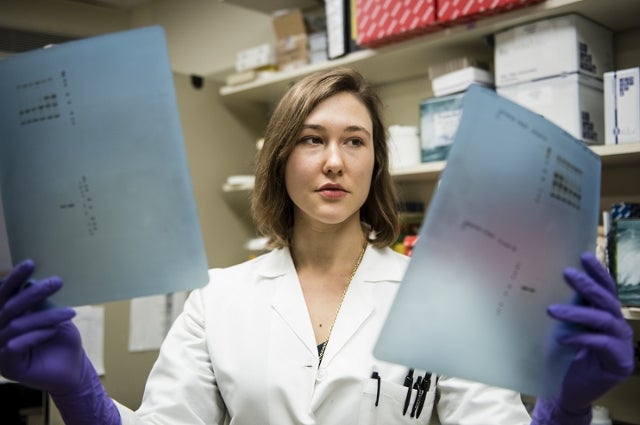 Alexandra Simas, a doctoral student at the Friedman School, is no novice at making connections between diet and disease. Her first patient was, well, herself. During her freshman year at Wellesley College, Simas was tired all the time. She dragged herself to class, and found it hard to keep up with the regimen of competing on the varsity swim team. She wondered if her diet contributed to her symptoms, which not only included gastrointestinal woes, but affected her muscles, her mood and her overall sense of well-being.

The problems became so severe she had to take time off from school. She spent the next two years on a nutritional odyssey of sorts, seeing physicians and investigating her family’s history of allergies, autoimmune disease, cancer and neurological disorders. She attacked her health problems with methodical precision, eliminating certain foods, addressing vitamin deficiencies, and changing what she ate to improve her microbiota, the trillions of microorganisms that make up the gut’s ecosystem.

After two years, she felt much better, and returned to Wellesley to complete her undergraduate studies in neuroscience. “It was really tough, but I wouldn’t trade that experience for anything, because it helped me to see firsthand how much genetics, diet and environment play a role in how your brain and body function,” says Simas, who’s pursuing a Ph.D. in biochemical and molecular nutrition.

Having discovered how empowering it was to crack the code on her own dietary enigmas, Simas came to Tufts to learn about personalizing nutrition recommendations. “This isn’t about changing what you eat to lower your risk of disease by a certain percentage,” she says. “It’s seeing the differences you can make in your health on a day-to-day basis.”

The Complexity of Humans

As part of her doctoral studies, Simas is working as a research assistant in the Obesity and Metabolism Laboratory at the Jean Mayer USDA Human Nutrition Research Center on Aging at Tufts. In collaboration with lab director Andrew Greenberg, she is trying to understand why some individuals—but not all—develop certain metabolic disorders, such as insulin resistance or non-alcoholic fatty liver disease, even though they eat the same things.

“How do we create a model for this incredibly complex human system that allows us to understand the nuanced effects of all these variables?” says Simas. “This is the big question that I hope to solve over the lifetime of my career.”

To do that, she believes health-care providers need to move beyond broad nutritional recommendations. “What we’re learning is there isn’t one right diet. A low-fat or no-sodium meal plan might help one person, but have no effect on another,” she says. She envisions a future in which physicians can tailor treatment based on a patient’s genetics and microbiota. “I hope we will be able to take an individual’s information, and then create a custom plan that gives them the tools to be the healthiest they can be.”

In addition to what she’s picking up in the lab, “I’m learning so much from my classmates through the student-run NEWtrition forum, which sponsors TED-style nutrition talks,” she says. “And the school-sponsored weekly policy talks have been fascinating, particularly about the economics of nutrition. Our research is only going to be useful if it’s economically feasible for people to make the changes we recommend.”

She says she’s particularly inspired by those she has met as a student representative on the Friedman School Alumni Executive Council. “I was recently talking with Bill Reid, [N90], who is working to improve communications between different hospitals and patient systems,” she says. “It’s so cool to see what these alumni are doing to make a difference in society as a whole.”

This kind of multidisciplinary focus is what brought Simas to the Friedman School. “Dr. Greenberg is always sharing findings from all different fields to see how they might apply to my research or illuminate new connections,” she says. “We’re tackling problems that are so multifaceted, and I want to be at a place where different disciplines, such as cell biologists and geneticists, are working to solve them together.”

Her education is made possible by Tufts’ Financial Aid Initiative, a program that matches donors’ gifts for endowed scholarships. Simas is supported by the Stanley N. Gershoff Scholarship Fund, named for a former dean of the nutrition school. “I know how lucky I am,” she says. “Without financial aid, I would not have been able to pursue my goals.”