Dogs: To Hug or Not to Hug 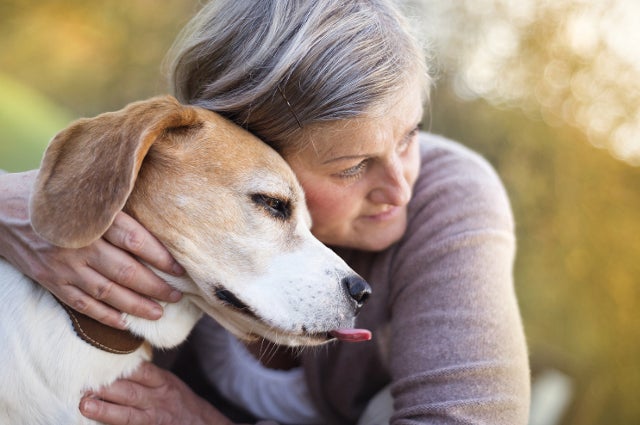 There’s been a lot of discussion recently about whether it is a good or bad thing to hug a dog. Does the dog like it or tolerate it, or does it cause the dog stress? The answer is, it depends.

Most importantly, it depends on who is doing the hugging, but also on when and under what circumstances the hugging is taking place. It’s the same for people. If I, a stranger, walked up to someone in the street and gave him or her a big hug, I am sure that person’s reaction would not always be a warm welcome. But if that person’s spouse or dear friend hugged him or her as a sign of affection or to comfort them, that same person would enjoy and appreciate the gesture.

I believe the same rules can be applied to hugging dogs. I know if I hug my dog when he’s resting on the couch, he relaxes completely and makes huffing pleasure sounds, and his eyes roll up in his head as if he feels he is in heaven. In the car, he will slowly creep onto the front seat to sit on my wife’s lap. She always puts her arms around him and he rests there like a baby, cuddled, coddled and nurtured by his other adored dog parent. It’s his choice, and that’s what he chooses to do.

I once unwittingly explored the mechanism of hugging with Temple Grandin. She wondered why pigs squeezed in V-troughs became calm and relaxed, and conjectured that nature’s own morphine-like substances, endorphins and enkephalins, might somehow be involved in the response.

In those days, I had spent quite some time looking into the role of endorphins in behavior and had all the doses down pat. We planned an experiment together. Here at Cummings School of Veterinary Medicine, we hoisted pigs into a comfortable padded V-trough and measured the time it took for them to relax.

One group of pigs was pretreated with saline (a placebo), and the other received a potent opioid antagonist, naltrexone. Naltrexone-pretreated pigs relaxed significantly more slowly. We published our results in a journal called Pharmacology, Biochemistry and Behavior in 1988. The conclusion was that what Temple called “lateral side pressure” (i.e., controlled hugging) released endorphins, causing the pigs to have a good feeling and thus to become more relaxed.

This is likely the mechanism for the pacifying effect of cattle chutes and Temple’s own invention, the squeeze machine, which is now used in some autistic centers to benefit the patients. Temple is adamant that use of the machines is rationed, because its effects are almost addictive. That would make sense if opioids were involved.

Interestingly, even though the controlled hugging of the squeeze machine was appreciated by Temple herself, she actually hated to be hugged in an uncontrolled way by, say, a well-meaning aunt. But wrapping herself tightly in blankets when she was young was pleasurable and relaxing.

The sustained calming and anti-anxiety effect of the right kind of hug is the principle underlying various pressure vests now sold commercially. One is the Anxiety Wrap, and another the Thundershirt, both used to reduce anxiety in dogs.

In one study of the Anxiety Wrap that we published, the device produced a 50 percent reduction in signs of thunderstorm phobia in dogs. There was no control for this study, so part of the benefit could have been attributable to the placebo effect, which is alive and well in veterinary medicine. It’s not that the dog expects to feel better and so does feel better when a certain treatment is applied, it’s that the owner can be biased by an enthusiastic prescriber of any treatment being administered.

Even if hugging is pleasurable to most dogs under the right circumstances, whether applied directly by a person or indirectly by a pressure vest, that certainly isn’t always the case, so cautions must apply.

So, as I said at the start, whether hugging is appreciated depends on who is doing the hugging and when. Owners who are in tune with their dogs will know exactly the right moment for the embrace. Strangers may or may not be welcome to engage so personally, so it’s probably best if they don’t even try.

This “lateral side pressure phenomenon” is probably the basis for the calming effect of swaddling babies, as well as the foundation for the appreciated effects hugging in general. It’s enjoyed by some under some circumstances, but not by all under all circumstances. If anyone had told me earlier in my career that I was at one time going to be studying the biochemical underpinning of hugging/lateral side pressure, I wouldn’t have believed it. But then it happened. Strange but true.

Nicholas Dodman directs the Animal Behavior Program at Cummings School of Veterinary Medicine. He has authored several best-sellers, including The Well-Adjusted Dog.