Tularemia on the Tube

One of the world’s foremost researchers studying the obscure but highly infectious, potentially fatal disease discusses how it figures into the plot of “The Americans” 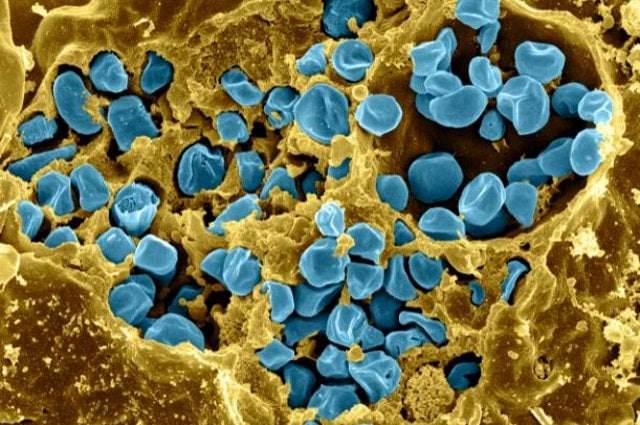 The Cold War race to use diseases as weapons is driving much of the action this season on FX’s The Americans, the critically acclaimed television drama in which two Soviet intelligence agents pose as a married couple to spy on the American government. The protagonists pick up a most important package from another Russian secret agent working at the CDC: a jar containing a dead rat infected with tularemia. The Soviets are anxious to get the rodent back to the motherland to add to their arsenal.

Tularemia’s relative obscurity left this ardent viewer with a lot of questions about possible plot holes and the history of the disease. As luck would have it, one of the world’s foremost tularemia experts happens to be Sam Telford, a professor of infectious disease and global health at Cummings School of Veterinary Medicine and director of the New England Regional Biosafety Laboratory, a state-of-the-art biosafety level 3 facility where regional researchers can safely work with infectious diseases such as tularemia. He provided Tufts Now with the following real-world perspective on the fictional Russian spies’ dilemma.

Tufts Now: What exactly is tularemia?

Sam Telford: It’s a nasty disease; one of the sickest people I have ever seen was someone infected with tularemia. It is caused by Francisella tularensis, a bacterium that typically infects rodents, rabbits and hares, which die off in large numbers during an outbreak.

But tularemia also can infect humans if they are exposed to an infected animal, living or dead; are bitten by an insect carrying the disease; or inhale contaminated dust. The disease’s more common name, rabbit fever, hails back to before the 1960s, when rabbits were raised for food, and when market-rabbit handlers and processors and wild-rabbit hunters were the main risk groups for the disease.

The most severe and life-threatening form of the disease involves the lungs. Known as pneumonic tularemia, it causes coughing, chest pain and difficulty breathing. Untreated pneumonic tularemia was once fatal in 30 to 40 percent of cases, but today antibiotics are very effective in treating the disease if it’s diagnosed early enough. But there’s no doubt this highly contagious bacterium could quickly incapacitate a large number of people, which is why there historically has been so much concern over—and interest in—developing tularemia as a biological weapon.

Would a rat dead from the disease truly have been such an advantage for the KBG at that time? Is tularemia not endemic to the former Soviet Union?

The Russians actually have recorded hundreds of thousands of cases of tularemia in the last 80 years, and the disease has been a subject of much study there since the 1920s and ’30s. That research accounts for much of what is known about the disease, and ironically, given the show’s plot, the Soviet government actually provided the U.S. with the tularemia vaccine that’s still used today by our military. They did that during the height of the Cold War, no less. I have been inoculated with that very vaccine, because of my tularemia research on Martha’s Vineyard.

However, in Russia and other nearby countries such as Sweden, tularemia tends to pop up in field mice and muskrats, and is transmitted to people primarily via mosquito bite or by contact with soil contaminated with dead rodents. Eurasia has a different, usually less virulent strain, one that would rarely cause fatalities. So if the Soviets did not have the American strain, yes, obtaining it would be a worthy objective for a military bioterrorism program, because it is significantly nastier than what they have in Europe.

Could you even get a usable version of the disease out of a dead rat, especially one stored in a freezer?

You could culture the bacterium responsible for tularemia from a dead rat. The bacterium could survive in a freezer for a few weeks and would be viable if that rat was quickly transported to Russia.

But from the show’s plot perspective, I’m not sure that bringing a dead animal over from the U.S. is historically accurate. The prototype American strain, SchuS4, was provided to Moscow’s Institute of Virology in 1949. Tularemia cultures were not regulated by our government then as they are now. And our military scientists probably received cultures of glanders—a serious bacterial disease affecting horses that also figured prominently in The Americans this season—from the Soviets, not the other way around.

Why are you studying tularemia on Martha’s Vineyard? 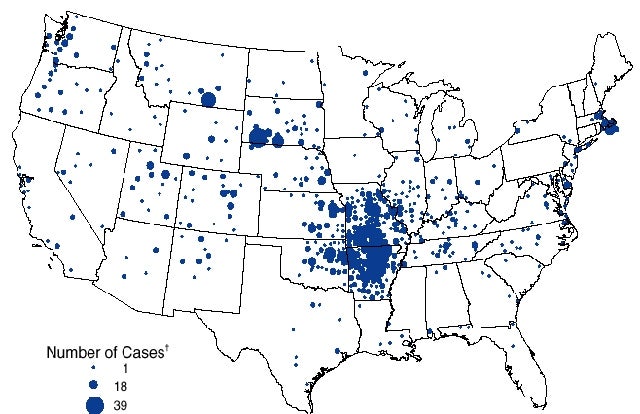 Reported cases of tularemia 1990-2000. Image: CDC/MMWR
The island is a fascinating anomaly in terms of the disease’s activity and ecology. Usually when tularemia pops up in rabbits or other wildlife species, it quickly kills off that animal population and doesn’t reappear in that same area for many, many years.

But there have been 120 or so cases on Martha’s Vineyard in the last 15 years. In fact, of the roughly 150 cases reported to the CDC annually, about 10 percent will be from the island. More than half of that 10 percent will involve the more dangerous inhalation-acquired pneumonic form of the disease. What’s curious is that although tularemia in general is more common in the Midwest, inhalational tularemia is rare there.

From 1978 to 2015, the island was the only place in the U.S. where pneumonic tularemia developed because of inhalation of the bacterium. Everywhere else, the bacterium spread to the lungs after an infection acquired by tick bite went untreated. People affected by outbreaks on Martha’s Vineyard are usually landscapers, and they probably catch the disease while doing work such as mowing grass, brush cutting or leaf blowing that could stir up dust contaminated by the remains of an infected animal.

How does the tularemia bacterium survive?

Normally, exposure to the elements—sunlight, microbes in the soil, and rainwater—should kill off the bacterium responsible for tularemia fairly quickly, long before it can spread via the environment. But Zenda Berrada, who in 2008 became the first Ph.D. graduate from Cummings School, suspected that the sea-spray environment of Martha’s Vineyard might help the bacterium to survive longer than usual and therefore spread more easily through dust. When she studied the bacterium in the lab, she found that indeed it does survive for much longer periods of time in a mixture of salty versus regular water. There’s not a lot of salt in the soil in Missouri or Kansas; hence there are fewer inhalation cases.

We don’t completely understand why the disease doesn’t die off on Martha’s Vineyard along with the infected wildlife as it does everywhere else. But we have a hypothesis. The dog ticks on the island might serve as a reservoir of tularemia, keeping it circulating in the mammals there. We’re still working on figuring out what’s unique about this particular tick population.