When James Levine, A96, composes music for top shows like "Glee," "Nip/Tuck" and "Rizzoli & Isles," the heat is always on 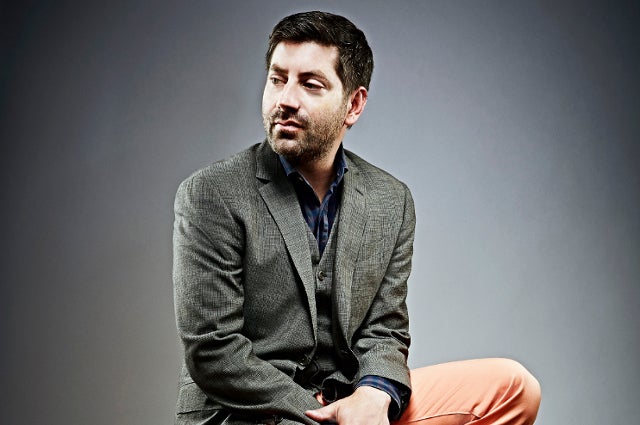 One Sunday night 13 years ago, James Levine, A96, got a phone call asking if he could come in to work early the next morning. Sure enough, at 8 a.m., he reported to the film composer Hans Zimmer’s recording complex, where he learned that Zimmer’s composition team—of which he was a member—had a score to knock out for Something’s Gotta Give, a romantic comedy starring Jack Nicholson and Diane Keaton.

The good news was that they already had a main theme. The bad news was that it had to be turned into a complete two-hour score, with music for every interlude, cue and background flourish, by the time the orchestra was scheduled to begin recording. In four days.

“I’ve repressed a lot of memories, and I’m not even joking because you kind of have to if you’re going to do this,” Levine says with a laugh. “Everybody went into their respective writing rooms, and Hans and the music supervisor would go from room to room: ‘That’s good, that’s not, come over and listen to this one, too.’ And Friday morning, the orchestra was there and it got done. It was completely crazy, but every single person who was asked to work on it just said, ‘Of course.’ We’re all musicians, and musicians don’t turn down gigs, because you never know which one will turn out to be The One.”

Actually, Levine is the rare soundtrack composer who has had multiple iterations of The One. He’s among the top composers in the field, the musical voice of shows including Glee, Nip/Tuck, Major Crimes and The Closer. He’s worked on plenty of big-screen scores, too—among them Michael Bay’s 2001 war epic Pearl Harbor, the 2005 animated hit Madagascar, and Ryan Murphy’s 2006 adaptation of Running with Scissors.

Levine doesn’t have a signature style so much as an impressive versatility: he adapts to different characters and moods, whatever is called for. His work has earned him 14 BMI and ASCAP awards, as well as raves from peers like James Duff, a TV producer with whom he has worked on more than 160 episodes of Major Crimes and The Closer.

“There are times when I don’t know whether it’s the character or Jimmy’s music speaking,” says Duff. “Seriously, he’s that good. His music tends to enhance a performance instead of just underlying it. And where a lot of composers use variations on the same themes over and over, virtually every note on Major Crimes is new music by James Levine. He’s a rare talent—a storyteller as well as a musician.”

That Kid Who Plays the Piano

Levine grew up in Medford, Massachusetts, learning piano and playing in bands. Music was his passion, but he came to Tufts to pursue a pre-med program because his dad was a pediatrician. “I had this idea that if music didn’t work out, I’d become a doctor,” he says. “Well, it doesn’t really work that way unless you’re a lot more gifted at science than I am.”

The classes Levine felt most passionate about were in sociology, so he switched to American studies and focused on ethnomusicology, with a thesis on gospel music. After graduation and a year as a journeyman pianist playing weddings, parties and cruise ships, Levine moved to Los Angeles in 1997. He started out as a studio gopher with the composer Jeff Rona and then Zimmer, delivering a lot of packages and making a lot of coffee.

Eventually, he caught the ears of some staff composers at a late-night jam session. He became known as “that kid who plays piano,” doing session gigs that led to composing work of his own. His four years working with Zimmer, starting in 1999, were particularly formative. “The most important thing I learned from him was how to listen in a meeting, as well as to think of myself as a storyteller,” Levine says. “I learned that the story is the most important part of the final product.”

Toward the end of his time with Zimmer, Levine met P.J. Bloom, a music supervisor working with the writer-director Ryan Murphy on Nip/Tuck, a new dramatic series about plastic surgeons. Levine went on to compose music for 100 episodes during the show’s eight-season run. “That was my big break,” he says. “I was young and didn’t care about anything but writing music, and we did not know what would happen with this show—up until it did. People just fell in love with it.”

Now in constant demand, Levine must work so fast that composing is almost instinctual. But sometimes that leads to inspired bits like the theme for Jane Lynch’s devious coach Sue Sylvester character on Glee. “We were really struggling with how to represent her, because Jane’s performance is just so strong,” Levine says. “And late one night in the studio, the idea came up: ‘What about a marching-band drum corps?’ We threw up some of that with her onscreen and it was, ‘Yep, that’s her!’”

It’s all part of telling stories while under constant pressure. “I always want to surprise viewers and people I work with, give a sideways glance to characters and material,” Levine says. “When you get into the right mindset, the lack of time is actually cool. You have to let things go, let your process be open to surprises. You can’t put too much thought into it, just paint that canvas quickly.”

David Menconi is the music critic at the News & Observer in Raleigh, North Carolina.

This article first appeared in the Spring 2016 issue of Tufts Magazine.