Last year’s commencement saw 7,000 meals, and only two bags of trash. Can we do even better this year? 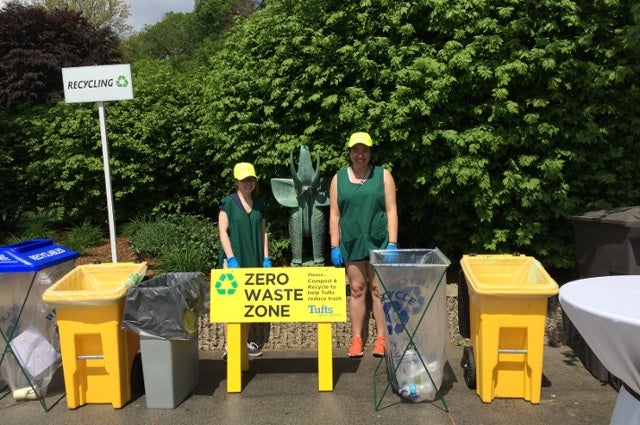 After last year’s main commencement exercises, some 7,000 graduates and guests flooded across the Tufts hillside for lunch. When they were done eating, their trash barely filled two bags.

Yes, you read that right—7,000 diners, two 60-gallon bags of trash. The zero-waste efforts of the university’s facilities and dining operations were able to divert the lion’s share—or, shall we say, the elephant’s share?—of lunch refuse to recyclable or compostable materials. Their goal is to have a similarly light load at this year’s commencement on May 22—or perhaps to reduce it even further.

“That’s probably the best result I’ve seen in my 30 years in higher education,” says Gary Hill, director of campus services for the university. “We’ve got our work cut out for us.”

The key to cutting down on waste was reinventing the box lunch that had become a staple of graduation day. While the boxes had filled an important need—guests could carry them easily, particularly if they were heading across campus to a venue for the second phase of the ceremonies—they had also contributed to “volumes and volumes and volumes” of waste, says Patti Klos, director of dining and business services.

Diners had tended to put all their trash—leftover food, wrappers, water bottles—into the boxes and then dump the whole thing. After the crowds had gone, student workers would sift through the trash, salvaging what could be recycled or composted, says Betsy Isenstein, director of facilities technical services. And because the lunch crowd had little control over the contents of the boxes, a lot of uneaten food would go to waste.

The new green lunch, which debuted in 2015, replaced the box with a paper bag decorated with Jumbo and a congratulatory message to the graduating class on one side, and an illustration of how to dispose of the lunch items on the other. Guests could choose the food to put in the bag: this year the selections will be a sesame noodle salad with either chicken or tofu (the vegan version is made with rice noodles, so it’s also gluten-free) in a recyclable plastic container, strawberries, a recyclable bottle of water, and either a blondie, a vegan craisin-walnut bar or a gluten-free brownie.

“When you’re designing a zero-waste lunch, you have to think very carefully,” Isenstein says. “No little foil pats of butter, no little packets of ketchup—none of those things we’re used to seeing in a lunch that’s handed to us. So I say hats off to dining services for figuring this out.”

Under the new system, the amount of food waste that was collected for composting grew by almost 200 pounds, from 520 pounds in 2014 to 700 pounds in 2015, Isenstein says.

A casualty of the sustainable lunch was the chocolate Jumbo elephants that had been a popular part of the box lunch. Because they had to be individually wrapped, they didn’t make the cut. Besides, they melted quickly if commencement fell on a particularly hot May day. But visitors were delighted by the decorated bags, which many wanted for a keepsake, says Hill.

And those two bags of trash that were collected last year? A good part were items that had been brought in from off campus, such as non-recyclable Styrofoam coffee cups. So if you’re headed to this year’s commencement ceremony and need your morning jolt of java, a travel mug might be in order.