A Jumbo Year in Athletics 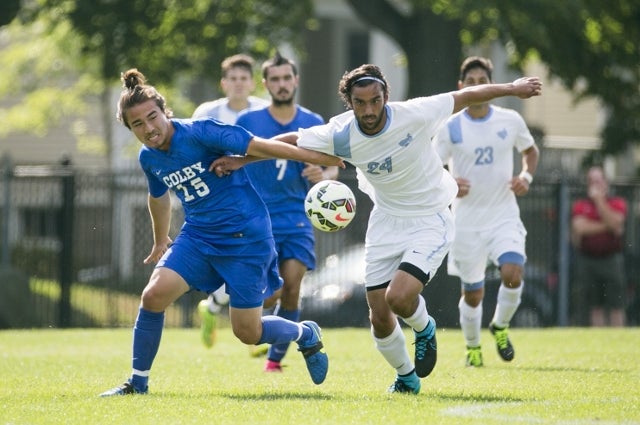 With two teams in the running for national championships and a student-athlete who received the NCAA’s highest scholarship award, Tufts Athletics had an outstanding year. The university placed fourth out of more than 400 Division III colleges and universities in the Learfield Sports Directors’ Cup final standings, for which points are awarded based upon NCAA team performances. Jumbos also earned 313 Academic All-New England Small College Athletic Conference (NESCAC) honors this year, including the league’s top total of 140 recipients this spring.

“This breadth of achievement, both academically and athletically, is what Tufts Athletics is all about,” says John Morris, director of athletics. “It’s a testament not only to the dedication and hard work of our talented coaches and student-athletes, but also to the tremendous support they receive from the university and our many loyal alumni, fans and friends.”

BASEBALL — Finishing with a school-record 35 wins, head coach John Casey’s team won the NESCAC championship for the fourth time since 2002. Tufts advanced further in the NCAA tournament than any other New England team, reaching the regional finals. Pitcher Speros Varinos capped his outstanding junior season by being named to the D3baseball.com All-America third team. 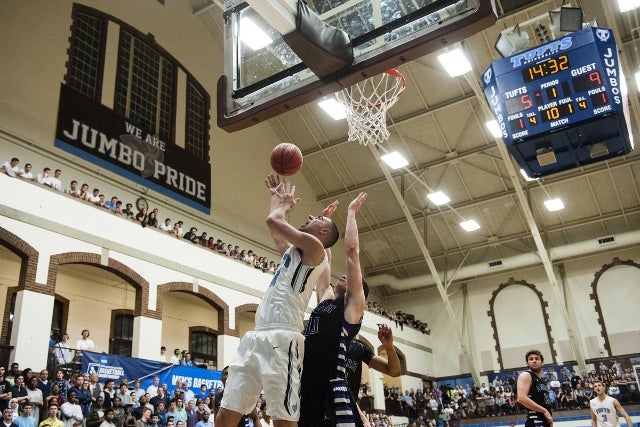 Guard Stephen Haladyna, A16, goes up for a shot against Amherst College in the Elite Eight round of the NCAA Division III tournament on March 12. Photo: Alonso Nichols
MEN’S BASKETBALL — The Jumbos earned an NCAA tournament berth for the first time since 2006 and hosted NCAA regional and sectional games in front of huge crowds at Cousens Gymnasium. Head coach Bob Sheldon’s team advanced to the national quarterfinals and finished with a 23-7 record—the most wins by the team since 2006. 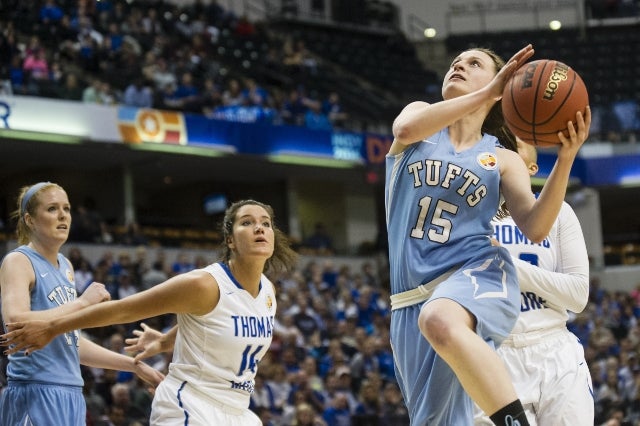 Guard Emma Roberson, A16, takes a shot against the Thomas More College Saints in the NCAA Division III championship on April 4. Photo: Alonso Nichols
WOMEN’S BASKETBALL — Advancing to the NCAA Final Four for the third consecutive season, the Jumbos played in their first national championship game on April 4 in Indianapolis. Though they lost 63-51 to Thomas More, the Jumbos finished the season with a 28-4 record and have an impressive 88-10 record over the last three seasons. Head coach Carla Berube’s squad also posted its third straight perfect 10-0 NESCAC season. Junior Michela North was one of 10 players in the country picked to the Women’s Basketball Coaches Association All-America Team.

WOMEN’S CROSS COUNTRY — Head coach Kristen Morwick’s Jumbos finished off a great season with a seventh-place effort at the NCAA championship race. The showing was the best by the Tufts women at  nationals since 2006. In the three weeks before NCAAs, the Jumbos sandwiched runner-up performances at the NESCAC and NCAA regional championships around a first-place finish at the Eastern College Athletic Conference (ECAC) meet. 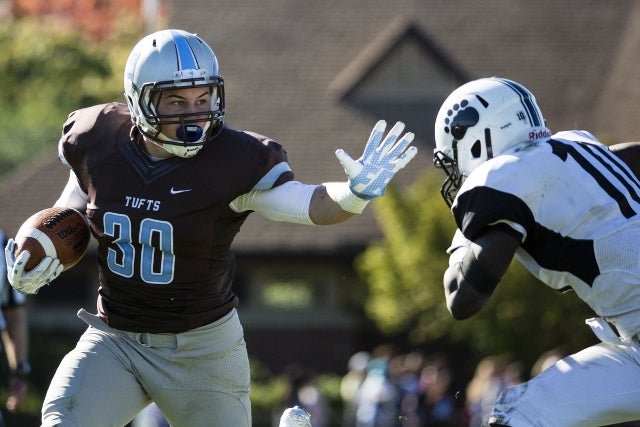 Running back Dominic Borelli, A19, fends off a Bowdoin player on Oct. 10. Photo: Alonso Nichols
FOOTBALL — Two years removed from a 31-game losing streak that was the longest in the nation at the time, the Jumbos continued a remarkable turnaround by finishing 6-2 for third place in NESCAC. The 2015 season was the best at Tufts since 2001. Head coach Jay Civetti’s Jumbos were 4-0 on the road, including a 30-15 victory at Williams College that was the program’s first win in Williamstown since 1981. Tufts capped its 6-2 record with a 31-28 victory at home against Middlebury, beating the Panthers for the first time since 2001. Junior running back Chance Brady was voted NESCAC Offensive Player of the Year. 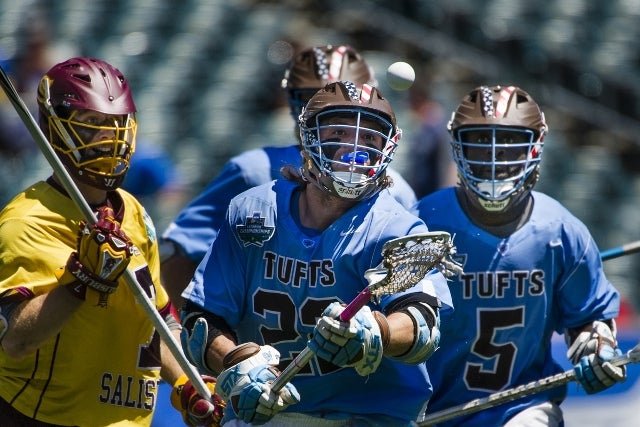 Midfielder Conor Helfrich, A16, comes up with the ball in the Division III NCAA championship game on May 29. Photo: Alonso Nichols
MEN’S LACROSSE — Tufts advanced to the NCAA championship game for the third year in a row and fifth time overall. The Jumbos lost a dramatic final 14-13 to Salisbury to finish the season with a 20-3 record. Tufts scored 99 goals in five NCAA games, the most ever in one tournament. Head coach Mike Daly’s team also won its seventh consecutive NESCAC championship, with a 16-10 victory over Middlebury. Eight Jumbos were named All-Americans, including national Co-Player of the Year John Uppgren.

MEN’S SOCCER — Tufts received its fifth NCAA tournament berth, including three in the last four years under head coach Josh Shapiro. They advanced to the third round, after scoring two goals just three minutes apart late in regulation to earn a stunning 3-2 win at host Montclair State in the second round. 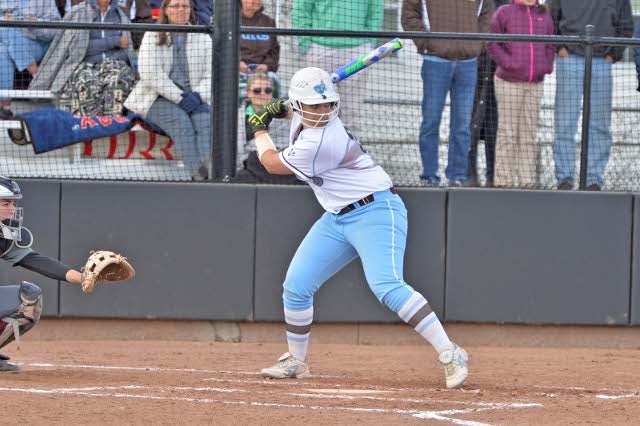 MEN’S SWIMMING & DIVING — Swimmers Michael Winget and Kingsley Bowen, along with diver Matt Rohrer, each came home with a pair of All-American honors (top eight) following a strong four days for the Jumbos at the national championship meet in Greensboro, North Carolina. With the points scored by these All-American finishes, head coach Adam Hoyt’s men’s team earned 12th place at the NCAA meet. That’s the best showing at the nationals since the 2006 squad was 10th in the nation.

WOMEN’S SWIMMING & DIVING — Coach Hoyt’s Tufts women returned from the NCAA meet with two honorable mention All-American times. Freshman Colleen Doolan was 12th in the 200 butterfly, with a 2:04.11 mark, and Amanda Gottschalk recorded 2:19.04 for 12th place in the 200 breaststroke.

WOMEN’S TENNIS — Tufts made the NCAA tournament for the 15th time in the last 16 years, and advanced to the third round to finish with a 12-8 record. Head coach Kate Bayard’s squad was ranked ninth in the final Intercollegiate Tennis Association national poll. The Jumbos featured NCAA singles qualifier Lauren Louks, as well as the NCAA doubles qualifying duo of Louks and Mina Karamercan. Both players were All-Americans. 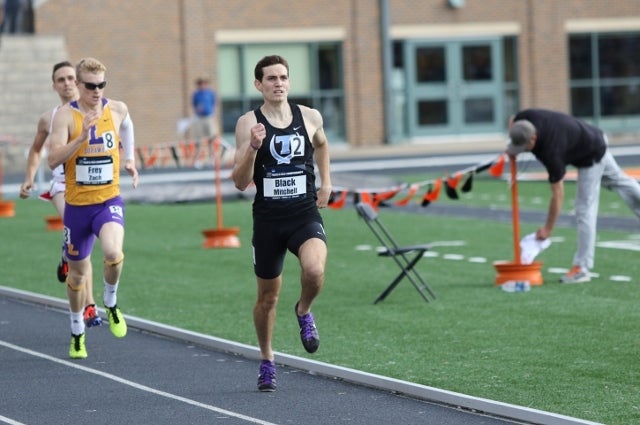 Mitchell Black, E16, wins his second consecutive outdoor title at the 2016 NCAA Division III outdoor track and field championships in Waverly, Iowa, on May 28. Photo: D3Photography.com
MEN’S TRACK — Mitchell Black, E16, completed his career as one of the most accomplished student-athletes Tufts has ever seen. He was one of two student-athletes in the country to be awarded the NCAA’s 2016 Walter Byers Postgraduate Scholarship, and is the first recipient from the NESCAC. The program awards a $24,000 scholarship each year to one male and one female scholar-athlete selected from a pool of applicants from NCAA Division I, II and III schools. Black won the NCAA 800 meters national championships indoors and outdoors for the second straight season, and finished as a 10-time All-American. Distance competitors Tim Nichols and Luke O’Connor earned All-American awards outdoors, helping Tufts post a best-ever 15th-place NCAA finish. Veer Bhalla took All-American honors in the NCAA indoor 800. 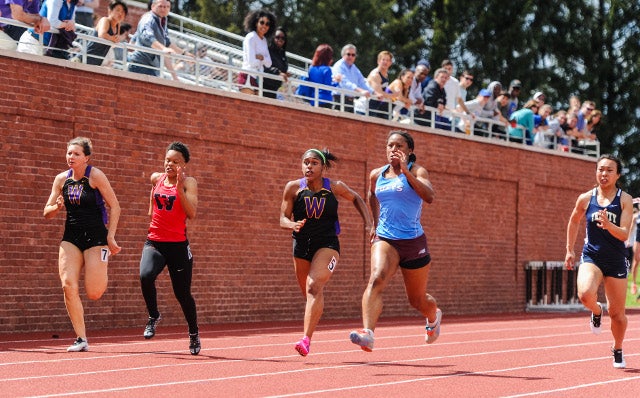 Senior Alexis Harrison sprints ahead of the competition. Photo: Geoffrey Bolte/Clarus Studios
WOMEN’S TRACK & FIELD — Senior Alexis Harrison won three individual events and was part of a relay victory at the 2016 NESCAC championship meet, repeating as NESCAC’S Most Outstanding Performer this year. She won the 100-meter dash (11.88), the 200-meter dash (25.40), and the long jump (18’6” / 5.64m), while also helping the Jumbos’ 4x100-meter relay win the conference title for a fourth consecutive year (48.98). In the winter, Harrison was the NCAA runner-up in the 60 meters. Sydney Smith was an All-American for the Jumbos indoors in the mile run and outdoors for the 1,500 meters.
Sports