Mark Pokras, conservationist and professor emeritus, is known for his work on lead poisoning in wildlife

A lecture series at the Summer Star Wildlife Sanctuary in Boylston, Massachusetts, has been named in honor of Mark Pokras, V84, an associate professor of infectious disease and global health emeritus at Cummings School of Veterinary Medicine.

Pokras, who directed the Tufts Wildlife Clinic from 1995 to 2008 and is one of the founders of the Tufts Center for Conservation Medicine, has devoted his career to continuing education for veterinarians, wildlife rehabilitators and the public. 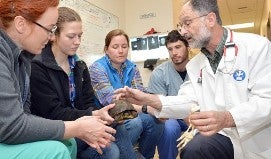 Mark Pokras with students at Cummings School of Veterinary Medicine
His research on lead poisoning in loons led to bans on lead fishing tackle in a number of states. In 2014 he was elected to the Cummings School Faculty Hall of Fame for his work advancing wildlife conservation.

Naming the lectures series after Pokras was a natural, says Shalin Liu, founder of the Summer Star Foundation for Nature, Art and Humanity. “He has devoted his whole life to wildlife. He has given them a voice.”

“I am honored,” says Pokras, who noted that the news came as a surprise. “I came out to do an April lecture [at the sanctuary], and I thought, Well, the introduction should take five seconds, and then Shalin announced she was naming the lecture series after me. Talk about jaw hitting the floor. I was stunned.”

Liu met Pokras through her daughter, who had taken classes with him at Cummings School. She invited him to lecture at Taiwan’s Institute of Wildlife Conservation, of which she is a benefactor. She went on to underwrite research and travel expenses so Cummings School students interested in conservation medicine could gain field experience at the Pingtung Rescue Center for Endangered Wild Animals.

When Liu started looking for the ideal property for a nature center, she turned to Pokras for guidance. They settled on 45 acres in Boylston. The sanctuary now includes woodland trails and a visitor center, which won the 2015 Green Building of the Year Award from the U.S. Green Building Council of Massachusetts.

Visitors to the sanctuary can watch live video feeds of raptors regaining their strength in the Shalin Liu Healing Cage at Cummings School.

The next presentation in the Mark Pokras Lecture Series, which is free and open to the public, is Saturday, July 16, at 11 a.m. at the sanctuary, 690 Linden St., in Boylston. Tom French, assistant director of the Department of Fisheries and Wildlife for the Massachusetts Natural Heritage and Endangered Species Program, will talk about the state’s efforts to protect bald eagles and peregrine falcons. Stephany Lewis, V15, an intern at the Tufts Wildlife Clinic, will give a presentation on avian muscle disease, which can occur when birds undergo rehabilitation for an injury.

RSVP to Summer Star Wildlife Sanctuary at 508-869-3434 or info@SummerStarWildlife.org.