Intrigue Among the Fireflies

Sara Lewis tells of the courtship rituals—and deceits—of lightning bugs, and explains why we need to protect their habitat 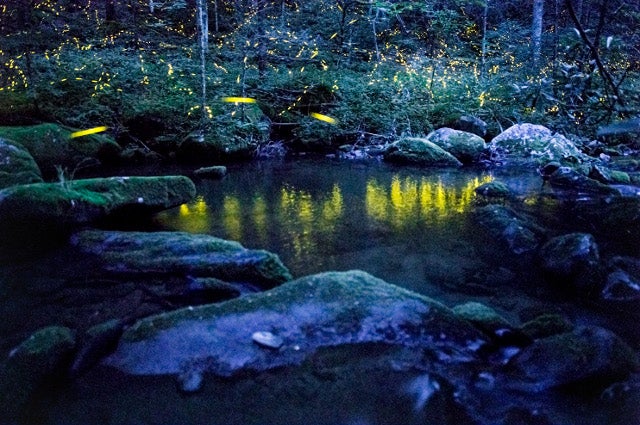 Enthralled by nature as a child, Sara Lewis knew by the time she was 8 years old that she wanted to be a biologist. After graduating from Radcliffe, she went on to Duke, focusing her graduate studies on tropical reef biology, specifically the delicate balance between corals and seaweed. But one warm summer night in North Carolina, she fell under the spell of another fascinating creature: the firefly. Its glittering mating rituals beckoned, and today the Tufts biology professor is an expert on firefly sexual reproduction—in particular, she says, “what happens inside the female firefly after the lights go out.”

Now she has brought this piece of her research and other recent discoveries about fireflies to a popular audience with a new book, Silent Sparks: The Wondrous World of Fireflies (Princeton University Press). Fireflies’ lives span “birth, courtship, romance, sex, deceit, poison and death”—not to mention their uncommonly sophisticated chemistry, biology and social behavior, Lewis says. As she reveals the complex science behind firefly magic, she doesn’t lose sight of her other key objective: to be a captivating storyteller. Among other wonders, she writes about the “breathtaking spectacle” of visiting a Tennessee forest where blue ghost firefly males flit through their nocturnal dance in search of females.

Tufts Now talked with Lewis about what she hopes her book will spark in readers.

Tufts Now: What was your main goal in writing the book?

Sara Lewis: First and foremost, it was to introduce the science behind the spectacle of fireflies. There had been a lot of new scientific discoveries about fireflies over the past 30 years, but these were invisible to 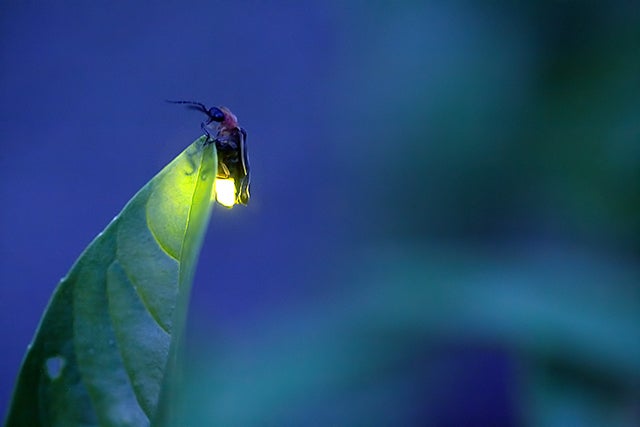 “As I was writing the preface, I realized it felt important for me to convey my own sense of wonder about fireflies,” says Sara Lewis. Photo: © Radim Schreiber
most people—they were hidden away in the scientific literature. I wanted to make them accessible to all the firefly lovers who were out there. I also wanted to get people outside to experience the wonder and magic of fireflies in their backyards and neighborhood parks. I was giving a book talk recently in Brooklyn, and afterward I took people to Prospect Park for a firefly walk. There were fireflies everywhere. People were so excited. I really want people to step away from their digital devices and step outside—to go into the night and reconnect with the natural world.

Fireflies put on amazing light shows around the world, and they always inspire wonder and awe. What gives them this global appeal? 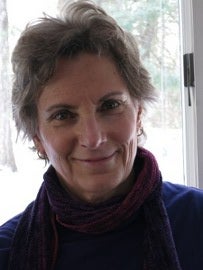 “I really want people to step away from their digital devices and step outside—to go into the night and reconnect with the natural world,” says Sara Lewis. Photo: Karen Lewis, G72
Honestly, I really don’t know. But it’s true: in every single human culture on the planet fireflies are admired, revered—they are a big deal. For one thing, bioluminescence is really fascinating. How do creatures make light? How have they evolved to shine energy out of their bodies? It’s really remarkable.

Part of it also is nostalgia for childhood summers. So many people, especially in the United States, grew up spending a lot of time outdoors and remember chasing fireflies through the fields and capturing them in Mason jars—they have a deep emotional connection to fireflies. Another magical thing about fireflies is how they can transform an ordinary landscape—your backyard, the banks of a river—into something ethereal and otherworldly.

You write in the preface about “working hard to stay susceptive to wonder,” and how the book represents “my coming out.” Talk about that.

Yes, I actually wrote the preface last. Originally I considered the wonder of fireflies as a hook to get people interested in learning more about the science. But as I was writing the preface, I realized it felt important for me to convey my own sense of wonder about fireflies—so it turned out to be much more than a hook.

Because I am a scientist, I would never say that in a scientific paper or in a scientific talk, although I think all scientists are motivated by a sense of wonder on some level. But it’s not the kind of thing you talk about with colleagues. Once I realized that and I wrote the preface, I thought, Oh, wow, am I really going to say this? And I thought, Yes! Why not? This is important to me.

Your research into firefly mating expands our view of how fireflies have been shaped by the “evolutionary game of sexual selection.” Your book describes their mating rituals, how the males use quick flashes to attract a female, and how a flirtatious flash exchange ensues. But you also reveal that these blinking lights are merely the beginning of firefly sex.

Fireflies’ courtship signals are highly visible, so anyone can watch the whole interaction and figure out what makes one male more attractive to a female than another, and which males will be more likely to mate. But then there’s another stage of sexual selection that happens after mating. Because this happens inside the female reproductive system, no one had ever looked at that.

Fireflies have long fascinated people the world over. This woodblock print triptych by Japanese artist Utagawa Kuniyoshi, “Catching Fireflies in the Cool of the Evening,” dates to around 1850.
When I started as an assistant professor at Tufts, I spent an entire summer dissecting pairs of fireflies that were frozen in the act of mating, and trying to figure out what was going on inside those fireflies. Several students, both undergraduate and graduate, and I spent several later summers painstakingly marking individual fireflies with tiny, different-colored dots of paint. With that color coding, we could follow female fireflies over several nights.

We discovered that female fireflies don’t just mate once in their lifetime, lay their eggs and then die. They mate several times, over the course of a couple of weeks. And that changed everything. The evolutionary process of sexual selection continues after mating, as all the mating males compete to father the female’s offspring.

We discovered that the male gives the female not just sperm, but also a nutrient-rich package called a “nuptial gift.” We suspected these were valuable; females need a lot of protein to make eggs. Our research found that indeed females that receive more nuptial gifts produce more eggs, and also that females that get bigger gifts live longer. We went on to find that the males who give longer flash signals also give larger gifts—although we found this was not true with another closely related species.

Watch Sara Lewis’s popular TED talk about the lives and loves of fireflies.

It’s clear that people connect to the ethereal, magical quality of fireflies. But your book also describes a surprising “dark side” to fireflies. Could you say more about that?

Many fireflies contain nasty-tasting chemicals that deter birds and other insect-eaters. In fact, scientists have discovered that firefly light first evolved as a warning: it’s like a neon sign that shouts, “I’m toxic, stay away!” It wasn’t until much later that some fireflies co-opted this bioluminesence talent and turned it into a courtship signal that could be used to attract mates. 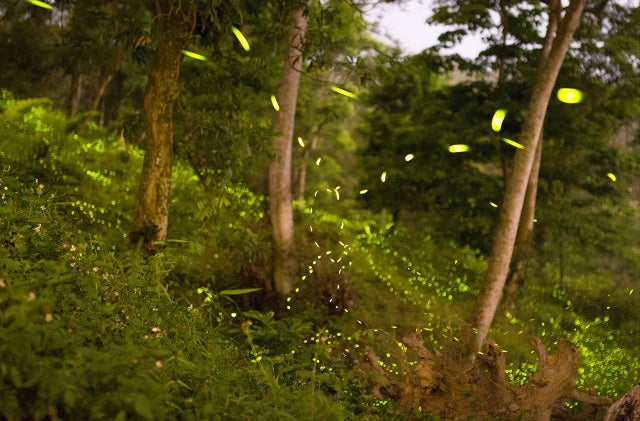 “In many places, fireflies seem to be dwindling,” says Sara Lewis. “The places where they thrive—open fields, forest edges, marshes—a lot of their habitat is disappearing.” Photo: Lin via Flickr
Another kind of firefly in North America has gone even farther toward the dark side. These Photuris fireflies are known as “femmes fatales” because they target the males of other firefly species. By cleverly mimicking the flash patterns normally given by females of the other species, they can lure a prey male close enough to reach out and grab him. By drinking his blood, these vampire fireflies gain not just nutrients, but also the prey’s toxins. So fireflies aren’t all sweetness and light.

You suggest an uncertain future for fireflies, as their populations are diminished by habitat loss, light pollution, drought, pesticides and other factors. What do we lose if there are no more fireflies?

Yes, in many places fireflies seem to be dwindling. The places where they thrive—open fields, forest 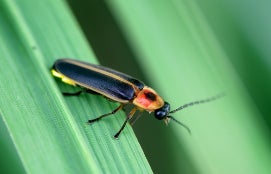 Many fireflies contain nasty tasting chemicals that deter birds and other insect-eaters. Photo: Depositphotos
edges, marshes—a lot of their habitat is disappearing. We don’t have hard data as we do, for example, for birds. We don’t have summer firefly counts—yet. Tufts has teamed with the Museum of Science’s Firefly Watch, which is working to collect that long-term data. That said, we do have a tremendous number of anecdotal reports about declining firefly populations.

On the brighter side, the book offers several easy suggestions for how people can make their own yards more firefly friendly, such as turning out the lights in them. On Twitter the other day, somebody said: ‘Oh the lights-out experiment is working—we now have many, many more fireflies at the back of the house.’ So, simple things like turning out the lights in the evening during the firefly season do make a difference.