Art Gallery on the Street

John Starosta Galante, A00, documents the political art along the sidewalks of Buenos Aires 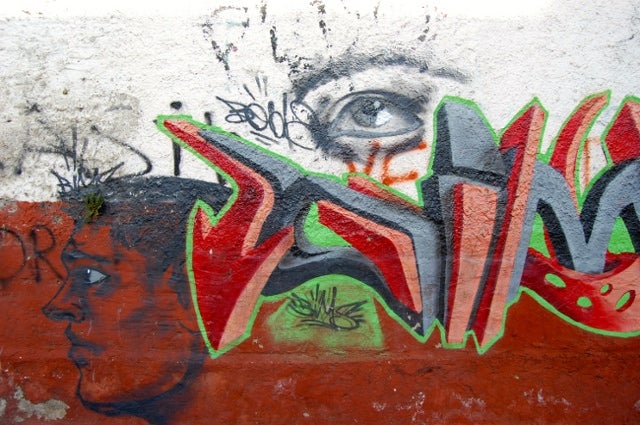 A single eyeball looming above layers of neon spray-painted graffiti looks down on passersby from a wall along a street in Buenos Aires. Along another wall, phantom fairies float over a doorway—and more graffiti. These concrete canvases are among the many photographed by John Starosta Galante, A00, during his travels around Argentina’s capital city. Now you can see those images and his street art photography in the exhibition Imagination’s Labyrinth, appearing at the Tufts Art Gallery’s Slater Concourse on the Medford/Somerville campus through Aug. 15.

Galante took the photographs between 2011 and 2013, while he was doing archival research in Buenos Aires for his Ph.D. dissertation in Latin American history. He’s happy to be exhibiting the photographs on campus, given his deep connections to Tufts: his brother, mother and grandfather are also graduates. Tufts Now spoke to him about his exhibition and what street art says about urban communities.

Tufts Now: You’re not a photographer by profession. How did this project come about?

John Starosta Galante: I spent a lot of time in Buenos Aires doing research on Italian immigration to the city. I’ve never considered myself a photographer, but as a researcher and formerly a journalist, I like learning about something and teaching people about what I’ve seen. I fell in love with these streets and the way the artwork reflects the city, and I became a photographer because of that. I went out with a camera strapped around my neck every Sunday, and probably took about 500 to 600 shots altogether. 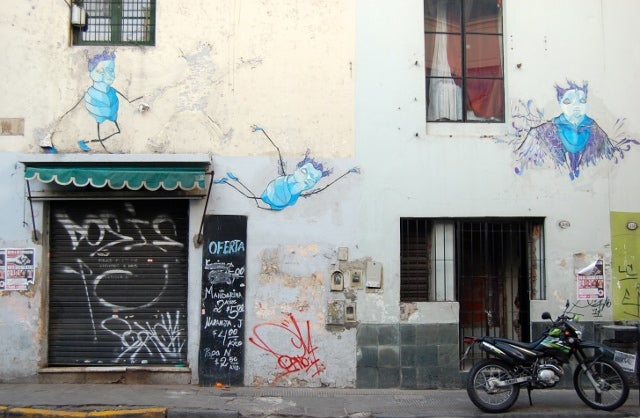 “The Furies,” by John Starosta Galante

What is it about Buenos Aires that inspired you?

Buenos Aires is a really compelling, multilayered metropolis with a profusion of street art, not just in terms of graffiti or tags, but in terms of their different modes of expression, like political messages or humor, or the way people use buildings as a backdrop for what they’re creating. There are opportunities to make these collages that are considered almost acceptable by the community. They’re not just painted over by the building owner the very next day.

So street art is not thought of as a criminal activity there?

It is and it isn’t. You see groups of people during the day creating. Of course it is illegal for them to do so, but it is amazing work, and you’re not going to call the cops on them. 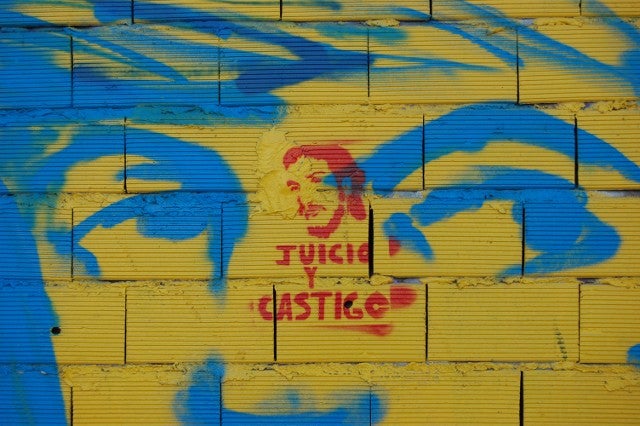 “El Pibe Blue,” by John Starosta Galante
As a historian, what would you say is the cultural significance of street art? What does it tell us about the past and the present?

In 2011, when I started, there was a national election. It was a very politicized atmosphere. A lot of the stencils had radical views, whether it was for the government or against, and I definitely saw a lot of the political issues in Argentine society come out. Eyeballs were a theme that emerged. They were generally menacing. It brought up the idea that the wall’s watching, that somebody’s lurking around the corner keeping an eye on what’s going on. That feeling of being threatened, of a looming danger, is something you feel in a lot of cities. There are also stencils that reference the ’70s and ’80s and the “Dirty War” military dictatorship of that time that give you a sense of historical memory.

You called the exhibition Imagination’s Labyrinth. What does that mean?

A megacity like Buenos Aires can be very labyrinthine. Buenos Aires is also very important in the poetry of Argentina’s Jorge Luis Borges. He used the image of the labyrinth to talk about the city and its characters.

These artists are using their imaginations to tell a story, to make someone laugh, say something poignant, or have someone remembered. People may not have access to an art gallery, but this is where they can express themselves.

The Slater Concourse, located in the Aidekman Arts Center, is a community gallery that is open to campus groups, alumni, faculty, staff and students. Gallery hours for Galante’s exhibition are Monday-Friday 8 a.m.-5 p.m. The deadline to submit a proposal for the 2017 spring semester exhibition is Oct. 31.