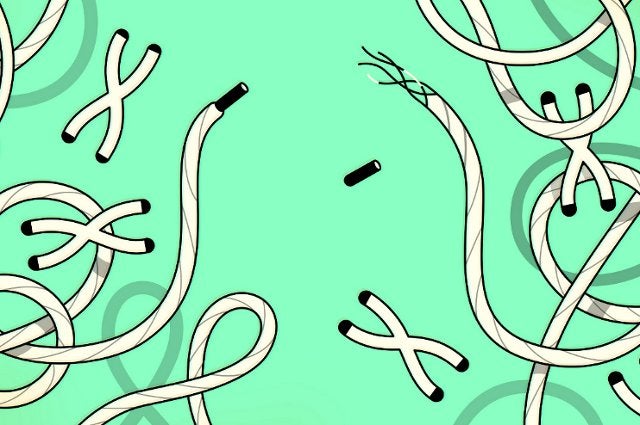 Ever notice what happens when the little plastic bit on the end of your shoelace comes off? The lace starts to fray and unravel, and soon it’s no good. It turns out your chromosomes have a similar protective cap known as telomeres.

They’re stretches of extraneous DNA on the end of chromosomes that keep the more important genetic information intact when cells divide. Each time a cell replicates, however, a bit of the telomere gets lopped off. Eventually, the telomere gets so short that the cell can stop dividing or die. Stress, illness and aging can speed up cell division, hastening the wear and tear on telomeres.

You can tell a lot about people from the state of their telomeres. In older people, those with healthier diets tend to have longer telomeres, while those with short telomeres are more likely to die from heart disease or infectious illness.

Scientists don’t know if telomere shortening is simply a sign of aging, or actually contributes to it. But there does seem to be a connection between telomere length and certain vitamins and minerals. Studies have shown that women who eat diets rich in vitamin A and beta-carotene, for example, tend to have longer telomeres.

Ligi Paul Pottenplackel, a scientist in the Vitamin Metabolism Laboratory at the Jean Mayer USDA Human Nutrition Research Center on Aging at Tufts, has been studying the connection between telomeres and folate, a B vitamin that is known to be important for keeping DNA intact.

In a 2009 study, she found that people with adequate folate in their blood had long telomeres. Does that mean more folate is better? More recently, she and her colleagues looked at telomere length and folate in about 1,000 men and women. Contrary to what the researchers expected, they found that the people with the highest levels of folate had shorter telomeres than those who were lower in folate. Why? It’s possible that people who get a lot of folic acid from multivitamins and fortified foods may be consuming more than they need.

The shorter telomeres, they write in the European Journal of Nutrition, could reflect DNA damage “resulting from folic acid intake beyond what is optimal for cellular functions.”

One thing that does seem to keep telomeres from eroding is physical activity. Researchers including Luisa Soares-Miranda at the University of Porto in Portugal and Dariush Mozaffarian, the dean of the Friedman School, investigated the connection in the journal Medicine & Science in Sports & Exercise. Using data from the Cardiovascular Health Study, they looked at 582 adults who were an average age of 73 at the start of the study. Over five years, the participants reported on their physical activity; the researchers also kept tabs on their physical fitness and telomere length.

At the start of the study, the participants who were more physically fit and who reported doing more walking had longer telomeres. Over time, everyone’s telomeres got shorter, but the participants who started exercising more saw a benefit. The more physical activity they added, the less their telomeres shrank. The authors conclude that even later in life, adding physical activity can improve your health outlook.

Tufts researchers will be looking more closely at telomeres to see what they can show us about healthy aging. In the meantime, may your diet be healthy, and your telomeres lengthy.