A Tango for One 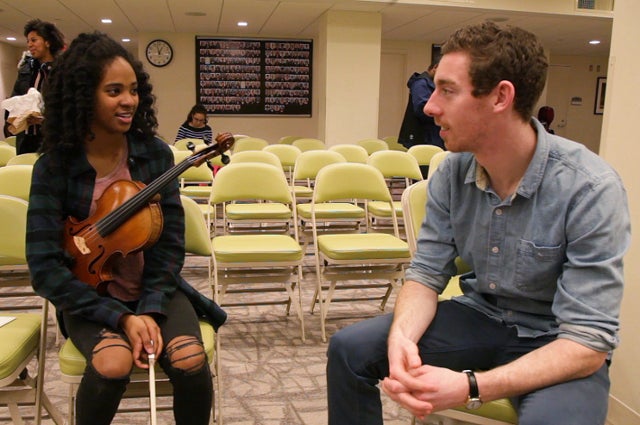 Ryan O’Connell, G16, has a question for Jehan Diaz, a talented 15-year-old viola player, as they sit together in a small room at Boston’s Symphony Hall: What has she enjoyed playing most with her school ensemble? Her reply is quick: tango composer Astor Piazzolla’s Libertango. Turns out, they both love it.

The two were matched in an unusual partnership between Tufts and Project STEP (String Training Education Program), an enrichment program that provides classical music training to talented middle and high school students from the Boston area. O’Connell, a graduate student in music composition, is one of four Tufts students who composed short pieces for Project STEP students this year.

“Do you prefer tonal or atonal music?” continues O’Connell. Diaz says she is comfortable with both, and that she likes music in a minor key. It’s useful information for the young composer—he will keep it all in mind as he writes the piece for Diaz to perform in the Symphony Hall classroom for parents and friends.

“This is an amazing opportunity for our composition students to get off campus and engage with a musical community they might not otherwise meet,” says Shawn Jaeger, a lecturer in composition at Tufts who led the partnership this past year. “Our student-composers learn how to develop a rapport with a collaborator they’ve never met before, and create a piece that is tailored to the technical capabilities and musical interests of the performer.”

Javier Caballero, artistic director of Project STEP, sees similar relevance for the young performers. The collaboration, he says, helps bolster the young students’ confidence in playing new music, which they often perceive as difficult and scary.

“They feel that they’ve earned a badge of courage,” he says. And in the future, if they’re offered the chance to work with a living composer, “they won’t fear it. They will say, ‘Yes, that piece will be something I can own.’ ”

Music professor John McDonald started the Tufts/Project STEP partnership in 2015, after being approached by Lois Shapiro, a member of the ensemble Triple Helix and a faculty member at Wellesley College; she imagined that pairing two sides of the music equation—young performers with aspiring composition students—could be a powerfully creative experience.

He needed no convincing. “I love doing things with students rather than saying, do this, do that,” says McDonald, who adds that the program will continue anew in spring 2017 under the direction of music lecturer Eun Young Lee. “This kind of encounter takes us composers outside of ourselves. You have to make adjustments—you move it up an octave, or you add substance by adding another note or strengthen by removal. You learn.”

Watch a video of scenes from the Tufts-Project STEP collaboration. Video: Caitlin Little, A16

A few weeks after that initial meeting last spring, O’Connell opens his laptop to show a reporter his composition in progress. Each composer’s piece is one to two minutes at most—“musical portraits,” as Jaeger calls them.

A trumpet player, O’Connell points in his composition to a slur, when notes are played without separation; he realized it was too long. “She’d make it to the end of her bow before she got to all these notes,” he says. “So she’s physically going to have a hard time doing that.” He made the necessary adjustment.

“In the beginning, I kept everything in this middle register and didn’t go up or down,” he adds. “Shawn noticed that and encouraged me to explore more—to consider single low notes with separate bowings instead of chords. In this new version, I go all the way down to this low A, and then two measures later, I’m up at a high C.” It’s that experimentation, O’Connell says—the small failures followed by little successes—that helps him overcome each hurdle in stride as he aims to stay true to the thread of the tones and the tango rhythm.

Music from the Heart

The collaboration between O’Connell and Diaz lasts less than two months, and the Project STEP students don’t have an abundance of time to practice. The “world premiere” of each new composition takes place on April 30, back in the same room where it all began at Symphony Hall. The performers are poised, and play their personalized short pieces with confidence.

O’Connell’s finished piece, aptly named Jehan’s Tango, is energetic, bold, surprising. The opening chord is an “attention grabber,” he says, and evolves into a “cool chord that sets an expectation for the rest of the harmonic content.” He based the piece on the general shape of Piazzolla’s Libertango more than on the tango rhythm itself. “I wanted to keep that feel, but I really like the idea of having a low note every downbeat,” he says.

He also paid attention to Diaz’s abilities as a young performer, and that gave rise to his own thoughts about what it means to make music. “Every time I write something for an instrument I haven’t had a lot of practice writing for, or in a style that I haven’t tried before, I can try out many different ideas,” he says. “When you share more complex knowledge with students, they understand and love the music more.”

Diaz received something she clearly treasures. “I keep the score in my music case and look at it every day,” she says. “It’s just such a nice feeling that someone composed something new, and they were thinking of me when they did it. It has my name on it and reflects something I enjoy. It’s a combination of everything that’s me.”