Tufts welcomes Class of 2020, most selective in university’s history 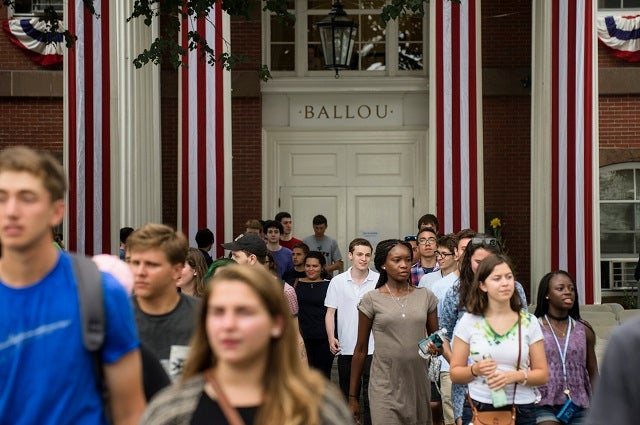 MEDFORD/SOMERVILLE, Mass. – (August 31, 2016) –Tufts University’s Class of 2020 boasts the title of most selective ever: only 14.3 percent of a record 20,223 applicants were admitted, placing Tufts among the most selective colleges and universities in the country. In another landmark, the incoming class includes the first students to enroll in the School of the Museum of Fine Arts (SMFA) at Tufts University, which officially became part of the School of Arts and Sciences on July 1.

The 1,342 first-year undergraduates are a dynamic and diverse group, representing 46 countries ranging from Bahrain to Zimbabwe, 45 states, the District of Columbia, and Puerto Rico.  In addition, 55 students will pursue Bachelor of Fine Arts degrees through SMFA at Tufts. Closer to home, 27 students come from Tufts’ host communities of Medford, Somerville and Boston.

Incoming students also include the first group of 1+4 Fellows who returned this spring from Brazil, Nicaragua and Spain as part of the Jonathan M. Tisch College of Civic Life’s bridge-year program that provides accepted students the opportunity to learn from a year of full-time community service before beginning their academic studies at Tufts.

Twenty-nine percent of domestic students in the incoming class are of color, up from 28 percent last year; 4.9 percent identify as Black, 5.2 percent as two or more races, 6.6 percent as Hispanic, and 12.4 percent as Asian. Meanwhile, 132 students are from the first generation of their families to attend a four-year college and 130 students are Pell Grant recipients.

“With this class, we have been able to increase our selectivity and diversity while attracting exceptional students who will flourish in the Tufts environment,” said Karen Richardson, dean of admissions and enrollment management.

The students include an inventor who, responding to a number of car-related deaths in her hometown, developed an app to test drivers’ fitness to get behind the wheel; a soccer captain and two-time high school class president who wants to use investment banking to rebuild the New Orleans public school system; and a student who has published two research papers in the Journal of Child Neurology.

The class posted impressive mean SAT scores of 713 in critical reading and 729 in math. Its ranks include 54 National Merit Scholars.

The university awarded $19.3 million in institutional grants, all of it need-based, with an average grant of $41,419. Thirty-five percent of the incoming class receives financial aid.

The percentage of students accepting an offer of admission rose to 46.5percent, marking the eighth consecutive year in which yield has increased.

The matriculation ceremony took place on the academic quad between Bendetson and Ballou halls on the Medford/Somerville campus.