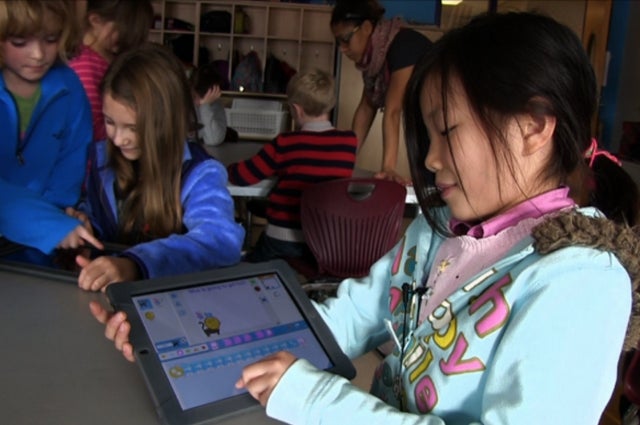 Five-year-old Ellie wants to make her cat a different color. She’s got a firm grip on an iPad as a teacher at Eliot-Pearson Children’s School watches to see what she’ll do next.

Pulling up the paint editor for the app ScratchJr, she quickly transforms a cat from orange to red. “Red’s my favorite color—and blue,” she says.

“You could make a blue background,” suggests the teacher, prompting Ellie to pull up a vast palate of possible backgrounds. “Ooooh! Outer space!” she exclaims. “Wait! Is that a desert?” She bends over the iPad, examines her options and settles on a landscape of snow and ice, all blue and white. She inserts her fire-engine red cat into it.

Over the next half hour Ellie builds the basics of a story by snapping together a row of colorful blocks, from left to right. She populates her Arctic landscape with a polar bear (red) and a daisy (also red). She makes the cat jump up and the polar bear talk, creating a text bubble and using her own voice to speak the words in it. “Hi cat!” the bear says. She’s giggling and happy: it works.

Ellie wasn’t just building a story—she was programming it, using the basic skills of coding. That’s the goal of ScratchJr, a free educational app that Marina Umaschi Bers, a professor in the Eliot-Pearson Department of Child Study and Human Development, co-created with the MIT Media Lab. Since its debut in August 2014, ScratchJr has had more than 3 million downloads. In December, PBS launched PBS KIDS ScratchJr, giving children the ability to animate PBS characters at home. And in April, ScratchJr reached a new milestone with the release of a Spanish version of the app.

To accompany that release, The Official ScratchJr Book: Help Your Kids Learn to Code was also translated into Spanish. Bers traveled to her native Argentina for the translation’s rollout at the Feria International del Libro, an international book fair.

“We’re excited about how well it has been received,” says Bers, head of Tufts’ DevTech Research Group, which seeks to understand how new technologies can aid children’s development and learning. “The book is versatile and visual, so that children as young as 4 or 5 can use it. But the biggest benefit is for teachers and parents. By translating all our curriculum resources, we’ve made it easier for them to support children; they can now follow a lesson that was previously only available in English.”

Bers says that a publisher asked Tufts to translate the book and app, and that it made sense to accept. After all, Spanish is the second most spoken language in the United States. The Spanish app and book “aligned with our aim to see that ScratchJr continues to get into the hands of kids around the world,” Bers says.

Bers and her Tufts group are focusing on educational approaches that integrate technology with learning. In addition to ScratchJr, they have developed KIBO, a robotics construction set for children pre-K through second grade that doesn’t require a screen or tablet—it’s made of interlocking wooden blocks. Last fall Tufts also began a new graduate certificate program in early childhood technology.

Bers notes the prevalence of programmed and “smart” objects around us every day, and says how important it is for young people to know about them. “When you go to wash your hands in the sink, and you put your hands under the faucet, water comes out. There is a sensor there,” she says. “Someone has programmed that sensor. We need to be able to understand how this human-made world is working, and we are not going to understand it by reading, but by doing. We need more and more developmentally appropriate tools out there to be able to learn the way young children learn.”

Should Kids Be Cramming for Tests or Competing at Sports?