Process could pave way for engineering innervated tissues such as skin, cornea 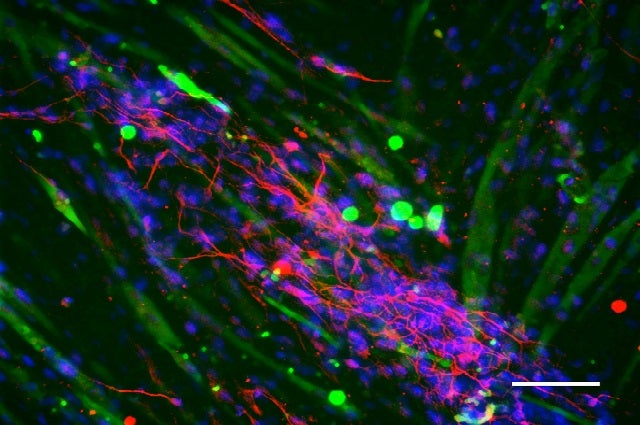 MEDFORD/SOMERVILLE, Mass. (September 13, 2016) --Tufts University researchers have discovered a new technique for generating rapidly-differentiating human neural stem cells for use in a variety of tissue engineering applications, including a three-dimensional model of the human brain, according to a paper published today in Stem Cell Reports. The work could pave the way for experiments that engineer other innervated tissues, such as the skin and cornea, and for the development of human brain models with diseases such as Alzheimer’s or Parkinson’s.

Researchers converted human fibroblasts and adipose-derived stem cells into stable, human induced neural stem cell (hiNSC) lines that acquire the features of active neurons within as few as four days, compared to the typical four weeks, according to the paper. The neural stem cells are hardy, can be frozen, passaged indefinitely, and have unique attributes that allow them to grow well in vitro with other cell types, such as skeletal muscle. When injected into an early stage chicken embryo, the hiNSCs incorporated into the brain as well as the neurons of the peripheral nervous system that innervate tissues in a developing limb.

The researchers are not the first to generate hiNSCs but their process appears to be simpler, faster, and more reliable than existing protocols, according to the paper.

“This discovery could help reduce a significant barrier to progress in biological and in vitro studies of the human nervous system,” said corresponding author David L. Kaplan, Ph.D., Stern Family Professor in the Department of Biomedical Engineering at Tufts School of Engineering. “Initial results suggest that hiNSCs are useful for future biomedical applications such as high-throughput drug assays, complex innervated co-cultures, and three dimensional models using normal and diseased cells.” Kaplan is also a member of the Cell, Molecular & Developmental Biology graduate program faculty at the Sackler School of Graduate Biomedical Sciences at Tufts.

The work builds on Kaplan’s previous tissue engineering research. In 2014, a team of researchers led by Kaplan unveiled the first reported complex three-dimensional model made of brain-like cortical tissue that exhibited biochemical and electrophysiological responses and could function in the laboratory for months. The model used cortical neurons, derived from rats, grown over a stiffer porous scaffold made of cast silk protein.

The most recent discovery enabled the researchers to create a working three-dimensional model of the human brain using neurons derived from human cells grown over the same silk and collagen protein scaffold. By imaging those networks, the researchers also were able to see neurons firing back and forth, demonstrating their functionality.

The ability to generate cells more quickly could permit the development of larger and more sustainable three dimensional models, said Dana M. Cairns, a post-doctoral researcher in the Department of Biomedical Engineering at Tufts University and first author on the paper.

“The cells’ rapid differentiation speeds discovery in the lab,” she said. “For example, other emerging brain models often require months of growth before the model gets to a stage where you can consider it brain-like tissue. By contrast, after a few weeks in these scaffolds, they’ve already developed neural networks.”

About Tufts University’s School of Engineering

Located on Tufts' Medford/Somerville campus, the School of Engineering offers a rigorous engineering education in a unique environment that blends the intellectual and technological resources of a world-class research university with the strengths of a top-ranked liberal arts college. Close partnerships with Tufts' excellent undergraduate, graduate and professional schools, coupled with a long tradition of collaboration, provide a strong platform for interdisciplinary education and scholarship. The School of Engineering’s mission is to educate engineers committed to the innovative and ethical application of science and technology in addressing the most pressing societal needs, to develop and nurture twenty-first century leadership qualities in its students, faculty, and alumni, and to create and disseminate transformational new knowledge and technologies that further the well-being and sustainability of society in such cross-cutting areas as human health, environmental sustainability, alternative energy, and the human-technology interface.