Incoming students bond thanks to the Tufts Wilderness Orientation program 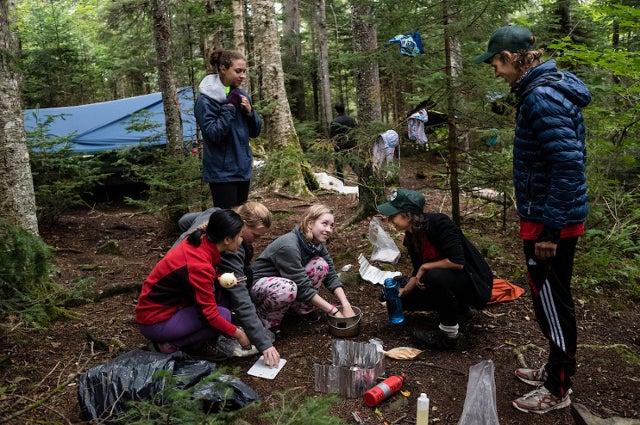 Perched atop a wooden platform littered with jackets and water bottles, Connor Hager fishes a slip of white paper from a big glass bowl. Hager, a first-year undergraduate from New Hampshire, reads the clue for this game of “salad bowl”: “We put it in water so we can drink it.”

“Iodine,” reply two others sitting in a circle around him at a campsite by Sabbath Day Pond in Maine, about four hours north of Boston.

It’s the fourth night out in the woods for seven Tufts freshmen and their two upperclassmen leaders. They’re taking part in the Tufts Wilderness Orientation’s five-day intermediate-level backpacking trip for incoming undergraduates. Other Tufts Wilderness Orientation groups went canoeing and backpacking and did trail cleanup at sites in Maine, New Hampshire and Vermont in late August—all part of a larger pre-orientation program for incoming freshmen and transfer students each year. The goal: help them make friends and get a head start on the transition to college life. This year more than half of the 1,342 incoming undergrads participated in a pre-orientation program.

“We use the outdoors to foster a sense of community and help incoming students adapt to a new environment,” says Benjamin Skach, a junior political science major and one of the group leaders. “It helps you move on to the next phase of life and have a great time before college starts.” 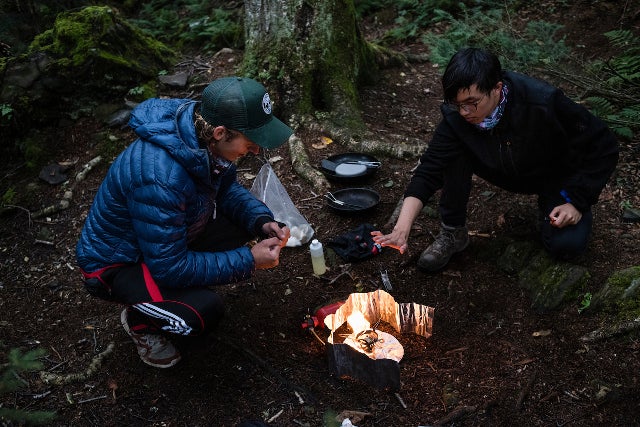 Group leader Benjamin Skach and Leland Wu light a cooking fire for their evening stay at Sabbath Day Pond. Photo: Alonso Nichols
Colorful bikinis and swim trunks are slung in a tree nearby, drying from the dip-and-wade the group took to wash off the day’s 4.5-mile hike from Little Swift River Pond. Now clad in hiking boots and fleeces—it’s cooled off—the group sits in front of the tarp they’ve tied over the platform. They wind down with a spicy snack mix of nuts, seeds and crackers and a game of salad bowl. Teams compete to guess phrases the group has written, ranging from the simple (“cookie butter,” which the group has been eating since the peanut butter started running low) to the gleefully bizarre (“velociraptors trying to take over a birthday party”).

The other group leader, Benya Kraus, a junior international relations major, announces that it’s time to make dinner before it gets dark. Tonight’s entrée is pizza. “Where’s my cutting crew?” she asks. “Who wants the really fun part of kneading the dough?”

Hager slices up mozzarella on a cutting board balanced on his knee. Others chop vegetables and fetch water from the lake. The chill of the night is getting to Gerui “Gray” Wang, A20, who’s outfitted for onion-chopping duty in purple leggings and a red fleece. “I’m shivering in my teeth,” says Wang, a native of Beijing who’s thinking about majoring in applied math and economics.

Skach sets a small camp stove on a piece of foil, surrounds it with a foil wall, and shows the campers how to pump a red fuel canister to light the stove. Before long, the smell of sizzling onions and black pepper fills the air.

This night’s dinner is way more routine than the one the previous night, when a torrential downpour blew in just as they had finished eating. As the campers hurried to wash their dishes in the pond, they saw a flash of lightning. Kraus and Skach secured the tarp, and everyone darted underneath to hunker down for the night.

“Everything went so wrong,” Kraus says. Listening to the thunder and the rain on the tarp, “I was thinking, oh my God, this could be such a miserable experience if we had not had this family,” she says. And that’s what the campers quickly became: family.

Three years ago, as she headed into her own first year at Tufts, Kraus says she remembers being afraid to trust people. Her wilder family, as the campers are known, “was everything I needed. Suddenly I knew I wasn’t alone,” says Kraus, who still lives with friends she made on that trip. She says she signed up to be a leader because “I wanted to pay that back.”

She’s definitely done that, Wang says. “Our wilder parents care about us like real parents do. My parents aren’t here, but I feel that I’m in a family, being cared about.”

The group breaks up. Tonight will be an early one—they have to hike nearly four miles in the morning to meet a 9 a.m. bus that will take them back to the Medford/Somerville campus.

“I hoped to make at least one friend,” says Hager. “Instead I made a family.”