Tufts football gets off to a bright start playing the first-ever night game on Sept. 24 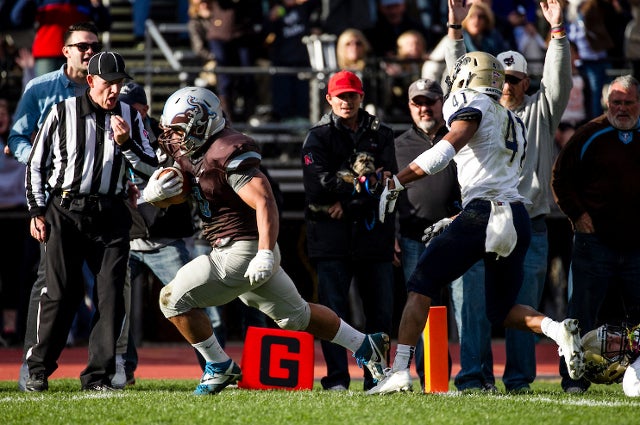 The Jumbos open the 2016 football season by playing the first home night game in school history against the Wesleyan University Cardinals at Ellis Oval-Zimman Field on Saturday, Sept. 24, at 6 p.m.

Portable lights—courtesy of the Friends of Tufts Football—will be trucked in for what will be only the second night game in the history of New England Small College Athletic Conference (NESCAC) football. The two teams played in the first one, on the Wesleyan campus in Middletown, Connecticut, on Sept. 21, 2013.

The Jumbos went 6-2 last season, finishing second in NESCAC. Last season’s seven All-Conference selections for the Jumbos were the most in seven years, and five of them are returning players. Senior running back Chance Brady, the NESCAC Offensive Player of the Year in 2015, rushed for 975 yards last fall—nearly 300 more than anyone else in the league. The Jumbo defense returns with both the league’s top sack man (Zach Thomas, 9.5 in 2015) and interceptions leader (Tim Preston, 6). The senior class is big—21 players on the preseason roster—and motivated.

“Many of our seniors have been playing since they were freshmen, and the entire class has worked hard to help us improve during their careers,” says head coach Jay Civetti. “I feel confident that behind their leadership, we are going to do the necessary things it takes to be successful.”

The passing attack will be led by 6-foot-6-inch senior quarterback Alex Snyder. He put together one of the top passing years in team history last fall, with 1,435 yards and 10 touchdowns. He starts the season 288 yards shy of becoming the fifth Tufts signal-caller to pass for 3,000 yards in a career.

Senior receivers Mike Rando (36 receptions, 339 yards and 2 touchdowns in 2015) and Ben Berey (15-209-2) are a pair of reliable targets. The Jumbos have rising depth at receiver, with juniors Joe Nault, Mike Miller and Joe Byrnes and sophomore Jack Dolan. Senior tight end Nik Dean has shown big-play capability in his career.

“We made great strides as an offense last season, so with another year of experience, we could be even better this year,” Civetti says.

“Our strength is in our resilience and our depth,” says Chance Brady. “Our boys have got a ton of grit, and we’re ready to show it.”

Defensively, Tufts led the league in sacks last year with 24 and ranked third, allowing 112.8 rushing yards per game. In addition to Thomas and Preston, senior tri-captain Mike Stearns returns as one of the top tacklers in NESCAC. He set the Tufts record with 60 solo stops as a sophomore in 2014.

“We look to stop the run and had some success with that last season,” Civetti says. “With a lot of talent and experience on the defensive side as well, we expect to be even better overall this year.”

Sports Information Director Paul Sweeney can be reached at paul.sweeney@tufts.edu.