From Poverty to Prison 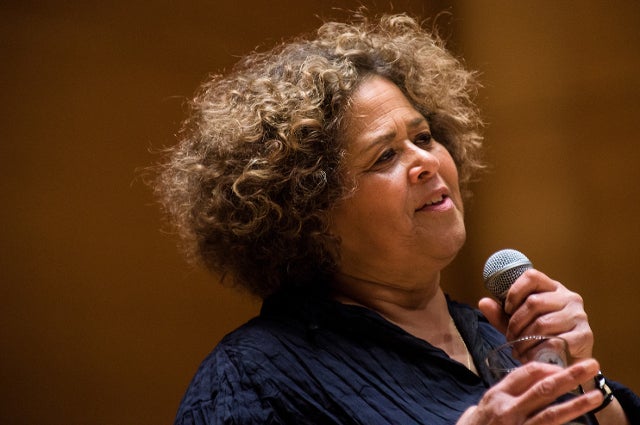 From the stage of Distler Auditorium at Tufts, actress and playwright Anna Deavere Smith issued a call to action: “What I say to young people right now is, this is it, this is your moment.” Pausing, she extended her hand toward the audience, an action that drew their complete attention.

“There’s a lot of heaviness and pain in this country,” she continued. “As heavy as it seems, in this moment is a place where change can happen.”

The plea came from her lips, but the words belong to Sherrilyn Ifill, president and director-counsel of the NAACP Legal Defense Fund and one of the many people she portrays in her one-woman show Notes from the Field: Doing Time in Education. Smith performed a modified version of the play, which had just ended a run at Cambridge’s American Repertory Theater, to a packed house at Tufts on Sept. 21.

Notes from the Field examines the “school-to-prison pipeline”—words used to describe the funneling of children from public schools into the juvenile and criminal justice systems. Smith’s show, and the question-and-answer session that followed, was the first in this year’s Distinguished Speaker Series at Tisch College, which recognized her with a civic leadership award back in 2005.

Smith’s film and TV credits include Philadelphia, Black-ish, Nurse Jackie and The West Wing. But she is perhaps best known for her groundbreaking documentary-style portrait performances, in which she explores issues of race and social justice by interviewing those who are affected and then becoming those characters on stage.

She asked the teachers in the Tufts audience to clap so she could acknowledge them. “After 250 interviews, I feel that it is incorrect to call this the school-to-prison pipeline, and unfair to blame teachers,” she said.

“The problem is poverty, and schools are inside the ecology of poverty. Without extreme innovation, we cannot expect teachers to intervene in environments where there’s chronic violence and sales of drugs and several generations of traumatized young people.”

Her previous works Fires in the Mirror and Twilight: Los Angeles, 1992 examined the Crown Heights and Rodney King riots, while Let Me Down Easy deconstructed the health-care debate.

At Tufts, Smith totally transformed into each character, giving her voice and body over to the inflections and mannerisms of her subjects. Among them were a fisherman now residing on the Yurok Reservation in northern California who was the first of his friends to go prison; a high school principal from Philadelphia on a personal mission to save at least one child from the system; and 19-year-old Alan Bullock, who was arrested for smashing a police car windshield following the death of Freddie Gray, the 25-year-old African-American who was arrested by Baltimore police in 2015 and died from injuries he sustained while in custody.

Smith’s performance was not intended to offer quick solutions to the growing numbers of poor people who end up in prison. Instead, her stories seek to offer hope and inspire audiences to imagine a future for all children that does not include incarceration.

“Hope looks at the evidence and says it doesn’t look good at all,” she said. “Hope takes a leap of faith to go beyond the evidence to create new possibilities based on visions that become contagious.”