Tisch College Summer Fellows work in the nonprofit and government sectors, finding out about careers they might like to pursue 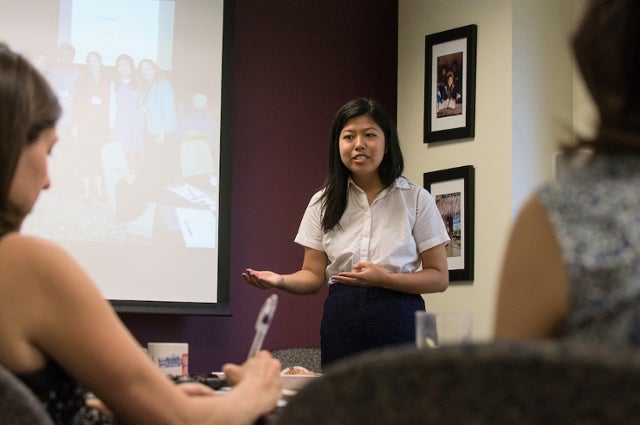 Dressed in a crisp white shirt and navy skirt, Jennifer Yu, A18, presents her findings from a nine-week research project about barriers to opportunity for women in Asia. Her audience: a dozen staffers from the Asia Foundation, a nonprofit international development agency.

It’s a big stage for a college junior. Yu continues her presentation: “In Cambodia, 32.8 percent of women and 20 percent of men agreed there are times a woman deserves to be beaten. Approaching the issue of violence against women, it’s important to engage both genders.”

Yu was one of 83 Tufts students selected for this year’s Tisch Summer Fellows program. They work full-time for 10 weeks doing jobs with a focus on public interest in a range of government offices, nonprofits and advocacy organizations in and around Washington, D.C., New York and Boston and receive a stipend of approximately $4,000. Students can also pursue international projects, working on issues related to health, education and the environment in places such as Ghana and Malaysia.

The demand for these kinds of real-life experiences working for the public good is increasing as more students look for ways to road test potential careers and expand their skill sets. The Tisch Summer Fellows program—which supported 83 fellows in 2016, up from 46 in 2015—is growing, but landing one of these highly coveted summer work experiences has become increasingly competitive. The stipends are funded by alumni and others, and the Tisch College of Civic Life at Tufts also relies on them to identify sites for summer placements.

“Our goals are for students to consider their own civic identity, connect their coursework to real-world experience, and understand communities different from their own, all while exploring potential career paths,” says Maggie McMorrow, a program coordinator associate at Tisch College. “Whether they were on Capitol Hill, at the Pentagon, in the Massachusetts State House or at community nonprofits, our fellows were learning while making a difference.”

An international relations major who’s concentrating her studies on East Asia, Jennifer Yu felt far from home during her first few weeks at the Asia Foundation headquarters in Washington, D.C. A self-described “dutiful daughter,” Yu has built her studies around her strong sense of loyalty to her heritage and family. “I’ve always been really interested in learning more about my parents’ history and culture,” she says. They moved to the U.S. from China to give their children an education and standard of living they never had themselves. Yu was drawn to the Asia Foundation’s mission to increase economic opportunities and promote rights for women.

She worked furiously to familiarize herself with Southeast Asian countries she’d never studied and gender analysis terms she’d never learned. She attended events about gender, international development and Asia, including one at the Japanese ambassador’s home, and heard from experts from the foundation’s 18 offices around Asia.

She found a mentor in Elizabeth Silva, program officer for the foundation’s Women’s Empowerment Program. Now fluent in the language of gender analysis, Yu is considering adding that to her studies at Tufts. “Elizabeth has shown me gender can be not just what you advocate for, but a part of your career,” she says.

The Drive to Learn More 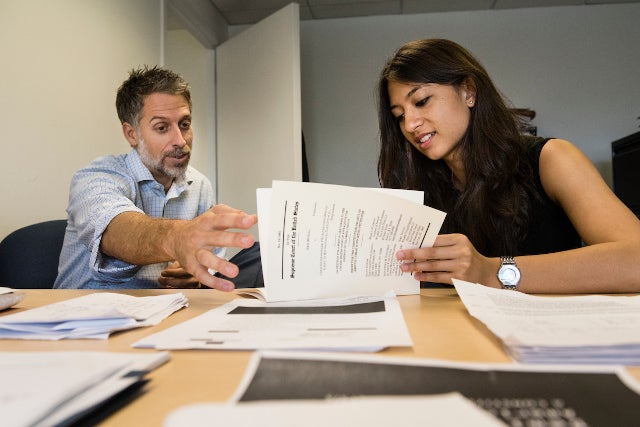 “We try to make sure the fellows get some exposure to various aspects of what it’s like to be a policy advocate,” says Scott Roehm, A99, vice president of programs and policy and Benya Kraus’s supervisor at the Constitution Project, a D.C.-based nonprofit think tank. “And we can count on them giving us a work product that’s well-researched, solid and on-point.” Photo: Alonso Nichols
Sitting at her workstation in the offices of the Constitution Project, a D.C.-based nonprofit think tank, Benya Kraus, A18, gestures at the thick books on law and politics lining a long shelf. “I’m trying to read as many of them as I can before I go,” she says.

Kraus, also an international relations major, is the diversity and community affairs officer on the Tufts student senate, leads Tufts Wilderness Orientation trips, coordinates statewide legislative lobbying for Amnesty International, and is working on a proposal to establish an indigenous studies minor. In second grade, she made business cards identifying herself as a writer, actress and women’s rights activist. “I’ve struggled with how vast my interests can be,” she says.

That drive to learn more was one reason Kraus joined the Constitution Project, which works for bipartisan consensus on issues related to the balance between public safety and individual rights, the First Amendment, and transparency in government.

This summer, as she did research for a report on demilitarizing police departments and reviewed the think tank’s clemency recommendations related to the death penalty in Oklahoma, Kraus felt frustrated. “I get attached to our recommendations, and just want to see them through to the end,” she says.

That changed after she met with American University law professor Stephen Wermiel, A72, A10P, through the Tisch College network Connecting Alumni Student Experiences. He helped her realize she doesn’t have to know everything right away. “I got to hear about the junctures in his life where his path started changing, and what a career looks like,” Kraus says.

Kraus is doing a lot of thinking about her career trajectory. “I want to be able to do things that genuinely help communities and bridge gaps,” she says. “And I’d like to find a way to bring foreign policy, local and national work, government, and law all together.”

A Summer at the Pentagon 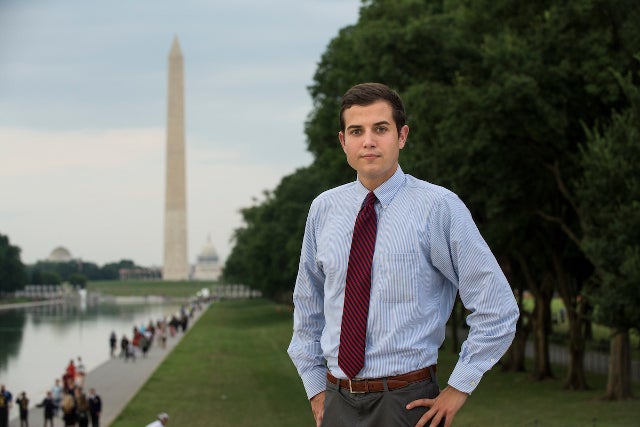 “I’ve always kind of dreamt of being exposed to this,” says Josh Golding. Photo: Alonso Nichols
“You have to turn your phone off. It’s a security thing.” Josh Golding, A17, apologizes to this reporter as he enters a corridor in the Pentagon, where he is the Russian Threat Assessment Fellow for the Department of Defense.

Golding, an international relations major with a concentration in security studies, found that his summer internship at the Office of the Secretary of Defense in the Cost Assessment Evaluation (CAPE) program dovetailed nicely with his classroom studies—he interviewed military officers and Department of Defense analysts as part of project to develop Pentagon spending priorities.

His desk is strewn with reports with titles such as “Reinforcing Deterrence on NATO’s Eastern Flank.” The military focus comes naturally for Golding, who remembers watching reruns of the TV series Black Sheep Squadron, about a World War II squadron, with his grandfather, who was an Army combat engineer in the war. By the end of elementary school, he was reading books from his grandfather’s library like Guests of the Ayatollah: The First Battle in America’s War with Militant Islam.

“Being able to sit down and talk to the people who make decisions, seeing recommendations being made at a pretty high level, and realizing I’ve reached the same ones myself is a good feeling,” Golding says. His earnest demeanor cracks just a bit as he describes his hallway encounter with Secretary of Defense Ash Carter. “I’ve always kind of dreamt of being exposed to this,” he says, grinning. 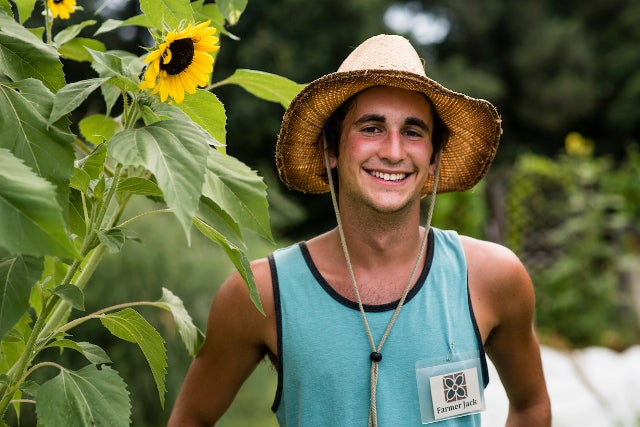 “I got an in-depth look at the food system in D.C., what shapes it and the challenges it faces,” says Jack Colelli. Photo: Alonso Nichols
While many Tisch Summer Fellows work in offices, Jack Colelli, A18, found himself on a farm outside of Alexandria, Virginia, interning at Arcadia Center for Sustainable Food and Agriculture. He did everything from harvesting crops to teaching schoolchildren about the farming life.

“I wanted on-the-ground experience, working at a nonprofit especially, because there’s so much going on at all times,” says Colelli, a Vermont native who was looking to learn more about what he could do with his majors in quantitative economics and food systems.

Planting and harvesting crops such as Swiss chard, tomatoes, cucumbers, okra and garlic, Colelli says, “I saw so many aspects [about] the vertical integration of growing on a big farm. I got an in-depth look at the food system in D.C., what shapes it and the challenges it faces.”

On one of his first days at the Arcadia Center’s Farm Camp for kids ages 6 to 11, Colelli faced an overgrown plot that had to be cleared in two days—not a huge challenge for someone who started his own garden in fifth grade and later built a hydroponic greenhouse. But how do you convince a dozen 10-year-olds to weed?

He dangled a carrot: If they weeded, they could plant vegetables—and then eat them. It worked. Now he’s considering a career at the USDA Foreign Agricultural Service.

At the end of his farming stint, Colelli joined the other D.C. Tisch Summer Fellows for a visit to the White House. “I was wearing this under my suit,” he smiles, pointing at his sweat-soaked tank top and cargo shorts. “I was Farmer Jack on the inside.”