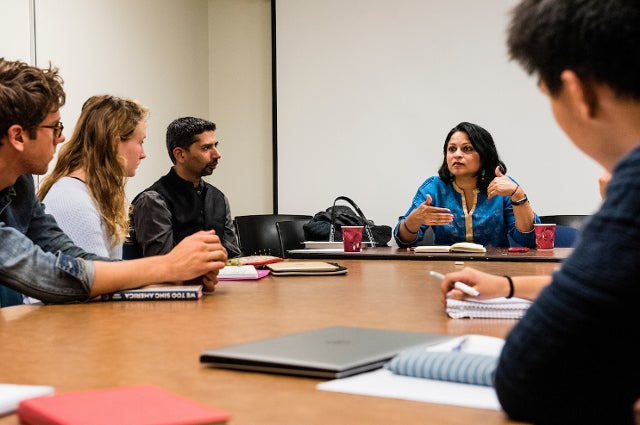 In the aftermath of the Sept. 11 attacks, America experienced a wave of violence against Asian-Americans as xenophobia and anti-Muslim sentiment became prevalent. Deepa Iyer, then a lawyer for the Department of Justice, saw it firsthand, and wanted others to understand the hurt such actions caused.

She spoke at Tufts on Oct. 5 to promote a dialogue about those experiences, which she recounts in her book We Too Sing America: South Asian, Arab, Muslim and Sikh Immigrants Shape Our Multiracial Future (The New Press, 2015), along with other incidents of discrimination. “At the end of the day,” she said, “the message is, it’s not your country, and that’s a message our communities have been dealing with since 9/11.”

As examples, Iyer pointed to workplace discrimination against women who cover their heads and hate crimes such as the 2012 shooting at a Sikh temple in Oak Creek, Wisconsin, that killed six people. She talked about the profiling of airline passengers—“flying while brown”—and systemic issues such as government surveillance of mosques and Muslim student associations. 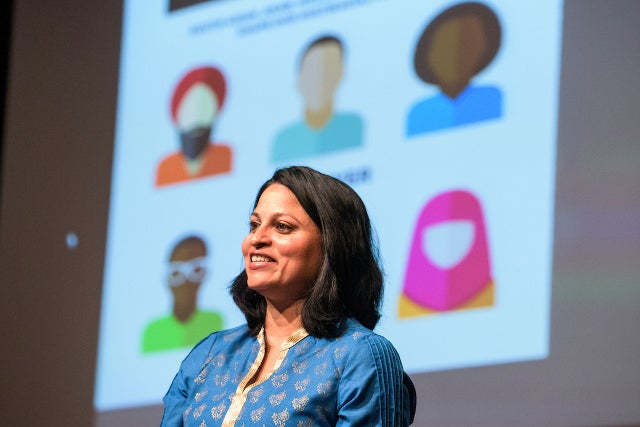 “We are at a tipping point right now—politically, demographically, legally and socially,” Deepa Iyer said. “How we navigate that will shape the country for generations to come. So we have to act with some level of urgency to address the situations communities of color are facing.” Photo: Alonso Nichols
She implored the largely Asian-American student audience at Cohen Auditorium to get involved and foster dialogue about these issues. “I’m asking you to move from being spectators and bystanders to being disrupters and upstanders,” she said. “We need to have messy conversations about race on the individual level with our families, on campuses and in places of worship.”

In the aftermath of 9/11, Iyer, who, at age 12, immigrated with her family from Kerala, India, to Kentucky, thought about how she could serve her community in a time of crisis. A civil and immigration rights lawyer, she became executive director of South Asian Americans Leading Together, where she worked for a decade to advance policies on issues such as racial profiling and immigration reform. She is now a senior fellow at the Center for Social Inclusion, a national organization that seeks to thwart structural racism.

One of her goals in writing the book, she said, was to document the living history of South Asians, Arabs, Muslims and Sikhs in America. Iyer, an adjunct professor at the University of Maryland, said she realized her students have had a “sanitized understanding” of what it has meant to belong to those communities since 2001.

The path to building equitable, inclusive and welcoming campuses and communities lies in forming coalitions, she said. That means moving away from identifying with specific cultures to identifying with a shared history of oppression and creating solidarity among communities of color. One way to change the narrative, she said, is to reject seemingly positive, but ultimately harmful tropes like the model minority myth, which ignores marginalized members of Asian-American communities and encourages racial hierarchy.

“We are at a tipping point right now—politically, demographically, legally and socially,” Iyer said. “How we navigate that  will shape the country for generations to come. So we have to act with some level of urgency to address the situations communities of color are facing.”