A Faith in Humanity

Walker Bristol, A14, espouses concern and compassion as the first humanist-in-residence in the University Chaplaincy 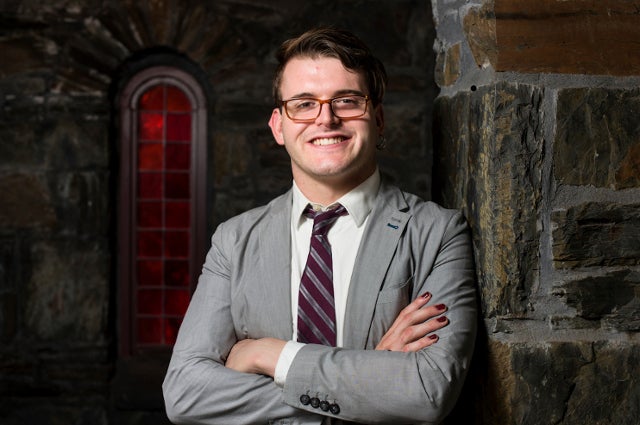 The start of a new school year reminds Walker Bristol, A14, about how he felt his first day at Tufts.

As a freshman from Wilmington, North Carolina, he saw a chance to change direction. In high school he had been drawn to the energy of an evangelical church, but then drifted away, conflicted by some beliefs that didn’t jibe with his moral values. He often felt isolated as he explored his identity and searched for meaning in his life—without religion.

When he walked into his residence hall six years ago, “I felt like I had a whole new story to write,” he says. “I thought, now no one is telling my story for me. I’m a totally new person.”

He found inspiring friends through the Tufts Freethought Society and intellectual depth with his double major in religion and philosophy. He also rekindled the Quaker faith of his childhood, interpreting it through the lens of secular humanism, something he later blogged about on the Huffington Post.

“The most important component for humanists is often that we look to one another for support and devote our lives to each other, with or without a devotion to something greater than ourselves,” he says. It’s a belief, he goes on to say, in which values based on experience, reason and dialogue support concern, love and compassion for all humans.

The narrative of Bristol’s story continues to grow in his position as Tufts’ humanist-in-residence in the University Chaplaincy, the first such university-funded position in the country. Initially a two-year pilot program, the residency has flourished under Bristol’s stewardship and is now a permanent, nearly half-time position.

“It’s exciting to see how the program is changing, how the people who connect with me change,” says Bristol, who is also a graduate student at Harvard Divinity School. “What is most rewarding is to be able to work with the other chaplains—we are collectively building interfaith connections. We support each other.”

University Chaplain Greg McGonigle says Bristol is committed to giving humanism a home at Tufts. “He’s deeply passionate, inquisitive, caring and conscientious—and he had the spirit you look for in someone charged with doing something new,” he says. “He’s a pioneer who really wants to be of service to the community.”

The humanist position, McGonigle says, is a “great fit” for Tufts, because the interfaith chaplaincy also includes chaplains who serve Catholic, Protestant, Muslim, Jewish and Buddhist students, faculty and staff, building on a legacy rooted in Tufts’ Universalist origins.

“It makes perfect sense that Tufts would be at the forefront of adding a humanist chaplain, because our founders, the Universalists, were always seeing connections across the human experience,” McGonigle says. “Our religious heritage is inclusive—it was never about exclusion. When people see our chaplaincy team, I think they can see the Universalist spirit is alive as we continue to support all members of this community.”

The Core of Humanism

In addition to providing one-on-one pastoral care, Bristol has brought visibility to humanism at university events. He gave the benediction at this year’s matriculation ceremony for undergraduates and participated in the memorial ceremony at the medical school’s anatomy lab, an annual event when the students thank the families of the anatomical donors who have taught them so much. He initiated regular visits to Cummings School of Veterinary Medicine to support students who console grieving animal owners who call the pet loss support hotline.

To get the word out about the humanist community to incoming students, he writes welcome letters each fall to the approximately 600 undergraduates who indicate on the freshman survey that they are “nonreligious” (about 10 to 20 typically identify as secular humanist).

“At first I expected to meet with students who were leaving organized religion—they were exploring the option,” he says. “But instead, I see a lot of students who are exploring different intersecting parts of their beliefs—race, culture, what they want to major in—and religion can play into those questions.”

Bristol also leads small group reflection sessions. Those gatherings aim to “foster a comfortable environment for people to engage in honest discussions around the challenges in their lives,” he says. Conversations are frequently focused on the ideas of those with humanist perspectives, including actor and author Stephen Fry, novelist Joyce Carol Oates and musician Tracy Chapman, A87, H04.

These conversations, he says, get at the core of humanism, “to being open to the questions that come with being human.”

Perhaps no one at Tufts knows those questions better than Bristol does. It was here that he started his journey to find his enduring truths.

“In high school I was frustrated by the absolute certainty that others had in conjunction with their belief,” he says. “Once I got to Tufts, those truths were not so important anymore. They were not as important to me as building authentic, emotional connections with other people.”