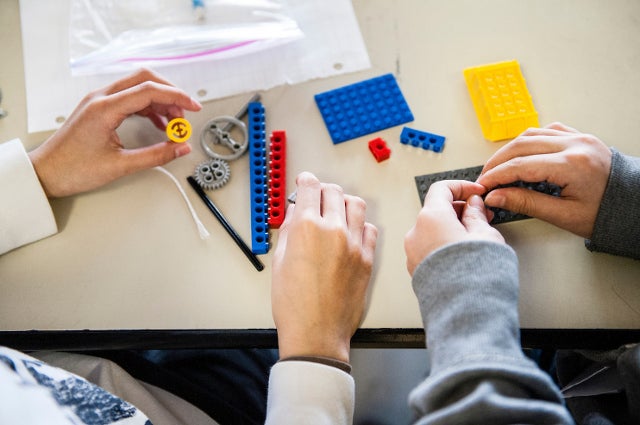 Neat rows of desks and chairs have dotted the landscape of elementary and secondary school classrooms for centuries. But is that really the best learning environment for children in the 21st century, where future success is increasingly reliant on such attributes as creativity, innovation, problem solving and critical thinking?

At the International School of Billund (ISB) in Denmark, Tufts engineers and educators are working with teachers and administrators to better evaluate how students navigate what is known as a makerspace, a wide open area where kids have fun making robots, musical instruments and other things. In this “classroom,” students learn though exploration and play.

“If you want students to learn how to learn, to learn from each other, and to learn to be creative, you need to design the right space,” says Chris Rogers, professor and chair of mechanical engineering whose research focuses on pre-college education and how students grasp difficult concepts. He conducts much of his research through Tufts’ Center for Engineering Education and Outreach (CEEO), which has its own makerspace and is celebrating its 20th anniversary this year.

The two-year study at ISB is using a new makerspace called the Creator Space to help teachers encourage their pre-K through middle school students to tap into their innate curiosity and imagination and drive their own learning.

“By collaborating with ISB on the development of the makerspace, we can help make the school a showpiece of what is possible when schools adopt the idea of learning through play,” says Brian Gravel, E01, E04, G11, an assistant professor of education at Tufts who is leading the project, which the Lego Foundation has funded. The Lego Foundation was instrumental in founding ISB, a private institution that opened in 2013 with the goal of using play and creativity to encourage kids to become enthusiastic lifelong learners.

The ability of makerspaces to change the education paradigm is a concept in which Tufts is expanding its expertise across multiple disciplines. In addition to Rogers, Gravel and Ethan Danahy, E00, E02, G07, a research assistant professor at the CEEO, faculty and graduate students from the CEEO, the Department of Education, and the Eliot-Pearson Department of Child Study and Human Development, including Professor Marina Bers, are involved in the project.

Matt Mueller, E15, a doctoral student in mechanical engineering, is focusing his dissertation work on makerspaces as interactive environments, specifically how the design of makerspace tools (at ISB and elsewhere) determines the ways in which students learn.

Amanda Strawhacker, A11, G13, a Ph.D. student in Eliot-Pearson’s Developmental Technologies Research Group, is observing ISB kindergarteners as they direct their own play and exploration. It’s exciting, she says, to work in a school “that believes in the power of kids to shape their own learning.”

The importance of makerspaces doesn’t end when a student graduates from high school, however. Dean of Engineering Jianmin Qu says he is committed to making investments in makerspaces for both undergraduate and graduate students at Tufts. At its core, he says, engineering is problem solving, and that takes place in the 3-D world, not in a 2-D textbook.

The makerspace movement is built on the philosophy that learning happens best when students are applying it practically to “meaningful work, as they solve problems that matter to them,” Gravel says.

For example, ISB took part in the Billund Builds Music project last fall, which yielded a windfall of interesting insights. In a collaboration between the Billund municipality and Tufts, more than 4,000 students were given the assignment to design and build their own musical instruments, and then give a performance. During the weeklong activity, the Tufts and Danish researchers observed and recorded children’s creative problem-solving skills and their math and science skills as well.

“It was amazing to see how kids responded,” says Rogers. One of the most inventive projects to emerge came from an ISB student who created a novel music instrument that he slipped on and then played by moving sticks up and down it. Most importantly, the week led to classroom conversations and a physical understanding of the science of music, such as how vibration works.

Makerspaces need to be viewed as integral to a school’s overall success, as they are at ISB, Gravel says. In the future, he envisions makerspaces as central resources, much like a school library. Makerspaces can also be places where educators test out different approaches that could change the ways in which they teach traditional subjects, such as science, math and even language arts.

The project at ISB, with a focus on best practices in an internationally diverse school, “has potential to really move the makerspace conversation in formal education forward,” says Rogers.