A Way In for Outside Artists 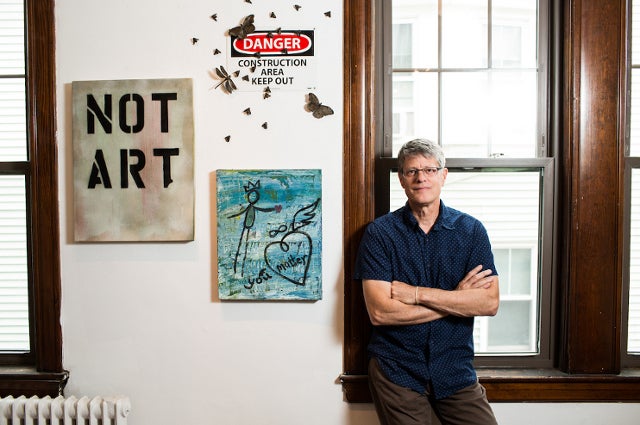 A young man spray-paints his name as a logo on a basketball court in Boston. Another kid, in suburban Connecticut, carves something similar into a tree behind his home—his own “tag” inspired by graffiti-clad subway cars he’d spotted on family trips to New York City.

No matter where it’s done—in public spaces or hidden places—or who creates it, street art is a pure, free expression of self, says Karl Stephan, G15.

Stephan explores the role of this medium as curator of an exhibition of street art and street-inspired studio art, Wall to Wall: Art Builds Community, which runs through Oct. 30 at the Nave Gallery in Somerville, Massachusetts. The show features more than two dozen local artists, including several alumni of Tufts’ master of arts in teaching art education program and graduates of SMFA at Tufts. 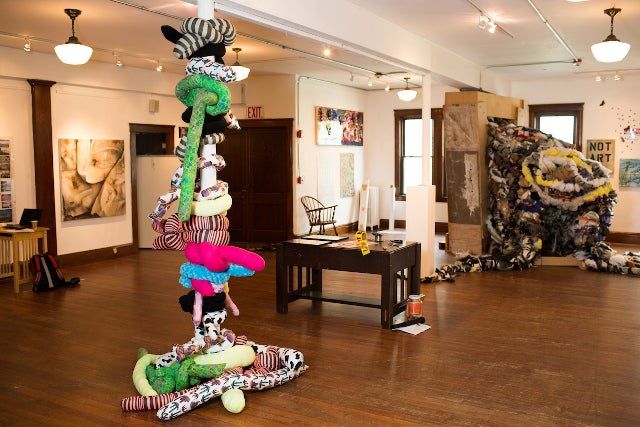 A view from the “Wall to Wall” exhibition. Photo: Jake Belcher
That kid in Connecticut who carved his tag into the tree was Stephan. Now he splits his time painting and teaching drawing, painting and printmaking at his studio in Cambridge and at the Museum of Fine Arts in Boston. He maintains his passion for street art by documenting the ever-changing work on the Cambridge Graffiti Wall at Modica Way, just around the corner from his studio. For more than six years, he has photographed thousands of images and posted many on Facebook and Instagram.

Several of the artists featured in the Nave Gallery show are regular Graffiti Wall contributors, including Cedric Douglas, who, at age 14, painted his name across a basketball court in Boston’s Uphams Corner neighborhood and was arrested for it.

“That court was old and worn out,” Douglas says. “The cop asked me why I did it. I told him just to beautify it a little.” Two months later, after the Boston Globe caught word of that exchange and published a story about it, the city began to renovate the park. “The city redid the whole court with brand-new rims and a fence,” he says. He took away the idea that people can make positive differences in a community by making art.

Art Where You Find It

Fast-forward 20 years. Douglas is now a leading community arts activist. He put an Uphams Corner Public Arts Commission grant to work by creating the Up Truck, a big white van, sometimes used as a canvas itself, that he and his team fill with art supplies that they deploy along busy sidewalks to engage passersby in art projects.

“What would make our community better?” he asks these casual creators, and then helps them express their ideas through simple, fun art activities. “At first they’re like, no, no, I can’t do that,” he says. “But then they see what they can do and start to get excited.” The projects can be as simple as writing down a few words in marker, pen or spray paint.

Still, street art is often “pigeonholed as gang activity and associated with poverty and poor education,” Stephan says. “And yet it’s actually very similar to just about any other artistic movement that you can think of.”

“Artwork in the street is vulnerable,” says Caleb Neelon, the author of History of American Graffiti (Harper Design, 2011), who’s included in the Nave Gallery show. “You have to create it with respect and integrity, and at the same time know that there will be a lot of people who hate it and will speak up about it as well as [those who will] love it and speak up about it.”

Street art always comes back to that universal desire to be seen and heard—to announce one’s place in the world.

A mixed-media piece in the show, Story of Freedom, by Larry Wynn, G15, embodies that notion. Made from materials such as felt, paper, seaweed and embroidery floss, the work is a vertically arranged triptych of three squares composed in the loose graphic style associated with street art.

“Every kid wants to fly, and when you reach 18, you want freedom from adults, but in actuality, as you become an adult you’re placed in a cage of expectations,” says Wynn about his piece. “The last panel shows how you can reach that freedom after all by being who you are, by expressing who you are. And then you really can fly.”

Another piece in the show is the interactive online art project What did you see? by Patricia Hautéa, G16. The goal, she says, is to “put a face on and give voice to those who experience microaggressions and racism on a daily basis and highlight the collective experience among people of color.”