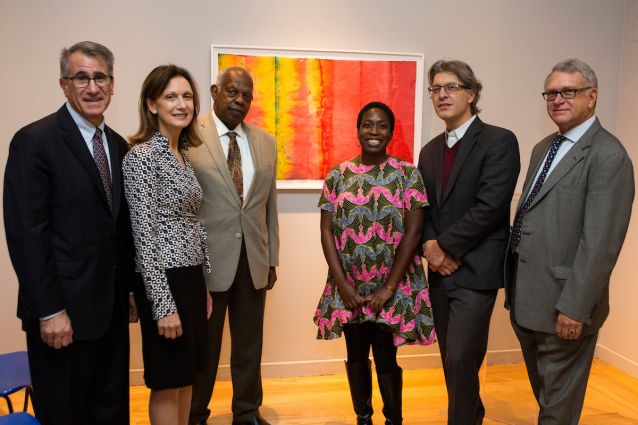 MEDFORD/SOMERVILLE, Mass. (October 21, 2016) -- Tufts University today celebrated the newest addition to its permanent art collection with the unveiling of “Fold XII” by Sam Gilliam, an artistic innovator who is considered one of America’s greatest living abstract painters and a leading light in the current renaissance of African-American art.

The celebration took place Friday in the Koppelman Family Gallery in the Tufts Art Gallery located in the Aidekman Arts Center.

“We’re honored to add the work of such a distinguished, groundbreaking artist to our collection, and we are thankful to the late Dr. Maurice S. Segal, a dedicated friend and supporter of the university whose generosity made this acquisition possible," said Tufts University President Anthony P. Monaco.

The addition of “Fold XII” comes as Tufts is reaffirming its commitment to the arts with its recent acquisition of the School of the Museum of Fine Arts, creating an opportunity to redefine the role of fine arts education in the 21st century and establishing a unique institution: the country’s only art school that is affiliated with a world-class museum and is also part of a major research university.

"The addition to our collection of a work by the incomparable Sam Gilliam is thrilling, especially in the wake of the dedication of the Smithsonian's National Museum of African American History and Culture,” said Nancy Bauer, dean of the SMFA at Tufts. “It signals Tufts' renewed commitment to playing a leading role in promoting the education and expression of a wide variety of artistic voices.”

Gilliam's work, which spans a variety of styles, is prominently featured in many galleries and museums. Gilliam, 82, is credited with introducing painted canvases without stretcher bars, draping them from ceilings or arranging them on walls and floors. He has produced geometric collages inspired by jazz music, quilted paintings, textured paintings, and large-scale installations, including a 28-foot-long installation in the lobby of the recently-opened National Museum of African American History and Culture.

In recent years, his work has enjoyed renewed interest among collectors who have rediscovered African-American artists, fueling a booming market in their art and increased media attention. Gilliam has been the subject of several feature articles in national media outlets recently.

"My father loved Tufts and he loved art, and he would have been proud to know that he played a role in bringing this great work to Tufts," said Peter Segal, a Tufts alumnus. Dr. Segal earned both his bachelor's and M.D. degrees from Tufts, was a professor emeritus at Tufts University School of Medicine, and served as a member of the Tufts University Board of Trustees and the Board of Visitors of the Fletcher School of Law and Diplomacy.