Trends in Youth Voting Are Worrying

Even though as a group they can sway elections, young people are less engaged in 2016 than in previous presidential contests 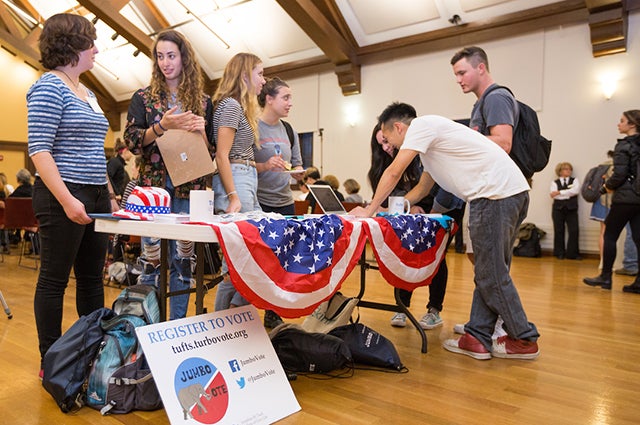 As Nov. 8 approaches, both Democrats and Republicans face an uphill struggle to mobilize young voters who remain somewhat unexcited about either presidential candidate, according to Kei Kawashima-Ginsberg, director of Tisch College’s Center for Information and Research on Civic Learning and Engagement (CIRCLE).

Drawing from the CIRCLE’s new survey of millennials (people aged 18 to 34), and other studies about youth civic and political engagement throughout this election season, Kawashima-Ginsberg spoke with Tufts Now about where the youth vote—or lack thereof—might tip the scales on election day, and the long-term consequences of young people’s eroding trust and declining participation in the political process.

Kei Kawashima-Ginsberg: Hillary Clinton is winning by a very large margin, which is not very different from the last couple elections, when Obama was winning with a large lead. What’s different is that no one has a decisive majority in the polls. Only 49 percent say they will vote for Clinton, which is below the level of support President Obama drew from youth in 2008—66 percent—and 2012—60 percent.

When we looked at how young people actually feel about the candidates they chose, we found Clinton supporters were much more ambivalent and sometimes flat-out negative compared to Trump supporters, who were much more quick to say they were excited about Trump—32 percent, compared to 18 percent for Hillary. And in describing the two candidates, 40 percent of millennials in our survey used at least one negative word.

The thing that drove high youth turnout in 2008 and with Bernie Sanders in this year’s Democratic primary is that young voters were just thrilled to be supporting someone, and the potential for major change they could believe in. Especially among college students, there was excitement about having someone authentically representing their views. Young voters don’t seem to have that kind of candidate this election.

At the same time, 60 percent believe that the outcome of the 2016 election will significantly affect everyday issues, a perception that’s related to likelihood of voting. So millennials are taking this election seriously, and though they may not be excited, they will still want to fight for their future with their votes.

Will former Bernie Sanders supporters turn out to vote for Clinton? How will these numbers stack up against young voters who turn out for Trump?

Almost two-thirds of former Bernie Sanders supporters who plan to vote are saying they now support Clinton, but a significant minority of millennials, especially those who don’t plan to vote, say they still support Bernie Sanders, or that they refuse to accept the major party nominees.

We also looked at young people who supported other Republican primary candidates, and only a little over one-third of them are supporting Donald Trump. Some actually turned into Clinton voters. If the Republican party is trying to get a solid base of young conservative people to come support Trump, that’s probably not happening.

Both parties have their own battles. For Democrats, young people are often more progressive than the older people, but can they get behind Hillary Clinton if she is too moderate in some ways? Can Republicans stop moderate conservatives, who would have normally voted Republican, from becoming Democrats in this election?

How much will the youth vote matter in this presidential election?

In 2012 in some of those key swing state races, President Obama had really decisive youth support, 60-plus percent. If young people had split their votes half and half between Romney and Obama in all four swing states we analyzed (Florida, Virginia, Ohio and Pennsylvania), Governor Mitt Romney would have been President Mitt Romney today.

The key states where young people can affect the outcome have been changing day to day, but at this point in the presidential race, they are Iowa, New Hampshire, Pennsylvania, Arizona and Ohio. These states have a history of high youth voter turnout, a history of really close calls in presidential elections or congressional races, and a candidate support pattern that’s very different from that for older adults, who in all these states tend to vote Republican, while young people tend to support Democrats.

Youth mobilization in these areas will be really important from now until Nov. 8. While older voters have made up their minds months before, young people are known for deciding the week before or five days before who they’re going to vote for.

Will this election affect youth voter engagement down the road?

We’ve been finding a fair amount of skepticism among young people about whether they trust in the election and in voting systems. Some 53 percent of millennials feel the election can be bought “often,” and 80 percent believe that non-establishment candidates are prevented from running. For young people who came into this electorate with such a bitter taste in their mouths, it’s a natural reaction to say, why should I participate.

Here’s another interesting number. While 75 percent of young people are paying attention to the presidential race, only 28 percent are watching the Senate races—that’s really low compared to recent elections.

Congressional, local and midterm elections really tell you how active civic and political engagement is. Midterm youth engagement is going down, and I think this election season could knock engagement down even more.

What can we do to get young people more involved?

Many people believe this is an opportunity to rethink how we are engaging with young voters. In our style of civic engagement, a presidential election is the first time many young people vote. It’s a rite of passage, an entry point to political engagement.

Ideally, we would engage young voters much earlier and strengthen their education to include more regular and frequent political discussions, so that students, starting at an early age, form a habit of engaging in lively and even controversial discussions in a skillful and civil manner. We would try to figure out how the media can communicate better about policies and platforms, and not so much about the personalities of the candidates. Adults in children’s lives play really important roles, too—young people who grow up in a family that encourages expression of different opinions and talk about politics are more civically and politically engaged.

For those who believe in democracy, it’s really important to combat the perception that the election is rigged. It goes two ways—the government has to trust in the people, and people have to have trust in the system. If that trust is broken, we really can’t have a democratic election.