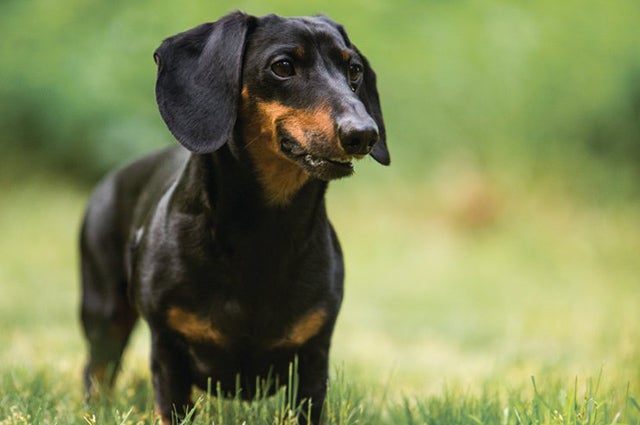 Nothing prepared Leslie and George Devol for the Cujo-like behavior of their dachshund, Otto. The sweet puppy they brought home had morphed into a snapping, snarling dog 18 months later.

The experienced dog owners couldn’t pet Otto, pick him up or put a collar and leash on him. They tried working with an animal behaviorist, then a dog trainer, but the tips they received seemed to make Otto worse. After reading the book Dogs Behaving Badly, by Nicholas Dodman, then director of Cummings School’s Animal Behavior Clinic, the Devols drove from their home in New Canaan, Connecticut, for a consultation. “We had to put Otto in the back seat and barricade him away from us, like a vicious animal,” says Leslie.

Dodman and his colleague, veterinarian Stephanie Borns-Weil, V07, got to the root of the problem. Otto had what is known as conflict aggression, which had been brought on or exacerbated by pain and chronic discomfort. With this type of behavior problem, dogs that are anxious about unpredictable interactions—say their owner reaches down to stroke them or pick them up—overreact in order to control the situation, says Borns-Weil. Otto needed two disc surgeries to correct his back pain and dermatology care for a miserable itch.

The Tufts veterinarians started Otto on the antidepressant Prozac. “The medication greatly helps with impulse control, almost as if it lets dogs think for a moment about whether an interaction is really that much of a threat before they react,” says Borns-Weil.

She and Dodman then worked with the Devols to ensure their interactions with their nervous pooch were more predictable and less threatening. Using a protocol called cue-response-reward, the Devols taught Otto to sit and accept a treat to signal that he was OK with each activity. “He knows that if he doesn’t sit to get petted, for example, he doesn’t get the reward, which in that case is petting,” says Borns-Weil. “So it gives him a way to say, ‘No thank you’ other than by biting.”

These days Otto, now 5, doesn’t mind being picked up and petted. “They gave me my dog back,” says Leslie. “He’s happy.”

Borns-Weil credits the Devols’ three years of hard work for their pet’s turnaround. “Some people think if you just love a dog enough, it will come around. But a dog that behaves like Otto has a canine mental illness. It’s a strong human-animal bond that survives being bitten. When owners can translate that into the dedication to work with a non-typical pet to help it have a full and rich life, well, that’s a truly exceptional display of love.”

Genevieve Rajewski can be reached at genevieve.rajewski@tufts.edu