Bees to the Rescue 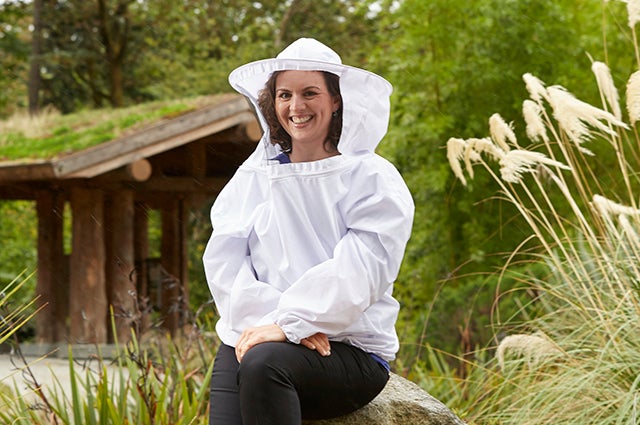 Marina Pevzner Hennessy, F06, used to be petrified of bees—but that was before she landed on a way to help villagers in Myanmar earn a decent living. Now residents of 30 villages in Southern Shan State, on the Chinese border, are earning up to $1,000 a year from the hives she has trained them to tend through Plan Bee, a project she founded in 2013.

The income villagers make from selling honey has had another benefit—it has reduced flight into urban areas, where migrants often end up living in slums, says Hennessy, who is the head of global partnerships at TAG International Development USA, a nonprofit that uses Israeli experts to help developing countries confront economic and other challenges.

TAG had run a similar beekeeping program in Vietnam, and thought it could fly in Myanmar, which already had a honey industry. The Myanmar project is supported by a multi-donor fund called LIFT that is managed by the United Nations.

Honey is just the start. Plan Bee’s homegrown colony of more than 1,000 beekeepers has joined community enterprises that sell pollen, royal jelly (the nectar worker bees make to feed their queen), candles and balm. A regional cooperative established by the project buys the honey and related products from the beekeepers and sells them at premium prices to high-end markets.

Honey is flowing so freely in Myanmar now that there is a growing export market. The local beekeepers are making additional income through a visitors’ center, where tourists learn about beekeeping. Southern Shan State is a popular destination because of the floating gardens on Inle Lake and Pindaya Caves, a Buddhist pilgrimage site.

When they’re not making honey, the bees are pollinating crops on nearby farms, increasing yields. Mustard seed production, for example, is up 97 percent, TAG reports.

Hennessy, who is based in Seattle, visits Myanmar every three months to check on the project’s enterprises, which engage nine ethnic groups that speak several different languages.

One challenge they face is the growing use of agricultural chemicals, which could kill the bees. Hennessy helped forge a partnership with the agrochemical firm Syngenta to teach local farmers how to apply pesticides correctly.

The intervention appears to have been successful. “This is one of the only countries where bee populations seem to be growing rather than declining,” she says.