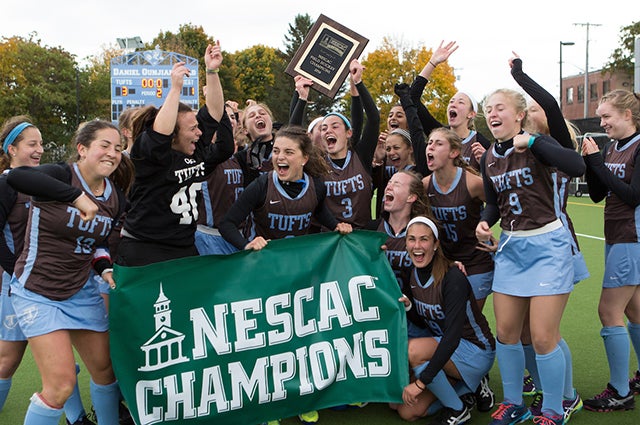 The Tufts field hockey team punched its ticket into the NCAA Division III Championship on Nov. 6 by winning the New England Small College Athletic Conference (NESCAC) title with a 3-1 victory over Middlebury College on the Jumbos’ home turf, Ounjian Field.

The Jumbos (16-2) will make their ninth NCAA appearance and their first since 2013 when they host the second and third rounds of the Division III championship this weekend at Ounjian Field.

The Division III second-round winners will play in the third round on Nov. 13, with a berth into the NCAA Final Four on the line. The Division III semi-finals and championship game will be played Nov. 19-20 on the campus of William Smith College in Geneva, New York. 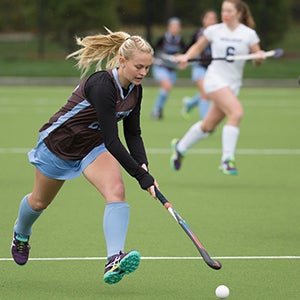 Forward Shannon Yogerst, A20, sprints up field during the NESCAC field hockey finals on Nov. 6, when Tufts defeated Middlebury, 3-1, to capture the championship title. Photo: Anna Miller
The NESCAC win over Middlebury was the second conference crown for head coach Tina McDavitt Mattera’s Jumbos; the first was in 2009. Leading the team to victory were senior Annie Artz, who scored two goals, and classmate Nicole Arata, who notched two assists.

Tufts went ahead quickly after earning a penalty corner opportunity just one minute into the game. They executed it perfectly, with the insert by junior Mary Travers going to junior Celia Lewis. She passed to Arata, who sent the ball to Artz in front, and her shot was deflected by a Middlebury defender into the goal just 1:28 into the game.

The Panthers’ first good scoring opportunity came in the fifth minute when a shot by sophomore Grace Jennings was saved by Tufts sophomore keeper Emily Polinski. Seconds later, Jennings took an aerial shot that was just wide left of the cage.

The Jumbos received another corner with 25 minutes on the clock and scored again on a similar play. With Travers inserting, her pass to Lewis was sent to Arata, who found Travers at the right post to give Tufts a 2-0 lead at 10:30 of the first half.

Middlebury senior goalie Emily Miller kept the margin at 2-0 with a trio of saves in a matter of seconds late in the first half on strong attempts by Tufts junior Mary Kate Patton, Lewis and Travers.

The Panthers earned their only corner of the first half as time expired, but could not put a shot on goal.

Shots were 6-3 in favor of Tufts in the first half, while the Jumbos had three corners to Middlebury’s one. Miller made three saves in the opening 35 minutes; Polinski made two.

Middlebury cut the lead in half at 11:32 into the second period. Sophomore Molly Freeman found Jennings open in the left side of the circle. Polinski was screened, and Jennings’ shot slipped past her into the right side of the cage, making it 2-1.

The Jumbos responded immediately by earning a corner, but Arata’s shot was saved nicely by Miller.

The Panthers played short-handed most of the remaining 18 minutes because of penalties. They were whistled for four in the second half and five overall.

A great individual effort by Travers set up Tufts’ insurance goal with 5:34 to go in the second half. With strong stick work, she created her own shot and sent one that was deflected into the air where Artz knocked it home for the 3-1 Jumbo advantage.

Neither team had another shot after that, and the Jumbos soon rushed the field to celebrate their first conference crown in seven seasons.

Tufts finished with a 13-4 advantage in shots and 7-1 on corners (4-0 in second half). Polinski finished with two saves, while her counterpart, Miller, recorded five.