Jumbos’ season continues despite a disappointing loss to Middlebury in the NESCAC championship on Nov. 6 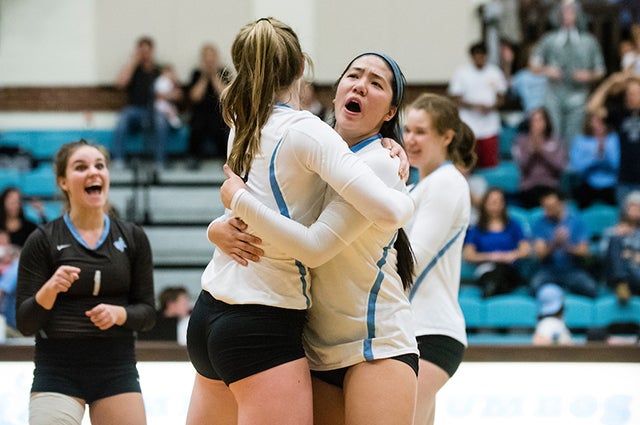 The Tufts women’s volleyball team received an at-large invitation to the NCAA Division III tournament and will host regional action this weekend (Nov. 11-13) at Cousens Gymnasium.

Advancing to the NCAA Regional took some of the sting out of the top-ranked Jumbos’ disappointing loss on Sunday (Nov. 6) to second-seeded Middlebury College in the 2016 New England Small College Athletic Conference (NESCAC) championship.

The Springfield-Endicott and MIT-Framingham winners will meet in the semifinals on Saturday at 1:30 p.m. The UMass Boston-Johnson & Wales winner will play the victor of the Tufts-Maine Maritime match on Saturday at 4 p.m.

The eight teams playing at Tufts this weekend are vying for a spot in the national quarterfinals. The University of Wisconsin-Oshkosh will host the final three rounds of the Division III championship Nov. 17-19 at the Kolf Sports Center in Oshkosh.

This is the third time that Tufts women’s volleyball has hosted an NCAA Regional. They did so in 2008 and 2009, and won the regional title in 2009.

In the NESCAC championship against Middlebury on Nov. 6, the Jumbos came out on fire in the first set, taking an early lead and going on to win, 25-14. But the Panthers responded immediately and quickly took the second set, 25-19, to even the match at one apiece. 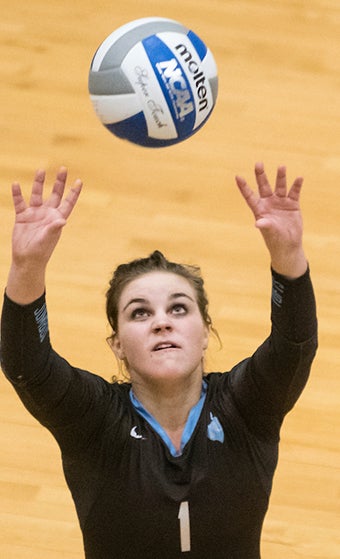 Kelly Klimo, A20, had 31 digs in the NESCAC championship match on Nov. 6. Photo: Alonso Nichols
The two teams battled in the third set. The Jumbos took an early lead, 7-3, but couldn’t hold on. The Panthers started their comeback, and tied the match at 11 thanks to a kill from Becca Raffel and a Jumbo error. The teams knotted the score two more times, but with things tied at 14, the Panthers got two kills from Raffel and a service ace from Gigi Alper and went on to a 25-19 win to take a 2-1 match lead.

The fourth set was the closest of the day. The Jumbos led most of the way until the Panthers scored three consecutive points to tie the set at 24 on a couple of Jumbo errors and two kills from Raffel. But the Jumbos got a kill from freshman Brigid Bell and a Panther error to take set four, 26-24.

In the match-deciding fifth set, Tufts once again took a lead. The Panthers, down 10-6, started their comeback and scored seven points behind the serve of Raffel before the Jumbos got a point off a Panther error. Up 13-11, the Panthers capitalized on two Jumbo errors, winning the set, 15-11, and the NESCAC title.

Lauren Ebstein is associate head coach of softball at Tufts.