Leading from the Sidelines

Andrew Bindelglass, A17, never got to play football at Tufts, but that didn’t stop him from becoming a key member of the team 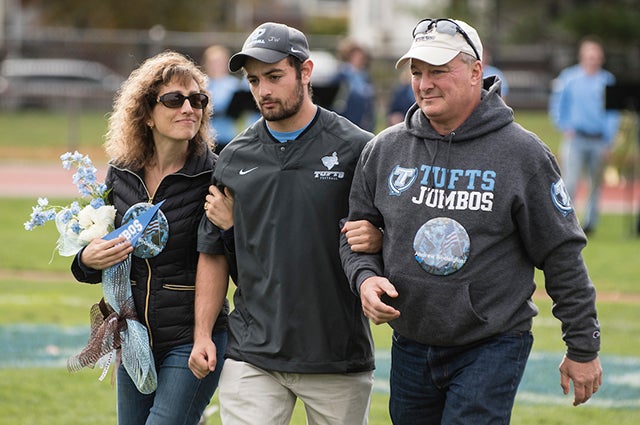 As the Tufts football team was preparing for its Oct. 29 game against Amherst, defensive coordinator Kevin Farr got a text at 11 one night from student assistant coach Andrew Bindelglass. He’d been watching video and thought he saw something the Jumbos could use to their advantage.

Farr agreed, and Bindelglass, A17, ran a video session to show the Jumbo defense what to look for in this particular situation. “That’s [Andrew], unsolicited, watching film on his own, looking for some way to contribute,” Farr said. “It’s his passion, and he’s pretty good at it.” 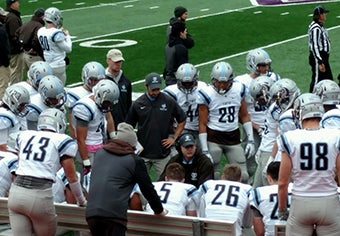 On game day, Bindelglass, in black shirt, standing, is on the sidelines, charting plays and helping the defense make adjustments. “I have 90 best friends who wear that uniform every day or help coach every day,” he says.
Bindelglass is one of seven graduating seniors on the team who’ve contributed behind the scenes to the Jumbos’ 6-1 season. With one game left to play on Nov. 12 at Middlebury, they’ll end their season undefeated at home.

This special team of seniors, whose playing careers ended for one reason or another, has remained committed to Tufts football. They’ve seen the program rise from an 0-8 season when they were freshmen to one of the top teams in the New England Small College Athletic Conference (NESCAC).

Bindelglass, in particular, has persevered. With the team forced to adhere to the NESCAC’s 75-man roster limit for football, he was cut from the active roster in each of his four years. Still he returned each year to compete for a spot. Undaunted when that didn’t happen, he remade himself into a student coach on whom the staff relies heavily.

“My mindset has always been that I love football, and I always wanted to play football,” Bindelglass said. “But deeper than that was that I want to help this team. There are 80 some-odd guys, players and coaches who would do anything for me. Knowing that, I feel like I have to do anything I can to help them.”

The coaching staff first saw his level of dedication when they were recruiting him out of Joel Barlow High School in Easton, Connecticut. From day one, he wanted to be part of turning the Jumbo program around.

“He wouldn’t go away,” Farr recalled. “His desire to come to Tufts made an impression. He wanted to be here. He wanted to be part of the football program. He wasn’t going to take no for an answer.”

Bindelglass’s first year at Tufts was turned upside down when he contracted a rare but serious infection known as Lemierre’s syndrome. He was hospitalized for three weeks and lost 40 pounds. Still, he was able to keep pace academically and was on the sidelines for most of the football games.

The coaching staff decided they could parlay his commitment to the team’s advantage in the role of student coach. Starting with his sophomore season, Bindelglass quickly mastered the task of breaking down video. His teammates voted to give him the 2014 Frederick B. Hill Loyalty Award.

His role grew as the defensive coaches saw that they could trust his work. In preparation for every game, Bindelglass analyzes video and compiles a detailed binder containing information that the Jumbos use on game day. During games, he’s on the sidelines, charting plays and helping the defense to make adjustments.

“We probably put a lot more on him as a student assistant than other teams do, but he’s earned it,” Farr said.

Bindelglass and the other graduating seniors arrived at Tufts when the football program was mired in a 31-game losing streak that ended on Sept. 20, 2014, when the Jumbos beat Hamilton, 24-17, in their season opener. The path to the turnaround was set by the team leaders who mentored them as underclassmen.

“There’s not a guy in our class who wouldn’t say that we owe a lot of what this program is now to the guys who came before us, guys who put the work in and didn’t see results,” Bindelglass said. “But they instilled a culture in us to put your head down and work hard, persevere. I think those are the best qualities of this class, and I think we wouldn’t be the way we are if it wasn’t for the guys who went before us.”

Along the way, Bindelglass, a political science major with a minor in history, found a potential career path—he wants to coach.

“I’ve already apologized to his parents,” Tufts head coach Jay Civetti said. “You don’t necessarily decide to go to Tufts to become a coach. However, he has a talent for it and has really made a difference for us.”

A number of Jumbos have moved on to football coaching careers. Ben Bloom, A05, G08, and Andy Dickerson, A03, G05, both offensive linemen in the early 2000s, now coach in the National Football League with the Dallas Cowboys and Los Angeles Rams, respectively. Former tight end Shane Waldron, A02, works in quality control for the Washington Redskins. Several others coach high school teams.

Though nothing is official yet, Bindelglass hopes to stick around the Oval and coach while pursuing a graduate degree at Tufts next year.

“I think football brings people together in a way that you don’t get to experience most days,” he said. “I have 90 best friends who wear that uniform every day or help coach every day. That’s a bond that not a lot of people are lucky enough to get in life.”