While inconsistent campaign rhetoric makes it difficult to forecast where the U.S. is headed, some Fletcher School experts are wary of president-elect’s hard-charging style 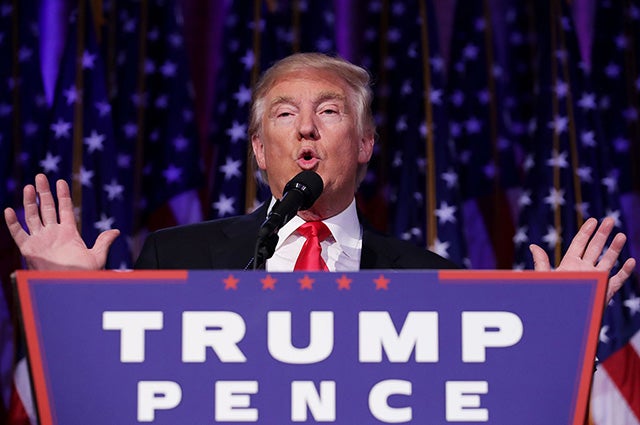 It’s hard to predict how Donald Trump will affect U.S. foreign policy, because the president-elect was inconsistent during his campaign and has backpedaled from some of his promises since his election, professor of international politics Daniel Drezner said at a panel discussion at the Fletcher School of Law and Diplomacy on Nov. 14. Still, he and other professors talked about how the incoming administration may prompt an increase in extremism and instability around the globe.

The lightest moment of the evening came when Fletcher School Dean James Stavridis, F83, F84, said that Trump’s election “cleared my calendar for the next four years.” Stavridis, a former NATO commander, was reportedly considered as a potential running mate for Democratic presidential nominee Hillary Clinton, and many had wondered if she might tap him for her administration.

In contrast, professor of international law Michael Glennon, who served as legal counsel to the Senate Foreign Relations Committee in the late 1970s, told the standing-room-only crowd, “I would flip hamburgers before I worked for Donald Trump.”

Drezner said he would not be surprised if a terrorist group staged an attack in an attempt to provoke Trump, knowing that he “doesn’t like to back down.” Drezner also said the U.S. might see a “replay of something like the Bay of Pigs,” the failed 1961 military invasion of Cuba. “It wouldn’t shock me if this president approved a remarkably stupid idea” like that, he said.

Drezner was one of more than 100 Republican national security experts who signed a letter during the GOP primaries arguing that Trump was unfit for office and would “make America less safe.” During the panel discussion, he argued that Trump does not have a strong enough understanding of foreign policy to regulate the staff who will be advising him, and he “may not be interested in knowing that much.” Trump will probably focus on trade and illegal immigration in his first year and is likely to reverse key accomplishments of the Obama administration that were made by executive order, Drezner said. Those could include the U.S. commitments to the Paris climate accord and the Iran nuclear deal.

A Climate for More Extremism?

With Trump leading U.S. policy, we can expect more civilians around the world to die, more women to die and at younger ages, and extremism to deepen, said Dyan Mazurana, an associate research professor at Fletcher and research director at the Feinstein International Center at Tufts’ Friedman School of Nutrition Science and Policy. She said this would be the result of Trump likely reducing U.S. financial support for the United Nations as well as for disaster response and development. Mazurana said Trump’s campaign statements in favor of torture and the intentional killing of family members of terrorists threaten humanitarian principles and international law and could foment greater extremism.

Eileen Babbitt, a professor of practice of international conflict analysis and resolution and director of the Fletcher School’s Institute for Human Security, cautioned that the zero-sum, hard-bargaining style that Trump has employed in business may escalate tensions on the international stage, where “escalation leads to potentially devastating consequences.” For example, she said, if Trump pulls the U.S. out of the Iran deal, Iran could be free to develop its nuclear capacity, and the likelihood of a pre-emptive strike from Israel, if it feels threatened, would increase. “I hope calmer heads prevail,” she said.

Glennon said that U.S. democracy is in crisis because of “pervasive civic ignorance.” Although his 2014 book National Security and Double Government states that high-level government bureaucrats wield great power over American security policy, Glennon said it would be inappropriate and undemocratic to rely on such unaccountable power to restrain an elected official. Instead, he argued that Americans who do not support Trump’s policies should “resist with empathy” by organizing, lobbying and filing lawsuits. Quoting Irish statesman Edmund Burke, Glennon said, “All that is necessary for evil to triumph is for good men to do nothing,” then noted, “and I would add, women.”

In response to an audience question about Trump’s threats to abandon NATO, Stavridis said he thought the president-elect might recognize the value of the $300 billion that other nations contribute to the military alliance as a “pretty good deal,” even if it could be improved. He said, “I think it’s a little soon to ring the bells of the requiem for NATO.”