As the snow falls, national championship comes down to double OT and a shootout before Messiah tops Tufts, 1-0 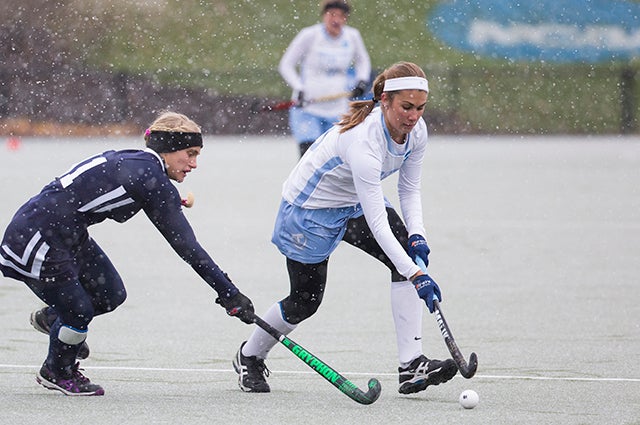 On a cold and snowy day, the two top-ranked field hockey teams in NCAA Division III, No. 1 Messiah and No. 2 Tufts, didn’t score in 100 minutes of play on Nov. 20, and the national championship was decided by a shootout that Messiah won to claim its first title with the final score of 1-0.

Messiah, 22-1, entered the game at William Smith College in Geneva, New York, with the highest-scoring offense in the country and had not been held scoreless since a 1-0 season-opening loss to Shippensburg, which won the NCAA Division II national championship on Sunday.

The Jumbos, who ended their season with a record of 19-3, were in pursuit of their second national championship; they won the title in 2012.

Tufts was able to get offensive pressure going early, drawing four penalty corners in the first half. But a strong Messiah defense prevented the Jumbos from putting the ball in the goal.

With about 13 minutes left in the first half, junior Ellexa Thomas received a green card, and the Messiah Falcons pounced. They got the ball to the Tufts end of the field and drew their first penalty corner. The Falcons created some chaos in front of the goal, but a defensive save by sophomore Issy Del Priore, along with some strong Jumbo defense, kept the Falcons scoreless.

The Jumbos had the advantage in penalty corners in the first half, 5-3, but each team got three shots on goal during the first 35 minutes of play.

The ball moved faster as the snow started to stick, and both teams had to battle the conditions and the change in game pace.

With about 10 minutes left on the clock, sophomore Gigi Tutoni got a green card, and the Falcons quickly drew a penalty corner. But the Jumbo defense remained strong. Tufts moved to the Messiah end of the field with five minutes remaining and got off a few shots, but the Messiah defense was relentless.

With under a minute left, Messiah marched to the Tufts end of the field and into the circle, but the shot sailed just wide, and the score stayed locked at zero. Tufts junior Celia Lewis got a green card, as the clock wound down to 16 seconds, but Messiah wasn’t able to make anything happen, and the game went to overtime.

With 9:18 left in overtime, the Jumbos drew a penalty corner, and junior Mary Travers inserted to senior co-captain Nicole Arata, who rifled a shot at the goal. But it went just wide, and Travers, who was in front of the goal, wasn’t able to deflect it into the net.

Carissa Gehman got a breakaway for the Falcons. She got past Del Priore, but sophomore Emily Polinski kicked her shot away to keep the Falcons scoreless. Gehman got another shot off, but it went just wide. With just over 6:30 remaining on the OT clock, the Falcons drew a penalty corner, but Polinski made a diving save to keep the Jumbos alive.

Gehman had another breakaway opportunity, and Polinski came out of the goal. With a wide-open goal, Gehman’s shot went wide.

At the start of the second overtime, the Falcons looked like they were going to score on a Lindsay Bower breakaway when Polinski came out to challenge. Bower passed the ball to Gehman, who didn’t get a stick on the pass.

The Jumbos drew a penalty corner with 13:30 on the clock, and junior Mary Kate Patton inserted to Arata, who dished it off to junior Erin Sanders. That shot was blocked. Tufts got another penalty corner with just over seven minutes on the clock, but Messiah blocked Lewis’ shot. A minute later, Patton got the Jumbos’ fourth green card of the game to put them a player down.

Senior Annie Artz dribbled the ball into the Falcon circle, and drew a man-down penalty corner with just over five minutes remaining, but the Jumbos couldn’t get a shot off.

The wait between the second OT and the shootout was extended so the ground crew could plow the snow away from the front of the goal.

Senior Dominique Zarella, who scored the lone goal against Salisbury on Saturday to send the Jumbos to the national championship, was the first shooter, but was unable to get a shot off against Messiah goalie Shelby Landes. Up first for the Falcons was Gehman, whose first shot was stopped by Polinski. But Gehman got her own rebound and was able to get it past a diving Polinski to put the Falcons up 1-0.

Del Priore shot second for the Jumbos. On her first attempt, she was fouled by the goalie and was awarded another shot, which she was unable to get off. Shooting for the Falcons, Shayna Landis went to the right side to make it 2-0.

Next up for Tufts was Arata, and her shot was saved by Shelby Landes. Donohue came up for the Falcons, but she was called for a foul. In a must-hit situation, Tufts sophomore Fallon Shaughnessy went to the right, let Landes make the first move and then fired a shot past her to keep the Brown and Blue hopes alive. The Falcons’ Kezia Loht fired her shot wide to give the Jumbos yet another chance.

Artz was the shooter in the next must-hit, and as she dribbled to the right, Landes came out and pushed the ball away to clinch the Falcons’ first national title.

Lauren Ebstein, associate head coach of softball at Tufts, can be reached at lauren.ebstein@tufts.edu.