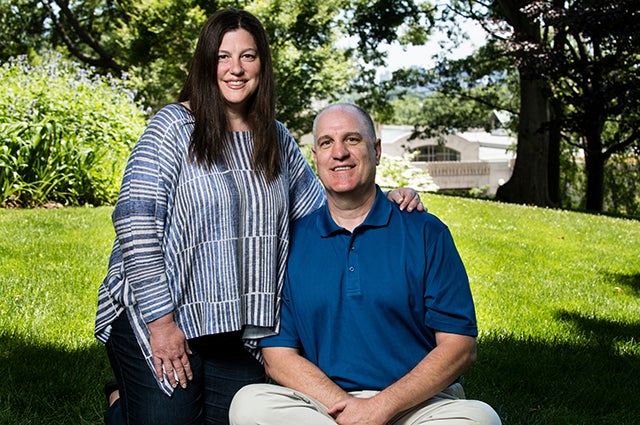 Whenever tenants moved into Riccardo and Dora Ferrelli’s two-family, home rental apartment, Dora would welcome them the same way, according to her daughter, Maria Giatrelis.

“My mom would sew them curtains so they’d have some dressing on their windows,” says Maria, E89, who together with her brother, Rich, A85, has established the Riccardo and Dora Ferrelli Memorial Endowed Scholarship Fund.

Immigrants from a farming village in the Abruzzo region of Italy to Boston’s North End, Riccardo and Dora worked with their hands, Riccardo as a union cement mason and Dora as a seamstress. Although intelligent and self-taught, Riccardo had to work to support his family and couldn’t go to school. He was a voracious reader in Italian and later in English, though neither he nor Dora had more than a fifth-grade education.

But both were keenly aware that education was the way to move forward in life.

“My father used to always say, ‘Working with your hands is honorable, but you’ve got to move forward in your education so there are more possibilities for you,’” Rich says.

Riccardo and Dora built a comfortable life for their family, moving from Boston’s North End to settle and buy a home in Somerville. But they didn’t want their children to struggle like they did, says Maria.

“It was so important for them that we go to college that they basically saved up all their money to send us to Tufts,” says Maria, who commuted to campus for her entire time there, as did Rich.

It wasn’t easy. Applying to Tufts, Rich felt disadvantaged compared to peers whose parents had gone through the American college system themselves and could help them with their university applications.

“In my freshman year, I noticed that other people had this institutional knowledge from parents and grandparents, and that can make you feel like you’re behind and have to catch up,” he says. “If you let that worry bring you down, it’s easy to fall behind.”

But with his parents cheering him on, Rich excelled in his studies. He was inducted into both the Phi Beta Kappa and Omicron Delta Epsilon honor societies and won a Gulf Oil Scholarship during his junior year, which helped cover tuition and landed him an internship at Pittsburgh’s Gulf Oil Company.

With her parents’ support, Maria, too, excelled. Although traditional in many ways, Riccardo and Dora were progressive when it came to education, encouraging her to pursue the male-dominated field of electrical engineering. Maria was awarded a freshman scholarship from the Society of Women Engineers and was later elected president of the society. She was a member of two engineering honor societies, Eta Kappa Nu and Tau Beta Pi.

When Riccardo and Dora passed away within a year and a half of each other, Rich was inspired to create the scholarship fund for first-generation students in their honor.

The gift, which was doubled by the university’s Financial Aid Initiative match, was the least they could do for parents who were so devoted to their children’s education.

Maria and Rich jumped at the chance to help students whose families couldn’t afford all of the tuition, knowing they would face challenges similar to the ones they encountered themselves.

“My parents would be honored to know that they are living on by helping other kids have an opportunity,” says Maria.

Rich’s commitment to enhancing the first-generation experience at Tufts extends even further. He, along with his wife, Yvonne, and their three sons, Richie, Henry and Johnny, also   established the Ferrelli Family Endowed Scholarship Fund for students in Arts and Sciences. Today Rich volunteers with the Tufts Admissions Network as an alumni interviewer and is interested in developing a mentorship program to help students navigate life beyond college. Just as the Tufts experience transforms students, students’ diverse perspectives enrich the Tufts community, he says.

There’s one more reason for his interest.

“For a student who’s worried about competing with folks whose parents and grandparents went to college, it’s nice to be able to say that I’ve been there, and that they don’t need to prove themselves to anyone,” he says.

For her part, Maria has taken a step back from work to raise daughters Julia and Mia, sharing with them the lesson she learned from the curtains her mother sewed.

“I always tell my daughters, ‘When you share, you get more,’” Maria says.