Tufts psychologist Sam Sommers has studied plenty of intriguing behavioral issues, from racial bias on juries and the psychology of freshman roommates to how context influences personal impressions of character.

He’s also a big sports fan. So when Sports Illustrated executive editor L. Jon Wertheim approached him a couple of years ago to apply the same lens to players and their fans, Sommers jumped at the chance.

Their book, This Is Your Brain on Sports: The Science of Underdogs, the Value of Rivalry and What We Can Learn from the T-Shirt Cannon (Crown Archetype, 2016), examines sports trends and myths from a behavioral science angle. Take the popular myth that quarterbacks are the most handsome football players; the science says nope, not so. Ditto the notion that great players make great coaches. And then there’s the chapter titled “Why Rooting for the Mets Is Like Building That IKEA Desk.”

Tufts Now spoke with Sommers about the unexpected discoveries in his research, and what it’s like to view Boston’s intense sports market through an academic lens.

Tufts Now: When you were doing research for this book, which aspect of your findings surprised you the most?

Sam Sommers: Almost every topic we covered had a bit of a presumption about it that often didn’t quite fit the facts. Take, for instance, the chapter on underdogs. Everyone tends to understand, especially in America, that we’re drawn to underdogs. Like Rocky or the 1980 Miracle on Ice Olympic team, fans pull for underdogs. Movies know it, businesses know it. 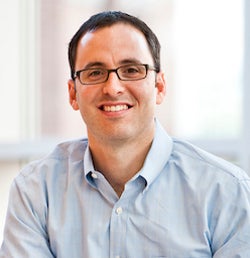 Sam Sommers. Photo: Alonso Nichols
We pull for the underdog in the NCAA basketball tournament, but it’s a fleeting love affair. At the end of the day, everyone’s got their UNC and Duke and Michigan State sweatshirts on. It’s the same with business—everyone talks a good game about buying local and supporting the mom-and-pop shop, but they go on Amazon.

Even if you look at betting in the sports world, underdogs are under-bet. We say with our hearts that we’re big fans of underdogs, and we are. But with our wallets and our hearts, our long-term affiliation is not with those guys; it’s with the blue-chip stocks.

Was that typical of what you found?

What is the most interesting trend you’ve observed in Boston sports?

Boston is definitely a good town to be living in for anyone interested in the psychological and human dynamics of the sports world—people here take it very seriously. It’s especially interesting for me, as a New York sports fan.

One thing we talk about in this book is rivalry. We understand how rivalries dictate our passions and motivations. What we don’t always grasp about rivalry is that usually we are drawn to rivals who are very, very much like us.

So while your average Red Sox fan can give you 50 reasons why they’re so different from the Yankees and vice-versa, to the rest of America those two teams are basically the same: They’re people with funny accents who take things too seriously, who think they’re better than everyone else.

Are all sports fans alike? 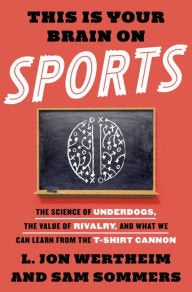 Boston sports fans are no different from any other biased local sports fans—they have blinders that all fans have toward the people and teams that they have allegiances to, versus those that they don’t. For instance, I always find it amusing when Red Sox fans at Fenway boo Alex Rodriguez and chant “Steroids.” I get it, but half of them are wearing Manny Ramirez jerseys, and he was suspended for PED use. And that’s not unique to Boston—everyone does that.

So fans are often blinded by their loyalties?

I’m not a Patriots fan, but it is interesting to look at Tom Brady’s four-game suspension for “Deflategate.” That was a pretty serious suspension. The rest of the football world was pretty happy about it, frankly, because to them, it justified at some level all their suspicions about the cheating that allegedly goes on with the Patriots. And you really see the Boston bias with the Patriots. Other football fans view Bill Belichick as this hooded, grumpy guy whom no one else likes. But in Boston, he’s beloved. The same people get seen through very different lenses based on the viewer’s affiliations.

A chapter in your book talks about paying athletes to appear at personal events, like paying a fee to the New York Giants to show up to a bar mitzvah. If you could hire an athlete for an activity, who would it be, and what would you ask him or her to do?

That’s a terrific question. A lot of what drives people to services like Thuzio [the service discussed in the book that facilitates these arrangements] is the nostalgia. A lot of it is middle-aged guys thinking back to the people who were on their bedroom walls when they were younger.

Who would I invite and to do what? If cost were no object, I would have Mariano Rivera, [the New York Yankee relief pitcher] who is the greatest closer of all time, close out my class. I would just have him walk in to “Enter Sandman” by Metallica—his entrance music during his playing days—and give the last three minutes of my lecture. He would send everyone home happy, because that’s what he used to do for the Yankees and their fans.