Could not retrieve the oEmbed resource.
Performing Arts

A Symphony of Pipes

Back in 2002, Tufts’ Goddard Chapel reclaimed its history. The restoration of the iconic 1883 chapel encompassed every aesthetic detail, including the original pipe organ. Crafted by Boston-based Hooks & Hastings, the instrument was restored to its original condition, and its copper pipes, long concealed behind chancel screens, were unveiled in all their brilliant splendor.

That work more than a decade ago was a fortunate prelude to the arrival of acclaimed organist Christian Lane, the new music director for the University Chaplaincy, who came to Tufts last year after a stint as associate university organist and choirmaster at Harvard.

Praised by The American Organist for playing that is “suave, elegant and exciting,” Lane won the 2011 Canadian International Organ Competition and remains in demand for performances throughout the United States, Canada and Europe.

After earning a B.A. and a sacred music diploma in 2004 from the Eastman School of Music, he went on to the Yale School of Music for a master’s degree. He won a string of first prizes in major organ competitions before his 21st birthday. His first solo disc was released in 2012 on ATMA Classique to critical acclaim. He likes to teach, juggling his job at Tufts—and a similar one at All Saints Parish in Brookline, Massachusetts—with a growing cadre of students at his organ studio in Boston. He also teaches a handful of Tufts students. 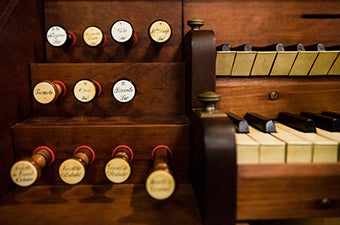 The stops of the chapel organ evoke the flute, strings and reeds. Photo: Alonso Nichols
Just as Lane has mastered the immensely complex instrument—simultaneously navigating multiple keyboards, foot pedals and stops that regulate airflow to certain pipes—he deftly manages the moving parts of the University Chaplaincy music program, which include playing for worship, wedding and memorial services; selecting the monthly tune for the chapel carillon bells; arranging the Halloween midnight organ recital and annual holiday concert; and curating the chapel instruments.

University Chaplain Greg McGonigle says that Lane has re-energized the program with his artistry and interpretations, including hymns for the Sunday night Protestant worship service. “Chris can interpret sacred songs in a way that truly communicates the meanings of the texts and tunes,” he says. “I’ve never heard hymns played with such musicality—it’s like hearing them for the first time, and it brings their meanings home.”

In a rare moment of downtime, Lane talked with Tufts Now about his aspirations for organ music, which is as old as Ctesibius of Alexandria, a Greek inventor (285–222 B.C.) who built an organ powered by water.

Tufts Now: How old were you when you started to play the organ? Who were your early influences?

Christian Lane: I was 6 when I started playing hymns in church in Frederick, Maryland, where my father was a Methodist pastor. I started playing for church services semi-regularly when I was in middle school, and by high school I had a regular, paying Sunday job. A strong influence in high school was my organ teacher, who also did a lot of musical theater in town. I originally thought I’d do musical theater and conduct Broadway shows, but when it came to choosing between the piano and the organ, I realized the organ was more interesting.

The organ engages my brain and my curiosity. It’s exciting because it’s a highly complex machine, and no two organs are exactly alike. So it’s never monotonous, even if you play the same repertoire. As I move around the country performing, that’s a challenge that keeps me fresh.

And you have the daunting challenge of playing two or more keyboards and playing with your feet, and of course working the stops.

It does take a lot of coordination to synchronize everything, but it’s kind of like riding a bike. It’s really, really hard at first, but there is a point where it all kind of clicks. That’s always a special moment in teaching, seeing when that happens with students.

Historically, it’s a pure statement of where organ building was at the end of the 19th century in America. It has the bright and rich tonal qualities that were the highest standards of the day. Each of the stops—they evoke the flute, strings and reeds—when used alone or in varying combinations allows for a breadth of musical possibility that is similar to that of a modern symphony orchestra.

The pipe organ has a revered place in musical history. Bach, of course, is the pipe organ’s most famous composer, and Mozart called it the “king of instruments.” How would you describe your musical approach to the organ?

I think what distinguishes my playing goes back to my musical theater training. I’ve figured out how to make this instrument, which is fundamentally a machine, speak in a way that communicates broad sweeps of music to a listener’s ear. That can be hard to do when you can’t produce louder and softer tones by hitting a key harder or more gently; indeed, no matter how hard a key is depressed, the organ produces everything at the same volume.

I try to delineate a process that leads to musical expression—call it emotive or passionate—I want to make it really beautiful, to shape the notes the way a great violinist can shape a line of music.

If I go to a concert for the pipe organ, what should I listen for?

Hopefully you are going to hear it making beautiful music that communicates in the same way as an orchestra performance at Symphony Hall or a piano recital at Distler Hall here at Tufts. I would hope that it is transformative and makes musical sense. People tell me they are overwhelmed by the flexibility of the instrument and its regal quality, that it can be transcendent. We just need more people to hear those kinds of performances.

Laura Ferguson can be reached at laura.ferguson@tufts.edu. Contact Steffan Hacker at steffan.hacker@tufts.edu.

Why Do We Have Music?

For the Love of Music