The Tufts gridiron squad featured two black players, and a determination to stave off opponents 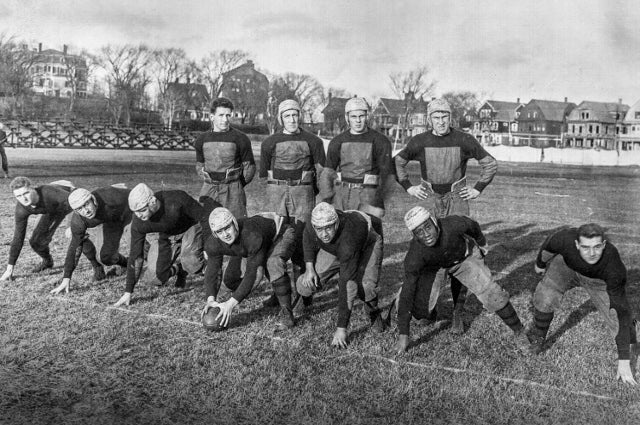 This fall marks the hundredth anniversary of one of the most storied and important football seasons in Tufts history. As the 1916 campaign got underway, it looked to be one of the most exciting ever for the “White-Helmeted Eleven,” as the team was known.

The squad featured standouts such as halfback Oliver “Ollie” Wescott, D1917 (dental students were eligible back then to play athletics); fullback Erling “Dinger” Doane; All-American right tackle Earl Beacham, A1919; and star quarterback James Drummey, E1918. There would be plenty of competition, of course—with Harvard, Bowdoin, Princeton, Boston College and Indiana University all on the schedule, along with a game against Syracuse to be played at Fenway Park—but Tufts College was a national powerhouse that no opponent could overlook.

For all the promise of the team, though, it was something else that made the season so memorable. Two starters on the squad, left tackle William Brown, D1916, and left guard Edward Morrison, were different than the rest of their teammates: they were African-American. The 1916 Tufts football team was an integrated anomaly.

By all accounts, race was not an issue for the players on the team or their coach, Dr. Charles Whelan. It turned out, however, to be a serious issue for some of their opponents. During the second week of October, the team traveled for a highly anticipated contest with Princeton University.

But when they arrived at the stadium, according to an article in the Chicago Defender, a national newspaper serving the African-American community, the Princeton players and fans took one look at Brown and Morrison and promptly announced they did not want either on the field. Coach Whelan would have none of this. A heated argument ensued, but Tufts prevailed in the end and started both men. Unhappy with this result, some of the Princeton players went after both Brown and Morrison during the game.

The Defender reported that Morrison was hurt so significantly that he “went into convulsions between the halves.” So Princeton turned its attention in the second half to Brown, who, the Defender wrote, “withstood every piece of filthy and vile language” that his opponents threw at him. In the end, Princeton emerged with a 3-0 win, a loss made more painful by the fluky nature of the winning field goal. To add insult to injury, Princeton threatened to drop Tufts College and its integrated football team from its future schedule.

Two weeks later, the entire team headed west to play Indiana University in what is arguably the biggest game Tufts has ever played. But when the team arrived at the English Hotel in Indianapolis the night before the game, Brown and Morrison were denied rooms because they were black.

Upon hearing this, Coach Whelan became enraged. According to the Defender, Coach Whelan demanded accommodations be made for both men, or else the entire team “would go back to dear old Massachusetts without playing.” Fearing a huge uproar, the hotel (under guidance from the Indiana athletic department) quickly acquiesced. A separate room was even set aside so the team could eat their meals together. The next day, when Brown and Morrison showed up to play, the 35,000 screaming Indiana fans and players seemed to be interested in football, not race. Both men played the entire game (as they usually did), and when the clock ran down to zero, Tufts had triumphed 12-10.

Though recaps of both the Princeton and Indiana games appeared in numerous newspapers, including the Tufts Weekly, none of those stories mentioned the racism encountered by the team. Only the Chicago Defender wrote what really happened. If not for this publication, the truth behind the 1916 season may never have been known.

The team ended that fateful season with a 5-3 record, punctuated by a loss to Syracuse at Fenway Park that appears to have been the final game in a Tufts uniform for Brown and Morrison. Morrison left Tufts to complete his dental degree at Howard University, where, in the fall of 1920, he became the school’s head football coach. He won three national Black College championships in five seasons, before leaving football to practice dentistry and teach at Howard.

This article first appeared in the Fall 2016 issue of Tufts Magazine.