A Tufts faculty member for more than 45 years and the author of the definitive textbook for dental hygienists, she had just celebrated her 100th birthday

Wilkins was a renowned authority on dental hygiene, and had a profound influence on dental medicine for more than half a century. She was a member of the faculty of the Department of Periodontology for 45 years, and conducted more than 800 continuing education classes. She was the recipient of a number of important awards, including the prestigious Gies Award for Achievement by a Dental Educator in 2012. 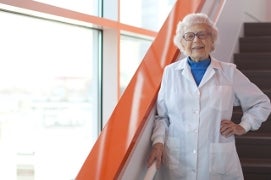 Esther Wilkins. Photo: Yoon Byun
It was her enthusiasm for her work and her drive to educate thoroughly as many people as she could about the power of prevention that made her “a shining star in dental and allied dental education,” said Richard W. Valachovic, president of the American Dental Education Association’s Gies Foundation.

Wilkins wrote what has become the cornerstone text in almost every dental hygiene education program in the United States and around the world, Clinical Practice of the Dental Hygienist, now in its 12th edition. Generations of dental professionals have been educated or influenced by her.

In 2008, she established the Dr. James B. Gallagher Jr., A47, D49, DG68, and Dr. Esther M. Wilkins, D49, DG66, Scholarship Fund, which has supported many Tufts dental students. She met Gallagher, her husband, while both were pursuing a postgraduate certificate in periodontology at Tufts. He passed away in 1988.

Wilkins was slated to receive the School of Dental Medicine’s Dean’s Medal, which recognizes individuals who have demonstrated loyalty, service and generosity, along with her classmate Hilde Tillman, D49, clinical professor emerita of public health and community service, at a ceremony at the dental school this Friday, Dec. 16. The Tufts dental community will celebrate Wilkins’ life and career during the event, and award the Dean’s Medal to her posthumously.

Also at the Dec. 16 event, Athena Papas, J67, the Dr. Erling Johansen, D49, Professor in Dental Research and the division head of oral medicine, will be officially recognized as a Distinguished Professor of the university.

The event will be held at 2 p.m. in Merritt Auditorium, 7th floor, Tufts School of Dental Medicine, One Kneeland Street, Boston campus, with a reception to follow in the alumni lounge on the 15th floor. RSVP is required by Dec. 14 to Anita Yen. Email her at anita.yen@tufts.edu or call her at 617-636-6721.

Sink Your Teeth Into These Facts About Fangs

Using Vapes May Set the Stage for Dental Decay