MEDFORD/SOMERVILLE (Dec. 22, 2016) – Female fireflies have long known that the best romances are with a male firefly who offers the most nourishing and largest “nuptial gift” – a protein-packed capsule of sperm that is rich with egg-producing and life-extending nutrients for the female.

However, the molecular composition of nuptial gifts has remained unknown even though the gifts offer benefits that keep a female firefly coming back for more.

Now, new research at Tufts University, in collaboration with MIT scientists, reveals the mystery of this special package, offers the first peek into the  content of firefly  gifts, and sheds new light on post-mating sexual selection. The findings were published today in Scientific Reports. 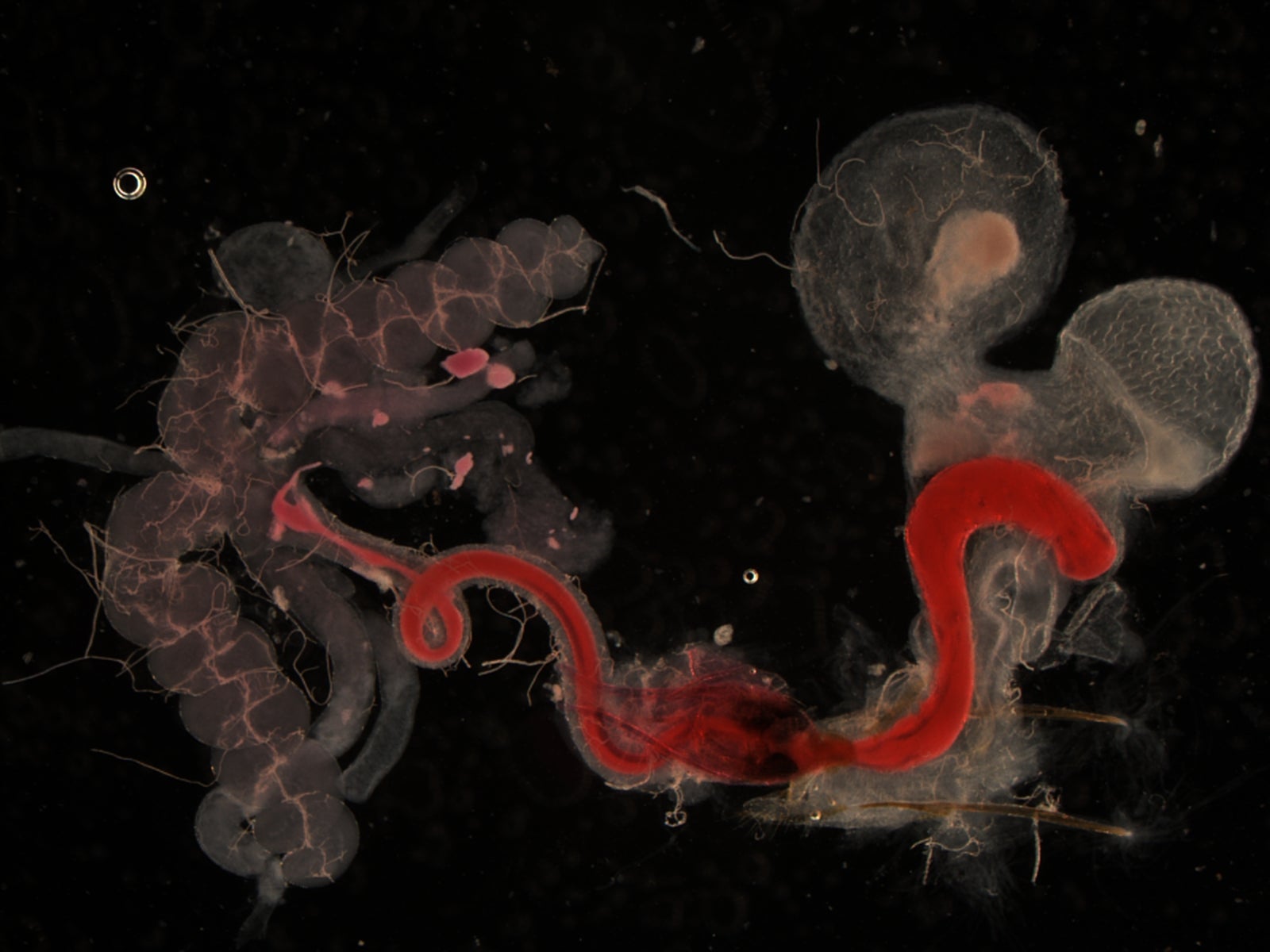 Firefly "nuptial gift" being passed from male (left) to female (right). Photo: Adam South
functions  can be inferred based on their resemblance to proteins known from other insects. Some are structural  proteins that make up  the fabric of the  nuptial gift, while others are enzymes that may help  unpackage the gift, allowing its contents to be released. Still  other enzymes appear to be a  biochemical way of nudging the female to lay more eggs. The researchers also identified enzymes that  might enhance a  male’s paternity success by  expediting sperm storage or by increasing the ability of male sperm to fertilize the female’s eggs.

Corresponding author Sara Lewis, Ph.D., professor of biology in the School of Arts and Sciences at Tufts University, said new technologies enabled the  research group to decipher exactly what’s  inside these amorous bundles. Among the new advances used were studies of gene expression within the  reproductive glands of male fireflies and proteomic analysis to identify specific proteins that  get transferred to females during mating.

“We found that firefly nuptial gifts are complex, elegant structures manufactured by a bevy of male glands,” said Nooria Al-Wathiqui, who earned her Ph.D. at Tufts in 2016 and is co-first author of the study. “In fact, if you look inside a male firefly, you’ll find them jam-packed with gift-making machinery.”

Although gene expression and proteomic studies give insight into gift protein composition, different approaches were needed to reveal other ingredients that might be contained within male gifts. So researchers conducted a high-resolution metabolomic exploration that found that firefly nuptial gifts also contain lucibufagin, a bitter-tasting toxin shown in previous work to protect firefly eggs and adults. Females might use these male-donated toxins to help defend themselves or their offspring against predators.

“We knew a lot about firefly courtship, but we were still in the dark about firefly sex,” said Lewis. “I think it’s safe to say that adult fireflies are obsessed with sex.” 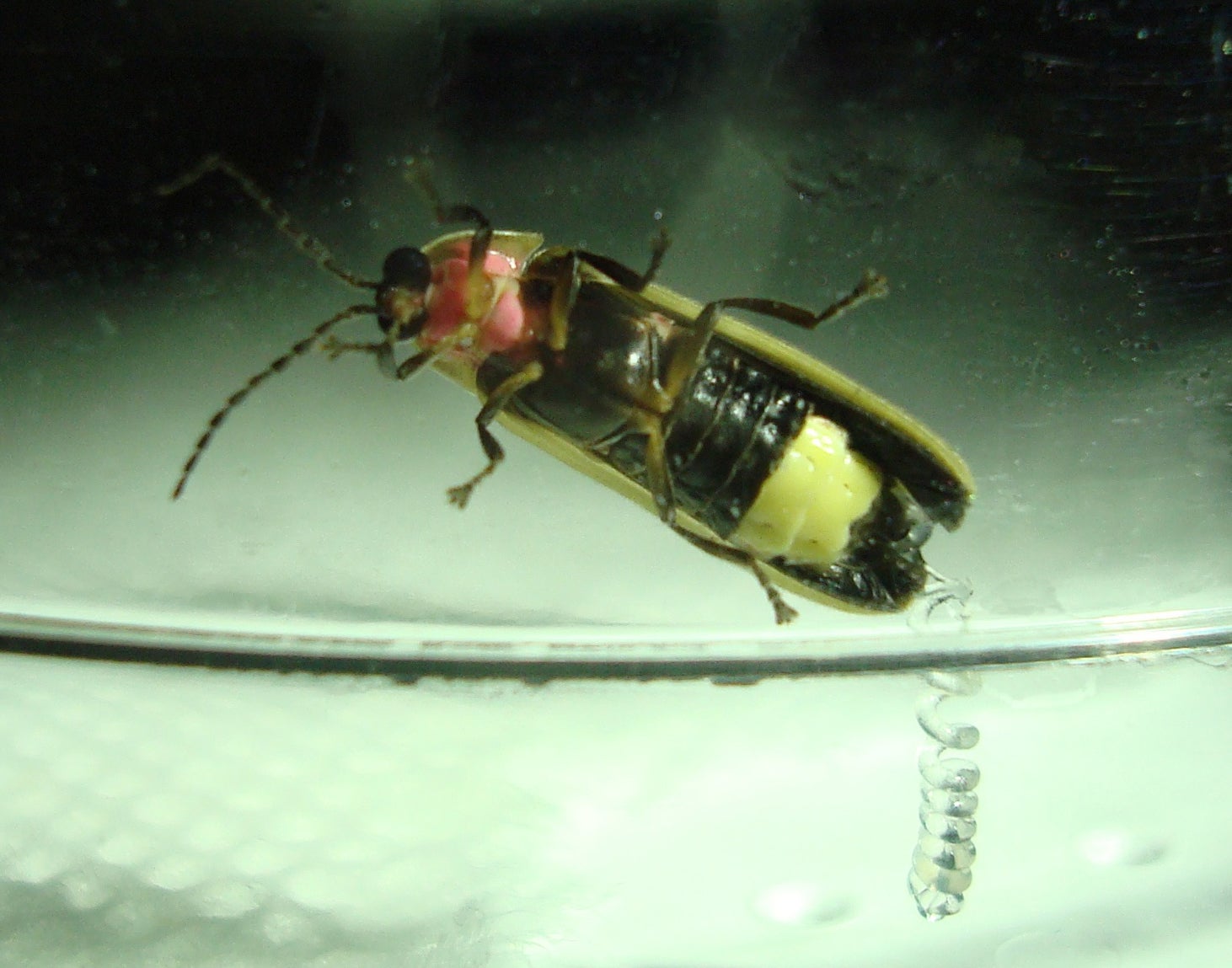 The Lewis Lab at Tufts has been researching firefly sex for more than two decades. The lab’s previous field and laboratory studies have shown that females choose their mates based on the timing of males’ bioluminescent courtship flashes and that firefly females mate with several different males across successive nights.

The lab also discovered that female fireflies benefit from male nuptial gifts with higher lifetime egg production and increased longevity, while also finding that males who provide larger gifts are able to sire more of the females’ offspring.

Deciphering what makes certain males more successful after mating has proven to be very challenging because post-mating events transpire within the hidden recesses of the female reproductive tract. Future studies will investigate the roles played by specific components of the male gift in promoting female egg production and improving male reproductive success. More studies also are needed to determine how the anti-predator toxins donated by male fireflies contribute to protecting females and their offspring.

“This study opens up so many exciting avenues for future sexual selection research in fireflies and in other gift-giving insects,” said Lewis who appeared in TED2014Talks.

In addition to Lewis and Al-Wathiqui, authors include: co-first author Timothy R. Fallon, a Ph.D. student at the Whitehead Institute for Biomedical  Research at Massachusetts Institute of Technology; co-corresponding author Jing-Ke Weng, a member of the Whitehead Institute for Biomedical  Research and associate professor of biology at Massachusetts Institute of Technology; and Adam South, who earned his Ph.D. at Tufts in 2012 and is currently a postdoctoral fellow in the Department of Immunology and Infectious Diseases, Harvard T.H. Chan School of Public Health at Harvard University.

This work was funded in part by Tufts University, the Beckman Young Investigator Program, Pew Scholars Program in the Biomedical Sciences, and the Searle Scholars Program.