Stem cell studies of the heart-valve disease in dogs could benefit humans, too 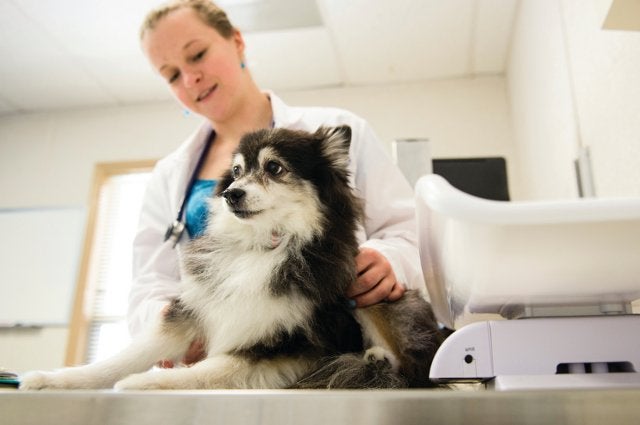 Patricia Galipeau was stunned to learn her dog, Mickey, was in congestive heart failure after his vet referred him to the Foster Hospital for a worsening heart murmur. “He’s always been so healthy,” she says of the 14-year-old Pomeranian-Shetland sheepdog cross.

Most dogs in heart failure have symptoms such as heavy coughing, shortness of breath and an unwillingness to exercise, says Vicky Yang, V09, the veterinary cardiologist who treated Mickey. The condition develops when aging heart valves become so thick that they can no longer keep blood from flowing backward, causing fluid to accumulate in the lungs and other organs.

“These dogs just can’t breathe,” says Yang, who is leading a pilot study to determine whether stem cell therapy might delay the progression of the disease. Such an advance would be significant, given there are no existing treatments to slow the decline beyond prohibitively expensive (up to $30,000) valve-repair surgery. To make dogs with heart-valve disease more comfortable, veterinarians usually administer increasing doses of diuretic drugs to help them eliminate built-up fluid through the urine to relieve their chest congestion. Every dog in heart failure is different, but most patients survive for about six to nine months after being diagnosed, Yang says.

A heart valve is made of collagen and elastin, both proteins, says Yang. In dogs that die of heart failure, these tissues are tough and bumpy, as though the elastic, floppy membrane has become calloused with long-term use. “It’s like a wound repair gone wrong,” Yang says. “We’re trying to figure out if we can modify that repair behavior and the progression to heart failure with stem cells.” Basically, the researchers hope to use these multipurpose fix-it cells to “help reboot the body for a better-controlled aging process,” she says.

Injecting stem cells into a dog’s bloodstream should allow them to travel to the heart, where they theoretically could promote regeneration of damaged valves. However, scientists still do not understand the full potential of stem cells to treat heart disease. Given those uncertainties, Yang says, the primary goal of her pilot study, with its small patient population, is to first ensure that the injections are safe.

The Tufts study also seeks to determine whether administering stem cells intravenously can improve cardiac function. The researchers will assess that with echocardiography, blood tests for cardiac biomarkers and an owner survey about their pets’ activities and quality of life.

For the double-blind study, 10 dogs with valve disease that had just experienced their first episode of heart failure were stabilized with the standard heart failure medications. Once the disease was controlled, Yang says, the dogs received three injections three weeks apart—five got the stem cells and five a placebo. They’ll return to the Foster Hospital for checkups every three months for a year.

Galipeau’s dog, Mickey, is participating in the study, but she doesn’t know whether he received stem cells or the placebo. “The biggest plus of Mickey being in the research program is that I know he’s being monitored closely,” she says. “I am a bit of a helicopter parent with this dog and would really be nervous if, for example, he started frequently coughing. But Dr. Yang is always only an email away.”

“The idea is not that the therapy is going to fix what’s already wrong with the heart valves,” Yang says, “but it may help keep the problem from getting worse and help dogs better respond to their medication.”

Similar stem cell therapies could someday help human heart patients. Heart-valve disease can require surgery to correct dangerously large leaks at the valve, Yang says. Finding a nonsurgical treatment would be a great option for human patients for whom valve-repair surgery is deemed too risky.

Funded by a significant grant from the Shipley Foundation, Cummings School veterinarians are also testing the effectiveness of stem cell therapies for a number of other conditions in dogs that don’t typically respond well to existing treatments in veterinary or human medicine, including arrhythmic heart disease in boxers, spinal disc herniation in little dogs that results in paralysis, Crohn’s disease, and the allergic skin disease atopic dermatitis.

Every year, millions of pets in the U.S. develop diseases that closely resemble those of their human counterparts. Clinical trials with sick pets can help us determine early on the feasibility, safety and effectiveness of treatments that would be too premature or too expensive to attempt in human patients, says Andrew Hoffman, director of Cummings School’s Regenerative Medicine Laboratory.

Hoffman is very much interested in the potential of studies performed in companion animals to advance both human and animal health. For a paper published in the April 12, 2016, issue of Stem Cells, he concluded that the goals and methods of veterinary studies are very applicable to human clinical trials and that stem cell therapies are safe and produced positive outcomes in all but two of the pet trials evaluated. He based his findings on a review of 19 stem cell studies in dogs and cats published between 2008 and 2015.

This story first appeared in the Fall 2016 issue of Cummings Veterinary Medicine magazine.