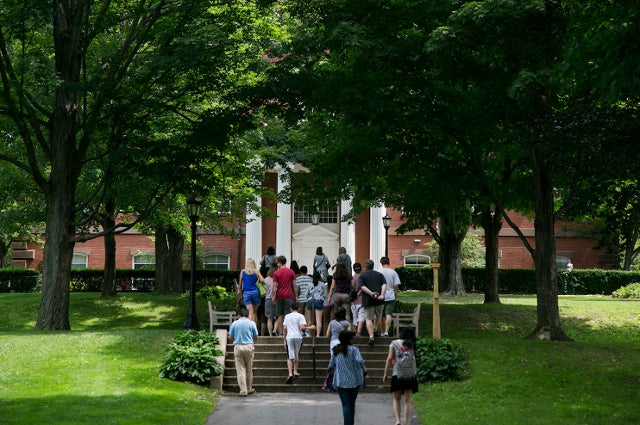 A record 21,057 high schoolers have applied for admission to this fall’s entering class in the schools of Arts and Sciences and Engineering at Tufts, a 4 percent increase over last year’s record pool of 20,223. There are expected to be an estimated 1,350 spots in the undergraduate Class of 2021.

The numbers continue an upward trajectory of students who want to come to Tufts—applications have risen 28 percent over the past five years, said Karen Richardson, dean of undergraduate admissions and enrollment management.

“The Common Application definitely makes it easier for students to apply to more schools,” she said. “But we’ve also continued to do the outreach that we’ve always done. We continue to have packed campus tours, good turnout for our on-campus open houses, and we try to have a finger on the pulse of what prospective students think and how they want information. We replaced our view book with the Jumbo magazine, for example—it’s more dynamic and current—and we are increasingly using social media to full advantage.”

This year a record 2,310 students applied early decision, up 11.5 percent over last year’s record high of 2,070. Early decision applications are reviewed in two rounds. The number of applications for the first deadline in early November was 16 percent higher than the previous year, suggesting that more students want to be here and nowhere else, Richardson said.

The second round of early decision applications, which were due Jan. 1, grew by 6 percent. Richardson expects that half of the Class of 2021 will come from the early decision pools.

The number of international students who seek a place at Tufts continues to rise sharply, up nearly 14 percent over last year. The most are from China; applications from that country jumped 25 percent this year. Students from 133 countries have applied for admission, up from 127 last year. New countries represented in this applicant pool include Cameroon, Somalia, Laos, Malawi, Nicaragua and Uruguay.

All 50 states are represented, with the most applications coming from Massachusetts, California and New York.

Now as dean of undergraduate admissions, she’s had opportunities to meet hundreds of teenagers going through the college application process. The students who gravitate toward Tufts, she said, tend to be “interested in getting to know other people and in learning outside the classroom as much as in the classroom.” And for that reason, she said, Tufts seems a good fit.

“We’re not cutthroat about grades—they’re important, but students don’t compare or compete. When I say that to a room full of high schoolers, you can see the relief on their faces,” she said. “That’s what attracted me to Tufts when I came to work here nine years ago, and I think it’s attractive to a lot of students who want to learn and grow in an open, friendly community.”