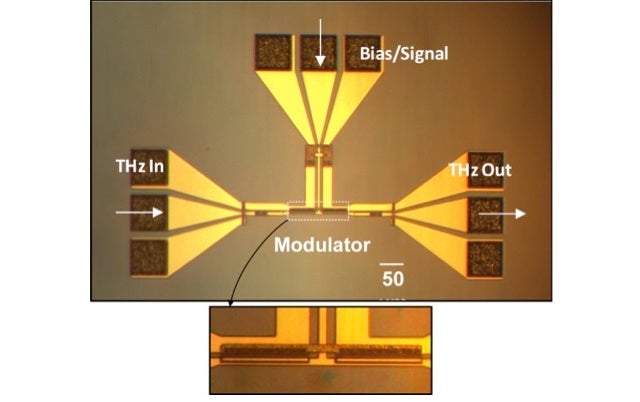 MEDFORD/SOMERVILLE, Mass. (January 19, 2017) – Tufts University engineers have invented a chip-sized, high-speed modulator that operates at terahertz (THz) frequencies and at room temperature at low voltages without consuming DC power. The discovery could help fill the “THz gap” that is limiting development of new and more powerful wireless devices that could transmit data at significantly higher speeds than currently possible.

Measurements show the modulation cutoff frequency of the new device exceeded 14 gigahertz and has the potential to work above 1 THz, according to a paper published online today in Scientific Reports. By contrast, cellular networks occupy bands that are much lower on the spectrum where the amount of data that can be transmitted is limited.

The device works through the interaction of confined THz waves in a novel slot waveguide with tunable, two-dimensional electron gas. The prototype device operated within the frequency band of 0.22-0.325 THz, which was chosen because it corresponded to available experimental facilities. The researchers say the device would work within other bands as well.

Although there is significant interest in using the THz band of the electromagnetic spectrum, which would enable the wireless transmission of data at speeds significantly faster than conventional technology, the band has been underutilized in part because of a lack of compact, on-chip components, such as modulators, transmitters, and receivers.

“This is a very promising device that can operate at terahertz frequencies, is miniaturized using mainstream semiconductor foundry, and is in the same form factor as current communication devices. It’s only one building block, but it could help to start filling the THz gap,” said Sameer Sonkusale, Ph.D., of Nano Lab, Department of Electrical and Computer Engineering, Tufts University, and the paper’s corresponding author.

About Tufts University’s School of Engineering

Located on Tufts' Medford/Somerville campus, the School of Engineering offers a rigorous engineering education in a unique environment that blends the intellectual and technological resources of a world-class research university with the strengths of a top-ranked liberal arts college. Close partnerships with Tufts' excellent undergraduate, graduate and professional schools, coupled with a long tradition of collaboration, provide a strong platform for interdisciplinary education and scholarship. The School of Engineering’s mission is to educate engineers committed to the innovative and ethical application of science and technology in addressing the most pressing societal needs, to develop and nurture twenty-first century leadership qualities in its students, faculty, and alumni, and to create and disseminate transformational new knowledge and technologies that further the well-being and sustainability of society in such cross-cutting areas as human health, environmental sustainability, alternative energy, and the human-technology interface.