Diets rich in fruits and vegetables have been linked to a lower risk of lung cancer, and a red pigment in red peppers and oranges could be one reason 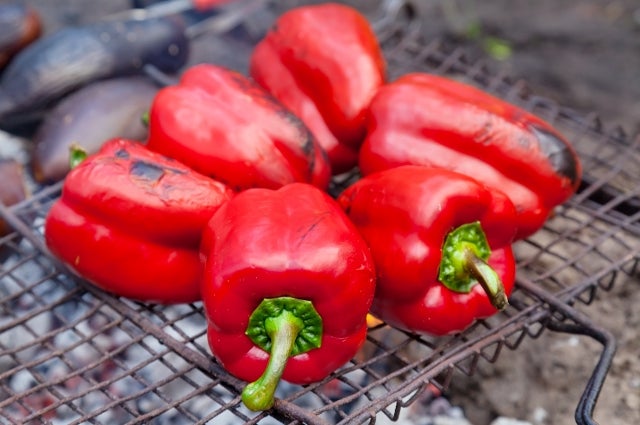 Xiang-Dong Wang, a cancer researcher at Tufts, has spent a long time trying to figure out why carotenoids, the main pigments providing colors that range from yellow and pink to deep orange and red in most fruits and vegetables, seem to keep chronic diseases at bay. When a 2004 study by other researchers showed that eating foods containing beta-cryptoxanthin (BCX)—a red pigment abundant in sweet red peppers, paprika, winter and butternut squash, oranges. and tangerines, among other foods—was associated with a lower risk of lung cancer in people who smoke, he made BCX a focus of his research.

Since then, Wang and his colleagues have been studying how the pigment might work at the molecular level to thwart lung cancer. In their latest study looking at mice and cell models of human lung cancer, published in Cancer Prevention Research, they found that BCX appears to counteract one of the lesser-known abilities of nicotine, which is to accelerate the growth of lung tumors.

Lung cancer continues to be the leading cause of cancer death in the United States, and smoking continues to be the leading cause of lung cancer. “For smokers, tobacco product users or individuals at higher risk for tobacco smoke exposure, our results provide experimental evidence that eating foods high in BCX may have a beneficial effect on lung cancer risk, as suggested by previous epidemiological studies,” said Wang, N92, a senior scientist and director of the Nutrition and Cancer Biology Laboratory at the Jean Mayer USDA Human Nutrition Research Center on Aging at Tufts. This better understanding of BCX’s molecular mechanism could lead to dietary recommendations for patients undergoing chemotherapy for lung cancer and for those who have survived, said Wang, who is also a professor at the Friedman School.

The Tufts study suggests that BCX and nicotine have opposite effects in lung cells. Nicotine binds to a specific receptor on the surface of lung cells. This binding triggers many biochemical signaling events that cause cells to proliferate and new blood vessels to develop, two hallmarks of cancer. Nicotine also boosts the cells’ production of this specific receptor. With large numbers of those receptors available for nicotine to bind to, lung cancer cells in smokers get an even stronger signal to keep growing.

Wang and his team demonstrated that BCX causes cells to decrease the amount of that specific nicotine receptor on their surfaces, which may dampen cell growth. When the researchers administered daily doses of BCX to mice before and after they injected the rodents with a nicotine-derived carcinogen, they found that the mice treated with BCX had fewer lung tumors than those that got no BCX.

The inhibition of the receptor by BCX may also play a role in keeping cancer from spreading. Malignant cells’ ability to move freely about the body is a key requirement for them to metastasize. Wang’s team discovered that if human lung cancer cells in a lab dish in the presence of the receptor were treated with BCX, they migrated less than untreated ones. In addition, previous studies done in Wang’s lab suggest that BCX, through a different molecular mechanism, can slow the nicotine-promoted growth of lung tumors and decrease cigarette smoke-induced lung inflammation in animal models.

It’s the first time nicotine receptors on the surface of lung cells have been linked to BCX, according to Srikumar Chellappan, a cancer biologist at the H. Lee Moffitt Cancer Center & Research Institute in Tampa, Florida. More research is needed to fully understand how BCX slows lung cell production of nicotine receptors, Chellappan said. “A significant amount of molecular studies would be needed to understand how this agent functions in chemoprevention,” he noted.

In Wang’s experiments, the BCX dose that seemed to have the greatest benefit in mice was equivalent to a daily human dose of about 870 micrograms—the amount contained in one sweet red pepper or a couple of tangerines a day, he said.

He emphasized that eating whole fruits and vegetables, which include other antioxidants and nutrients that can have additive or complementary effects, is better than taking dietary supplements. Several clinical trials over the years have tested various single-nutrient supplements for cancer prevention. Not only did they fail to show any benefit, but some even caused more people to get cancer, he said.

Still, there’s no hard evidence to demonstrate that foods containing BCX can prevent lung cancer in people. To gather such data, Wang plans to study the effects of BCX-containing foods in people, particularly smokers with and without lung cancer.