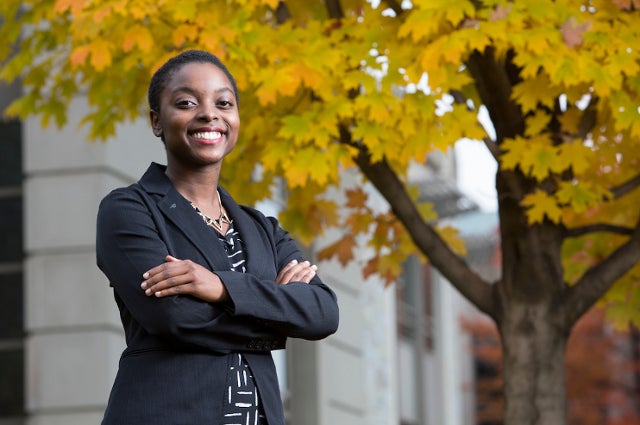 Last summer, Cayla Brown, A17, developed a network of resources to help court-involved youth—those involved within the juvenile justice system—transform their lives for the better. Brown, a senior who’s majoring in international relations with a minor in Arabic studies, was the only undergraduate student intern at the Youth Advocacy Division of the Massachusetts Public Defender Agency, which ensures that children from indigent families are represented fairly in the state court system. Most internships there go to law students or grad students in social work.

She worked with a state social worker to research intervention programs, such as ROCA, More Than Words and Artists for Humanity, to engage youth who were on probation or whose cases were closed, to keep them from becoming repeat offenders and help them become active members of their communities. Now she is getting ready to take the LSAT, so she can become a public defender like the ones who inspired her.

Brown’s internship—like many summer career explorations—was unpaid. She worried that she would have to take on another job to afford her rent and living expenses. But thanks to the Bruce-Griffey Leadership and Diversity Internship Fund, which is supported by the Bruce-Griffey Leadership and Diversity Internship Committee, the Tufts Alumni Association, the Tufts Black Alumni Association (TBAA), the Tufts Career Center and the Africana Center, she received a stipend that covered those costs. When she found out she had received the award, she cried.

“I cannot stress how thankful I am for this grant,” Brown said. “Not having monetary pressure, I was able to really dive into the job. Every day, the situation of the child is changing, so if I was only there half the time, I couldn’t have done much to help the clients.”

The Bruce-Griffey Leadership and Diversity Internship Fund was established this year to support current Tufts students who are leaders on campus and have demonstrated a commitment to public service. Brown, who sits on the Africana Advisory Alliance, and Andrade Hendricks, E17, a member of the Tufts Synthetic Biology Team and the Society of Latinx Engineers and Students, were the first recipients.

Hendricks, a senior majoring in chemical engineering, worked last summer for microbiologist Mehmet Berkmen at New England Biolabs in Ipswich, Massachusetts. The lab offers a paid summer internship, but it was already filled when she applied. She was told she could join the lab if she found her own funding, and she is thankful that the Bruce-Griffey Leadership and Diversity Internship Award allowed her to take advantage of the opportunity. After graduating next spring, she hopes to continue working with New England Biolabs, which develops products for the life sciences industry, while deciding whether to pursue a graduate degree.

The Bruce-Griffey Leadership and Diversity Internship Fund was established to honor Lena Bruce, E92, and Anita Griffey, J90, both sisters of Delta Sigma Theta, a historically African-American sorority dedicated to community service. The women died within two years of each other in the early ’90s, and their sorority sisters, Tufts classmates, and fellow alumni, friends and loved ones wanted to recognize their good works.

“It’s important to remember these women because both were incredible leaders on campus and actively involved in various community service projects around Tufts and the greater Boston area,” said Andrea Nelson Meigs, J90, a Delta Sigma Theta sorority sister. “If these women were alive today, I have no doubt we would be reading about them as leaders. I can see Anita being like civil rights activist Dorothy I. Height for the current generation, and Lena being the equivalent in the engineering field.” 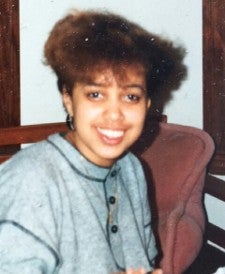 Anita Griffey, J90
Griffey came to Tufts as a second-semester transfer student from Atlanta. The primary breadwinner for her family, she was also among the first in her family to attend college. She had deferred enrollment in the fall so she could earn money to afford tuition. She was a financial aid student who continued to work full-time during her first semester to help pay for her education. The president of Tufts’ African American Society and an officer with the student chapter of the NAACP, she had accepted a position with Traveler’s Insurance Co. after graduation and was planning to use her salary to take care of her mother, who suffered from schizophrenia. Then, just a month shy of graduation, she died in a car crash.

“The day she passed away, Anita was going to the store [to buy materials] to make someone a pillow with sorority symbols on it,” said Nelson Meigs. “It is a real testament to who she was that she died doing something for someone else.” 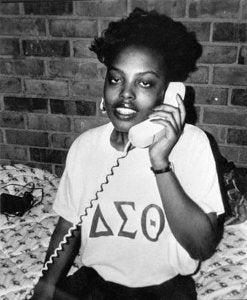 Lena Bruce, E92
Bruce, a younger sorority sister to Griffey and Nelson Meigs, grew up in Philadelphia, where—following in her mother’s footsteps—she was a community activist. In Boston, she mentored at-risk youth. She was also the only African-American woman in her electrical engineering class. After graduating with honors, she began working at the engineering firm Stone & Webster. Then in July 1992, she was tragically murdered in her Boston apartment by an unknown intruder. The case remained unsolved for nearly two decades until a suspect was indicted in October 2015.

Francesca Freeman-Lujan, J93, who lived in Capen House with Griffey and was Bruce’s little sister in Delta Sigma Theta, took a semester off after Bruce’s death because she was so devastated by the loss. Upon returning to campus, she founded Lena Bruce Day and established a scholarship fund in Bruce’s memory.

On May 5, 1993, 48 members of Lena’s family chartered a bus from Philadelphia to attend Lena Bruce Day at Tufts. Festivities included a speech by actress Ruby Dee, a dinner cooked by the Bruce family, the dedication of a bench in Bruce’s honor, the placement of plaques around campus her in memory, and more.

Nearly 25 years later, Bruce’s bench remains outside the Africana Center, and a memorial bench for Griffey sits outside the Olin Center. Over the years, the Africana Center and the TBAA have kept the memory of Griffey and Bruce alive by sharing their stories with students. But the initial scholarship fund was not permanent, so fundraising for it fell by the wayside.

Then in the spring of 2015, a DNA match revived Bruce’s cold case, and her assailant was charged with first-degree murder. The trial reopened old wounds for her friends and loved ones. With the revival of Bruce’s case, Freeman-Lujan reached out to her big sorority sister, Leslie Keyes, J90. Keyes had also lived in Capen House, and she and Griffey served as officers for the Tufts chapter of the NAACP. She was one of the last people to see Griffey before the crash that took her life. She also served as a big sister to Bruce.

The two were determined to channel their pain into something good, so they considered reestablishing a scholarship in Bruce and Griffey’s honor. “We wanted to pay tribute to these strong women by helping a current Tufts student who exemplified the same characteristics as Anita and Lena,” said Keyes.

To pursue their goal, Freeman-Lujan and Keyes, with the assistance of Kimber Smith, J99, started conversations with members of the Tufts Alumni Association, TBAA, university fundraisers and Katrina Moore, director of the Africana Center. When Freeman-Lujan suggested an internship support fund, Moore, who had been working closely with the TBAA to honor Bruce and Griffey’s memories since she arrived at Tufts eight years earlier, agreed that it was ideal, because the money raised could be put to immediate use, unlike an scholarship fund, which would require more long-term fundraising.

“Internship opportunities are hard to come by, unless you have a special connection, and most are unpaid,” Moore said. An internship support fund provides “a great opportunity for students to do things they are passionate about.” Because Griffey and Bruce were so involved with giving back to African-American communities, it seemed fitting to establish a fund to promote leadership and diversity.

“We thought that would be perfect, because Lena and Anita were struck down at the point at which they had contributed to making Tufts a better place, and were ready to change the world,” Keyes said. “An internship fund gives students the freedom to pick an internship that will be the first step for them to achieve greatness beyond campus without having to worry about bills.”

“I really believe that both Lena and Anita would have done this work had they continued to live,” said Freeman-Lujan.

As an educator, Freeman-Lujan has witnessed the difficulty students have in finding work without prior experience. While at Tufts, she landed a paid casting internship on Spike Lee’s Jungle Fever. “Working for Spike Lee, one of the most important filmmakers of my generation, launched my career and impacted my life in a positive way,” she said. “It was really important for me to give back and enable others to have those kinds of experiences.”

Freeman-Lujan and Keyes invited Nelson Meigs and a handful of other alumni, classmates and sorority sisters to join the effort. Along with the president of the TBAA, they formed the Bruce-Griffey Leadership and Diversity Internship Committee. For their inaugural fundraising year, they set an initial goal of $3,500. With the support of the more than 100 alumni, family and friends, they raised more than $10,000—more than enough to fully fund two stipends for summer 2016, with a remainder to go toward 2017. Fundraising to expand the fund and support a cohort of students for the summer of 2017 is underway.

Diversity in the Workplace

Moore believes that by helping to advance young people of color, the internship fund addresses a critical need. “We have the moral imperative to help develop as many leadership skills as we can while students are here to solve major issues we are faced with every day,” she said.

“It’s so necessary to have people from different backgrounds in the workplace,” said Brown, adding that it was especially important in her case, since she interned at an agency that defended people of color, and she was the only intern of color. “When you have those different voices, it keeps people from being marginalized or silenced.”

“Diversity is important,” Hendricks said. “Being able to see someone like yourself in a company makes it so much more attainable. Even if you don’t follow in their footsteps exactly, it’s much easier to have a vision for your dream.”

“These are baby steps for us,” said Keyes. “Eventually, we want to set up an endowed scholarship that can support multiple students each year and will stand as a testament of time to help students achieve in the name of Tufts, for themselves and the community.”

You can support future Bruce-Griffey interns by making a gift today at go.tufts.edu/brucegriffey.