We all need to repair the breach in relationships that the election exposed, Rev. Jennifer Bailey, A09, told crowd at MLK Symposium 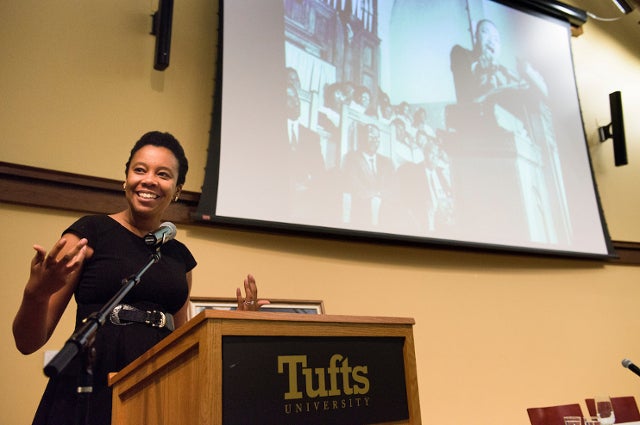 On election night, Jennifer Bailey, A09, collapsed in tears on her kitchen floor. As it became clear that Donald Trump would be the next president, Bailey believed the apocalypse had arrived, she told a large audience at Tufts’ Martin Luther King Jr. Symposium on Jan. 23.

“The 2016 presidential cycle uncovered and left exposed the rupture in the very heart of our democracy,” said Bailey, who, as the founder and executive director of the Faith Matters Network, has emerged as a national leader in the multifaith movement for social justice. “It is a rupture rooted in the deep paralysis of anxiety and disparate visions of our collective future,” she said.

But as she rocked back and forth on her kitchen floor on Nov. 8, repeating the words “I don’t feel safe,” she said she heard the voice of her mother, who died in May: “Baby, we ain’t never been safe.”

Those words were a wake-up call, she said, a reminder that today’s challenges are not a product of the 2016 presidential election, but the latest chapter in a centuries-old struggle for justice and democracy.

Looking back on those who rose to face the challenges of their day, Bailey thought about the question Martin Luther King Jr. asked in 1967, when he condemned America’s involvement in the Vietnam War: “Where do we go from here?”

To frame the answer, Bailey, an ordained minister in the African Methodist Episcopal (AME) Church, led the audience three times in a chant prominent in the Black Lives Matter movement: “It is our duty to fight for our freedom. It is our duty to win. We must love and support each other. We have nothing to lose but our chains.” Their collective voices grew louder with each repetition.

“What ails the nation cannot be solved by politics—it can only be solved by strengthening our relationships with one another,” said Bailey, who was named one of the Center for American Progress’s 15 Faith Leaders to Watch in 2015; as an undergraduate, she participated in the leadership development program Tisch Scholars for Civic Life. “This will require the courage of everyday heroes to dig deep and find within ourselves the wherewithal to lean into one another and repair the breach in relationships that this election has exposed.”

Too often we see people only as blips in a Facebook feed, as beings “over there,” Bailey said. To counter the impersonal of the virtual, she urged the audience to reach out to those who are not like themselves, to ask deep questions of those with whom they disagree, to share their own views honestly, and to have the courage to abide with the tensions that arise. “We need to establish and thicken these relationships to withstand the conflict that will certainly come.”

Sometimes this means respecting someone else’s experience, Bailey said—and sometimes it means refusing to give way. She gave an example from the Women’s March in Nashville last weekend, when a man told protestors they were going to hell. Bailey turned around, and although she continued to answer him calmly when he spoke to her, she used the sign she was holding to block him.

“There are times when you need to stand your ground. Not shouting, not being loud, just standing,” Bailey said. “And that act of standing can be revolutionary in and of itself.”

Things may look grim, but that means change is on the horizon, Bailey said, and history has shown us that to build something better, each new generation must first destroy what is broken.

And as the Christian tradition teaches, death contains the possibility of new life, Bailey said. “What if the darkness we’re experiencing is not a tomb, but a womb—an opportunity to birth a new vision for what America can be?” suggested Bailey.

She ended her talk with a challenge, asking each member of the audience to think hard about whether they will add to the chaos of the moment, or do the “messy, sticky, complicated work” of building community.

“Creating not safe spaces, but brave spaces, holding space not just for self-care, but for communal care, for conversation,” Bailey said. “That’s what’s going to get us through the next four to eight years.”