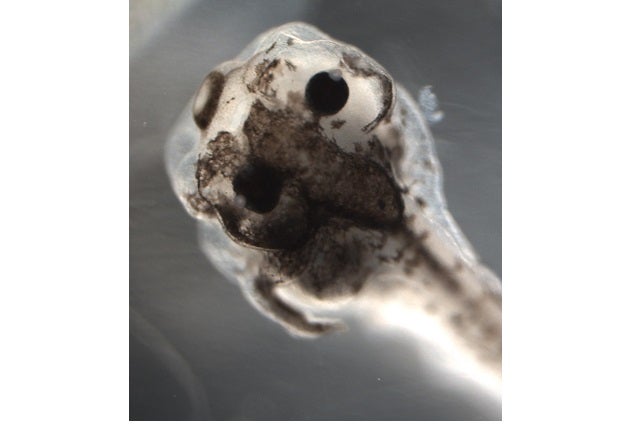 MEDFORD/SOMERVILLE, Mass. (Jan. 27, 2017) – Scientists from Tufts University's School of Arts and Sciences, the Allen Discovery Center at Tufts, and the University of Maryland, Baltimore County have used artificial intelligence to gain insight into the biophysics of cancer. Their machine-learning platform predicted a trio of reagents that was able to generate a never-before-seen cancer-like phenotype in tadpoles.  The research, reported in Scientific Reports on January 27, shows how artificial intelligence (AI) can help human researchers in fields such as oncology and regenerative medicine control complex biological systems to reach new and previously unachievable outcomes.

The researchers had previously shown that pigment cells (melanocytes) in developing frogs could be converted to a cancer-like, metastatic form by disrupting their normal bioelectric and serotonergic signaling and had used AI to reverse-engineer a model that explained this complex process.  However, during these extensive experiments, the biologists observed something remarkable:  All the melanocytes in a single frog larva either converted to the cancer-like form or remained completely normal. Conversion of only some of the pigment cells in a single tadpole was never seen; how, the researchers asked, could such an all-or-none coordination of cells across the tadpole body be explained and controlled?

In the new study, the researchers asked their AI-derived model to answer the question of how to achieve partial melanocyte conversion within the same animal using one or more interventions.

"We wanted to see if we could break  the concordance among cells, which would help us  understand how cells make group decisions and determine complex body-wide outcomes," said the paper's corresponding author, Michael Levin, Ph.D., Vannevar Bush professor of biology and director of the Allen Discovery Center at Tufts and the Tufts Center for Regenerative and Developmental Biology.

The AI model ultimately predicted that a precise combination of three reagents (altanserin, a 5HTR2 inhibitor; reserpine, a VMAT inhibitor, and VP16-XlCreb1, mRNA encoding constitutively active CREB) would achieve that outcome. When this pharmaceutical cocktail was used in vivo on real tadpoles, the result was, in fact, conversion of melanocytes in some regions but not others within individual frog larvae—something never before seen.

"Our system predicted a three-component treatment, which we'd never have come up with on our own, that achieved the exact outcome we wanted, and which we hadn't seen before in years of diverse experiments. Such approaches are a key step for regenerative medicine, where a major obstacle is the fact that it is usually very hard to know how to manipulate the complex networks discovered by bioinformatics and wet lab experiments in such a way as to reach a desired therapeutic outcome," said Levin.

He added, "Much of biomedicine boils down to this: We have a complex biological system, and a ton of data on what various perturbations have been seen to do to it. Now we want to do something different--cure a disease, control cell behavior, regenerate tissue. For almost any problem where a lot of data are available, we can use this model-discovery platform to find a model and then interrogate it to see what we have to do to achieve result X."

For the new research, the system used the AI-discovered model to run 576 virtual experiments, each computationally simulating 100 times the development of an embryo under a different novel combination of drugs; 575 failed to yield the hoped for result. But one precise combination of three drugs was the proverbial needle in the experimental haystack, predicting partial melanocyte conversion.

"Even with the full model describing the exact mechanism that controls the system, a human scientist alone would not have been able to find the exact combination of drugs that would result in the desired outcome.  This provides proof-of-concept of how an artificial intelligence system can help us find the exact interventions necessary to obtain a specific result," said the paper's first author, Daniel Lobo, Ph.D., formerly of the Levin laboratory and now assistant professor of biology and computer science at the University of Maryland, Baltimore County.

Joining Levin and Lobo in authoring the paper was Maria Lobikin, Ph.D., formerly of the Levin laboratory and now a scientist at Homology Medicines Inc.

The computer model predicted the percentage of tadpoles that would retain completely normal melanocytes within 1 percent of the in vivo results while aggregating the percentage of tadpoles that showed partial or total conversion in vivo.  Plans for future research include extending the platform to incorporate time-series data that will enable even more accurate comparisons between computer and in vivo models.

Researchers also hope to extend the approach to other aspects of regenerative medicine by discovering interventions that help reprogram tumors, kick start regeneration and control stem cell dynamics.  Levin noted that taming physiological networks like the one responsible for melanocyte conversion will require increasingly complex computational and mathematical modeling techniques and data representation, as well as new laboratory techniques in order to increase the ability to quantify information in vivo, especially in human patients.