The Connection Between Wheat and Bone Loss 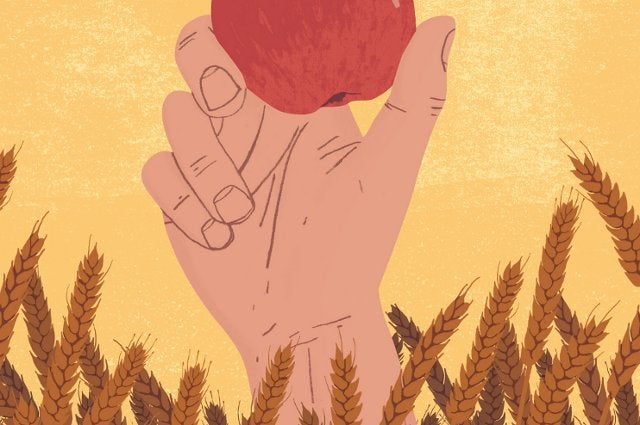 Stroll through your local grocery store, and you’ll immediately notice America’s love affair with grain. Entire aisles are devoted to breakfast cereals, bread, rolls, crackers and cookies. According to the U.S. Department of Agriculture, the amount of grain most Americans consume has grown by nearly 40 percent since the 1970s, adding up to 500 extra calories to our diets each day.

That increase may have an insidious effect on the body. According to Bess Dawson-Hughes, M75, it may be linked to bone loss late in life.

Dawson-Hughes is the director of the Bone Metabolism Laboratory at the Jean Mayer USDA Human Nutrition Research Center on Aging at Tufts. She says that most humans reach their maximum bone density by age 25—but after that, things tend to go downhill, especially in middle age. Most men lose about 1 percent of their bone mass annually after age 50, and women lose even more.

“At menopause, women lose roughly 3 percent of their bone mass annually for about five to eight years,” she says. That means more than 20 percent of the body’s total bone density can disappear in less than a decade, leading to osteoporosis, painful fractures and a diminished quality of life.

Losing a certain amount of bone density is a normal part of aging, Dawson-Hughes notes, but the exact mechanism behind that bone loss is still unclear. She thinks it may have something to do with the way the body metabolizes all those cereals we’re eating.

Because grains contain sulfur compounds, they break down into byproducts like sulfuric acid, which in turn leads to an increase in the body’s overall acidity. Although that sounds awfully dramatic on paper, the actual change in blood pH is thankfully minute—on the order of a few tenths of 1 percent—yet even this tiny change may trigger bone loss.

Dawson-Hughes says that some of this loss is caused by a chemical breakdown that happens when bone touches acidic blood. The rest, however, may be due to a specific defensive mechanism.

“As the pH goes down in the blood just a little bit, that activates a specific receptor in bone, creating a chain of events that results in bone resorption,” she says. “It signals bone to break down, which dumps alkali into the circulation, neutralizing the acid. It’s a defensive response—our bodies are basically defending against a dropping pH.”

Ideally, this defense mechanism should keep our acid-base levels more or less in balance. With high-grain diets continually adding more acid into our bodies, however, this system may kick into overdrive to compensate, leading to accelerated bone loss.

The outlook for bone health isn’t all doom and gloom, fortunately. In 2015, Dawson-Hughes and her team found that certain dietary supplements may counteract the effects of acid on bone. Their study, published in the Journal of Bone and Mineral Research, involved 244 women and men over age 50. Half were given daily supplements of potassium bicarbonate (a potent alkali), the rest a placebo.

Over the course of three months, the researchers took urine samples and measured the overall amounts of calcium they contained. High levels of calcium, she says, showed that the body was actively breaking down bone in order to counteract acid levels in the blood.

After three months, the team found that participants who had taken the supplements showed significantly lower calcium levels in their urine, a sign of less bone breakdown. In other words, Dawson-Hughes says, the study suggests that adding alkali like potassium bicarbonate into the body can curb bone loss by counteracting acids—at least, in theory.

“That’s still controversial,” says Connie Weaver, a nutrition researcher at Purdue University, and a former board member of the National Osteoporosis Foundation. “I would say the evidence is pretty convincing that diet patterns do influence bone health, but not all scientists agree on exactly how.”

Instead of being linked directly to the pH of our blood, changes in bone density could be related to other compounds in our food that have yet to be studied. Likewise, changes in blood pH, Weaver reasons, might also be a side effect of high protein diets—which can metabolize to acid as well—or some other nutrition mechanism that’s changing our bones. “Diet is complex,” she says. “I wouldn’t be surprised if in the future we find that acid-base plays a role in bone health, but I think it’s unlikely that it’s the only thing that has an effect.”

Still, Weaver says, that doesn’t diminish the fact that a good diet is essential for bone health, a sentiment that Dawson-Hughes wholeheartedly supports. “Supplements are terrific for research purposes, because you can control the dose, but they’re not a real solution,” Dawson-Hughes says. “Most people with a dietary imbalance will need six to eight bicarbonate pills a day to achieve a neutral pH range, so it’s hard to see how that would be sustainable over the long term.”

Like all things in nutrition, it’s not quite as simple as just eating a “balanced diet,” however. According to Weaver, increasing consumption of fruits and vegetables overall is a step in the right direction, but does not pinpoint the exact foods that could be most beneficial for bone health. Instead, prioritizing specific fruits and vegetables over others might be needed to get those health benefits.

This sort of diet intervention is something Dawson-Hughes wants to study next. “Once you define the parameters needed for bone health, the next step—and one we hope to take—is to test a diet intervention designed to bring the net acid in the body to neutral. If you knew that, you’d be on solid footing to make health-appropriate policy choices.”

David Levin is a freelance science writer in Boston.

This article first appeared in the Summer 2016 issue of Tufts Nutrition.

Is Vitamin K the Secret Key to Bone Strength?

The Long View on Nutrition and Aging

The Truth about the War on Wheat