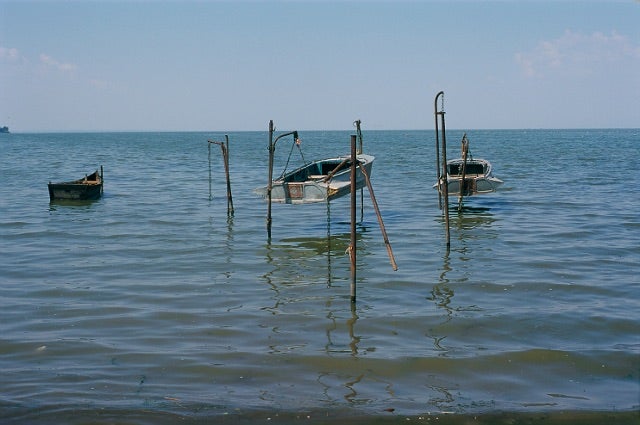 Artists have romanticized the sea for centuries. Drawn to its beauty, fluidity and vast unexplored territory, they traditionally create expressions of awe-inspiring nature, often juxtaposed with mankind’s fragile existence.

Not so in the exhibition The Ocean After Nature. On display through March 18 at the Grossman Gallery and Anderson Auditorium of the School of the Museum of Fine Arts (SMFA) at Tufts in Boston, the show “examines how the seascape is shaped in an era when human beings have become the driving force in the development of the planet,” said curator Alaina Claire Feldman. 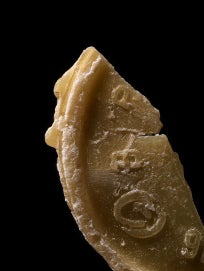 Evelyn Rydz, Floating Artifact #12, 2014 to present. Pigmented Ink print. Courtesy of the artist and Miller Yezerski Gallery
The exhibition, a traveling show produced by Independent Curators International (ICI), is the first cross-coordinated installation between Tufts and the SMFA in Boston, which became part of the university’s School of Arts and Sciences last summer. A companion exhibition, Evelyn Rydz: Floating Artifacts, runs concurrently at the Tufts University Art Gallery in the Aidekman Arts Center’s Tisch Family Gallery on the Medford/Somerville campus.

Through painting, sculpture, photography, film, music and other media, the 20-plus artists in The Oceans After Nature explore 21st-century perceptions of the ocean in terms of “such interrelated and chaotic systems of power as land-sea divides, the circulation of people and goods, physical and psychological displacement, utopian mythologies, and the vulnerabilities of our ecosystem,” Feldman said.

The companion show on the Medford/Somerville campus lets viewers dive more deeply into the ICI show’s themes through a “Think/Make Space.” It’s a workbench where they can investigate specimens related to larger-than-life portraits of washed-ashore debris displayed around them and then record their findings. Together gallery-goers create “an ongoing collaborative narrative exploring the interconnected histories of these lost and discarded objects and ocean currents around the globe,” Rydz wrote in the exhibition guidebook.

Lisa Lowe, a Distinguished Professor in the English department and director of the Center for Humanities at Tufts (CHAT), worked with guest curator Carol Stakenas, who planned the ICI show’s collaborations with Tufts. The result of their efforts was an academic component that draws upon the themes of the Mellon Sawyer Seminar in Comparative Global Humanities that Lowe is co-convening at CHAT this year. 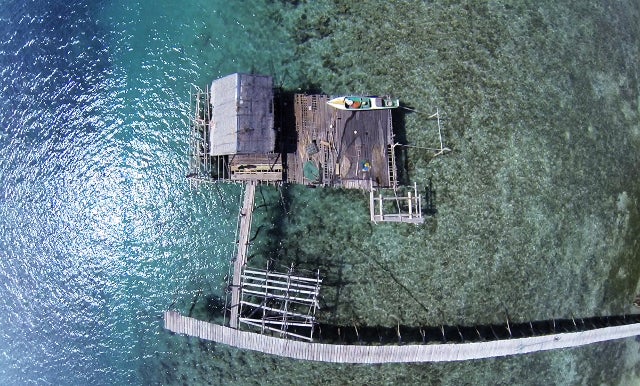 Manny Montelibano, film still from A Dashed State, 2015. Courtesy of the artist.
In a panel discussion titled “Bodies of Water, Bodies of Knowledge,” four scholars, including several Mellon Sawyer fellows, will discuss their research as it relates to the show on Feb. 23 at 6 p.m. at the SMFA at Tufts’ Anderson Auditorium, 230 The Fenway, Boston. The Mellon Sawyer fellows are conducting research related to the Atlantic, Pacific and Indian oceans and the Mediterranean Sea. “It was complete serendipity,” Lowe said. “We had this in the works for several years, and when SMFA Dean Nancy Bauer learned of the ICI exhibit, she thought of our project.”

The Ocean After Nature and its companion exhibition will especially appeal to those “working in the sciences and the humanities and general viewers interested in seeing how artists are responding to the ocean and ecological change in a variety of nontraditional ways,” said John Ohrenberger, the SMFA’s coordinator of exhibitions and public programming.

Even before entering the SMFA at Tufts gallery space in the Fenway, viewers are confronted with a map of the world they are unlikely to have seen before. Yonatan Cohen and Rafi Segal, Israeli artists working at MIT, have assembled a “Territorial Map of the World” based on how international law treats national oceanic boundaries. Often overlapping, familiar continental forms bloat out beyond recognition for miles into the sea.

“When you look at the map it becomes very confusing, because the viewer is made aware of relationships and interactions between states that we don’t usually consider,” Ohrenberger said. “Throughout the show, artists are using visual techniques, especially dealing with space and mapping, as well as more ephemeral media like sound and video, in order to complicate our traditional location in these global exchanges.”

The environmental impact of the map is sharply felt in the science-fiction video essay Subatlantic, by Swiss artist Ursula Biemann. The story unfolds across submerged areas of the Atlantic and focuses on the Holocene epoch, a climatic phase that began about 12,500 years ago and continues today. While this climatic change has been millennia in the making, the viewer is transfixed by the crystalline depictions of melting Arctic ice, the slowing of ocean streams and the mass release of materials trapped from pre-human times under the Arctic ice mass. Considering the speed of present-day climate change, one’s imagination can hardly help fast-forwarding the action to envision cataclysm. 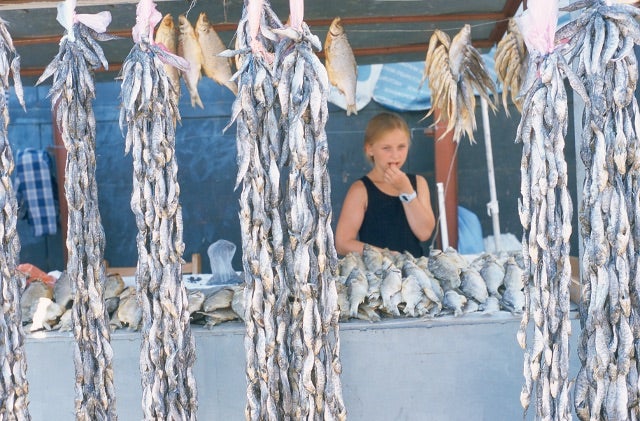 Ulrike Ottinger, Fischmarkt, die Frauen von Odessa, Context: Southeast Passage. The Ukraine, color, 2000.
An even more urgent tale unfolds in the ghost story Atlantiques. This video, by Parisian filmmaker Mati Diop, follows a young man’s treacherous ocean migration from Senegal to Spain aboard an overcrowded pirogue, as gravesite images reveal that he drowned during his voyage. All the while, cries of seabirds, waves slapping upon hulls and shorelines, seaport vendors calling out their wares, and the din of dockworkers operating heavy machinery swirl around the gallery space. Viewers move among these competing soundtracks from slideshow to video, painting to photograph.

A pair of 90.5-by-59-inch digital prints by the South Korean photographer Hyung S. Kim towers over the exhibition. In them, the faces of two women, both South Korean deep-sea divers, poke from tight orange wetsuits, radiating compassion as they peer down over the other works on display. The women seem to share each experience with the viewer.

Surprisingly playful, given its subject matter, is Japanese collective United Brothers’ meditation on the meltdown at the Fukushima Daiichi nuclear power plant in 2011. Through audio, video, photographs, posters, tabloid newspaper coverage, legal documents and even daikon radishes, Does This Soup Taste Ambivalent? recounts the story of the collective’s performance piece, which they recorded a few years after the disaster. In it, the brothers and their mother cooked and served a soup made with radishes grown in the region and served it to gallery-goers. Documents pledged the ingredients had been tested for radioactivity and deemed safe—but would that be enough to convince anyone to try the steaming soup in the bowls they held?

“I think the artists are collectively interested in taking what we conventionally know or expect to know about global relations and upending it all through art that prompts long-term consideration,” Ohrenberger said.

“While I don’t think art can directly solve the world’s problems,” curator Feldman said, “and nor do I expect artists to be responsible for the mess that humans have made, the works in this exhibition reveal the nuanced ways in which we value, make meaning of, and shape the ocean through political, economic and cultural activities. Together, the works highlight a constellation of problems that humans have created and which only humans can repair.”