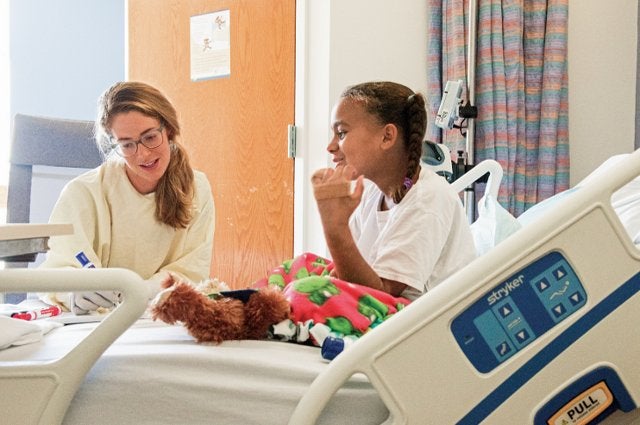 Nine-year-old Joy is sitting up in bed in her room at the Floating Hospital for Children, and she can’t stop laughing. She’s watching a cell phone video of her sister, Kristin. Jessica Evans-Wall, M19, seated next to the bed, is prompting Joy to think of some words to describe her sister for a poem they are writing together. “I would say chubby and funny and crazy,” Joy says between gasps of laughter.

Evans-Wall’s route to this bedside began with an influential undergraduate English class she took at Duke University called Poetry and the Healing Arts. The class looked at the poetry that emerged from the trenches of World War I, including the well-known 1915 ballad by John McCrae that begins “In Flanders fields the poppies blow / Between the crosses, row on row.” Poetry can be therapeutic in many ways, the professor said.

When Evans-Wall arrived at Tufts Medical School, she brought that message and that hope. With the guidance of Jennifer Greer-Morrissey, director of the medical school’s Community Service Learning program, she began volunteering her time one afternoon a week at the hospital, bringing poetry to the young patients.

Each week is different. Evans-Wall may divide her time among seven or eight patients or devote several hours to a single patient. In any event, she arrives with a clutch of poems, shows the kids a sampling and responds to whatever they like.

She’s found that even the youngest patients prefer substantive poetry by such authors as Browning, Tennyson and Mary Oliver over lighter fare—Lewis Carroll’s “Jabberwocky,” for example.

“I try to build an appreciation for what poetry can be,” says Evans-Wall, who has loved poems since she was a child, and in more recent years, working as a wilderness guide, has made it a habit to begin and end each day of a trek by reading poetry aloud to the campers in her care.

Watching her in action at the Floating, it’s clear she’s a natural teacher. “That’s great; that’s a good one,” she tells Joy after the girl offers up another adjective for their work in progress. “Now what would be another good word for that?”

The parents of the young poets in training appreciate the special touch that Evans-Wall brings into the room, says Andrea Colliton, director of Child Life Services at the hospital. They are grateful for the way she “gets their child sitting up in bed, taking their mind off whatever medical experience they’re going through, even for just a little bit,” she says.

One young patient with Down syndrome drew a more immediate lesson. Evans-Wall showed her a poem by E. E. Cummings. “I see he broke the rules,” the girl said in response to the poet’s jagged, uncapitalized lines. “Well, then, maybe I can break the rules, too.”

This story first appeared in the Winter 2017 issue of Tufts Medicine magazine.