Classroom to Clinic: A Patient of One’s Own 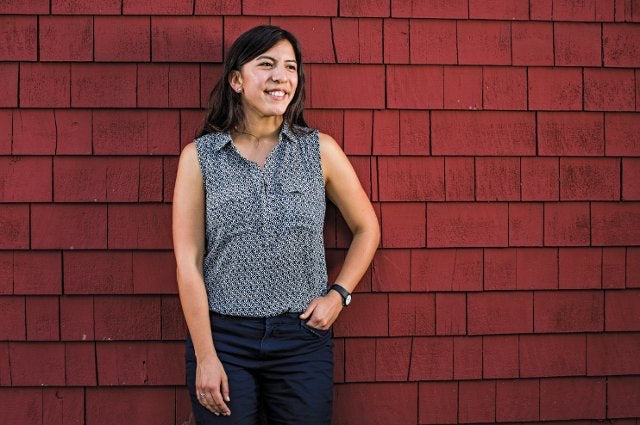 In this series, students from Cummings School’s Class of 2017 tell us about the excitement, anxiety and pride of beginning their clinical rotations.

On the Monday of my second week at the Tufts Wildlife Clinic, I was called in at 9 p.m. A woman had found a grounded blue jay. Walking into the clinic soon afterward, bird in box, I was excited to take this case on my own.

Twenty minutes later, the “grounded” blue jay had escaped my grasp not once or twice, but three times, on each occasion flying—well, I might add—around the room before I could catch him. “OK, Mr. Blue Jay, third time’s the charm,” I told him as I stood cupping him in a towel between my hands. After maneuvering a physical exam with no more escapes, I discovered a wound on the jay’s back and triumphantly reported my findings to the intern on the phone.

“All right, what do you want to do?” she replied. At this moment it hit me: I was no longer a work-study assistant at the clinic, as I had been for years. I was a fourth-year vet student, and this little bird was my patient. I would be in charge of the treatment plan. I would be the go-to person if problems arose.

Of more immediate concern, it would be up to me alone to administer fluids and buprenorphine for pain that night. For a solid 10 minutes, the blue jay, surely frustrated he couldn’t get away, had no trouble using his nails—or should I say mini-talons—to keep me from poking him. Having everything ready and knowing exactly what to do but not being able to do it because of a feisty 80-gram bird definitely falls into the “one-of-those-humbling-vet-school-experiences” category.

An hour after beginning my adventure, I finally placed the exhausted but comfortable blue jay in an oxygen tank for the night. When I came back the next morning, I only had one thought in my mind: “Please let Mr. Blue Jay still be alive.” Sure enough, he was, and he was ready for round two. I walked by the room where one of the clinicians was examining him just in time to see him wriggle his way out of her hands.

My struggles with that blue jay marked the beginning of my transition from the classroom, filled with hypothetical cases, to the actual practice of veterinary medicine. I spent the rest of the week assuming more of a “these-are-my-patients” perspective. Of course, there was and still is an army of experienced clinicians and staff right behind me—after all, I’m just getting my feet wet here.

Still, I’m more aware than ever that when I’m on clinics I’m the first line of care for patients, and that alone changes one’s perspective. At the wildlife clinic, I approached daily treatments with a greater sense of purpose, euthanasia hit closer to home, and when, like Mr. Blue Jay, patients improved, or were even released, the experience was that much sweeter.

Other articles in the series:

“Classroom to Clinic: Happiness Upon Happiness,” by Nancy Boren, V17.

“Classroom to Clinic: The Thrill of Competence,” by Alexa Ortiz, V17

“Classroom to Clinic: My First Appointment,” by Jessica Mintz, V17