A Flesh-Eating Parasite Returns to Florida

After being banished 50 years ago, screwworms invade the Keys and threaten an endangered species of deer 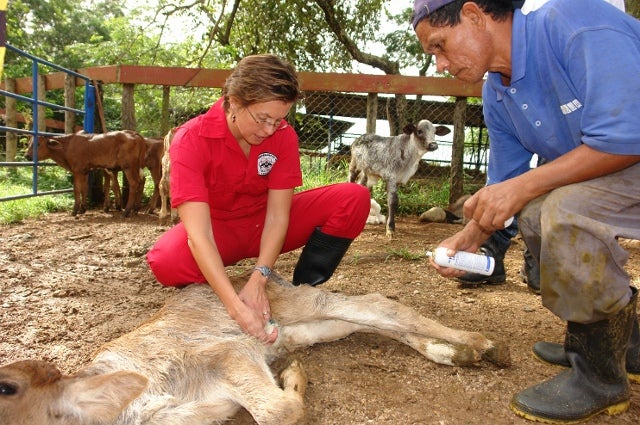 A flesh-eating parasite that has re-emerged in the United States after more than a half-century has killed a fifth of the endangered Key deer on the Florida Keys since last fall. In January, a stray dog near Miami was successfully treated for these New World screwworm parasites, fly larvae that feast on open wounds in warm-blooded animals.

Cynthia Duerr, V99, led field operations for the U.S. Panama Commission for Eradication and Prevention of Screwworm from 2008 to 2011 as an agricultural science officer with the U.S. Department of Agriculture. Now she’s working with 24 countries in Africa to help protect livestock from Old World screwworm, a close cousin of the pest identified in Florida, and from other contagious diseases. The last reported case of screwworms in the United States occurred in 1982 in Star County, Texas.

Duerr talked with Tufts Now about the history of screwworms in the United States and the implications of the Florida infestation.

Tufts Now: What is screwworm?

Cynthia Duerr: Screwworm is the larval state of the screwworm fly, known as Cochliomyia hominivorax. These flies feed on flowers and plants, but lay eggs at the edges of wounds on warm-blooded animals, including people. The flies 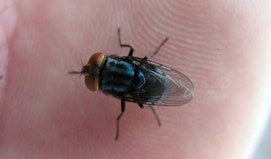 A screwworm fly. Photo: Courtesy of Cynthia Duerr
can detect a wound from a long distance, and they release pheromones that attract even more flies. Hundreds and thousands of eggs can hatch into larvae that burrow into the wound. The wound can grow quite large because of this infestation and can be fatal if not treated—hence the fly’s Latin name hominivorax, which roughly translates as “man-eating.”

Human cases of screwworm are rare, but they have occurred.

Why is the arrival of screwworms in Florida such big news?

This was immediately worrisome because we have not seen screwworms there for more than 50 years. They were found regularly in Florida and the southern United States until the mid-1960s. During the summer months, screwworms could be found as far north as Nebraska and even Canada. It caused great expense to the cattle industry. Cowboys did more than move animals from place to place in those days; they treated wounds to prevent screwworms.

After World War II, two USDA researchers, Raymond Bushland and Edward Knipling, developed a method called the sterile insect technique, which used radiation to sterilize hordes of screwworms. Female screwworms mate only once in their lifetimes, so when they mated with the sterile males, no larvae were produced. The continued release of sterile flies into the wild essentially meant that females were more likely to find a sterile mate, and over time, there were fewer and fewer fertile flies until they were eradicated.

By 1966, the United States was largely screwworm free, saving $900 million annually in costs associated with the production of livestock.

What was your role in fighting the infestation?

I led a team of 150 field veterinarians and technicians who worked with communities throughout Panama to provide surveillance and diagnosis of screwworm outbreaks. I also oversaw the program that hatched sterilized screwworms to create sterile adult flies. These flies were then loaded on planes for dispersal over the screwworm barrier zone between Panama City and Colombia.

Why has screwworm shown up in the United States again?

While adult screwworm flies can travel long distances, they do not generally travel over open water. It is therefore likely that screwworms hitched a ride from somewhere else where the flies still exist. Over the years, screwworms have occasionally been found on animals—or even a person—traveling to the U.S. from other countries, but the parasite has always been detected and treated before it found another fertile fly and laid eggs. In the case of the Florida outbreak, it would appear at least two flies, in some form, arrived in a tropical climate where warm weather allowed the life cycle to be completed.

What is troublesome about the reemergence of the parasite?

The biggest concern would be if screwworms spread off the Keys to other parts of Florida or to other states. Flies normally have a range of about 15 miles. In one reported case, a fly traveled almost 200 miles. It is possible, however, that for part of that distance it was transported in a car or truck. This is a worry now. Everyone is familiar with having a pesky fly riding along in the car! If some flies were to hop in at Big Pine Key and hitch a ride to Miami or farther, that would make this new infestation more difficult to eliminate.

Screwworms can also spread on an infected person or animal, or even by transportation of soil containing fertile pupae. For this reason, the Florida Department of Agriculture has placed temporary restrictions on the movement of all animals in or out of a quarantine area from Key Largo south.

Can we eradicate the screwworms again?

When screwworm flies were first detected in Florida in late September, the USDA’s Animal and Plant Inspection Service began working with state officials to eliminate the pest once again by releasing sterile flies. Our techniques have gotten better since the 1950s. On an island, eradication could take as little as 10 weeks, depending on the extent of the problem. Control, quarantine and surveillance will continue for a longer time, to be certain.

What are symptoms of screwworm infestation? How is it treated?

The first thing that might be noticed in livestock, a pet or even a person may be an unusual odor. On closer examination, you would find a wound and see larvae (maggots). The immature larvae are very small and may not be visible, but the mature larvae are big enough to see. Anybody seeing these should immediately contact their veterinarian or an animal health officer or call 1-800-435-7352.

It is very important that samples are taken before the wound is treated with normal wound care and an appropriate larvicide. The animal will recover in most cases. If the wound has become heavily infested, however, it might be too large to heal. That is why the infestation can be fatal if it is not detected early and treated, which is more likely the case in wildlife.

Prevention is always the best measure. Pets and livestock in an outbreak area should be checked daily for wounds. Fly repellents can also be used as a preventative.

Is this a serious conservation issue for the Key deer?

I am afraid it is. Because wildlife are not monitored for wounds, these animals are more vulnerable. So far, 135 Key deer, from an estimated population of 700 to 800, have died from wounds associated with this parasite. Efforts are being made to treat the remaining animals with an oral anti-parasitic medicine.